Unlike tually acter that Megan some come to Follows made actors loathe them has who the famous, nothing evencharbut kind words for Anne of Green Gables. “Anne opened so many doors for me,” says Follows of the red-haired waif from Prince Edward Island she portrayed in two CBC mini-series in the 1980s. “She was a great female character, and there aren’t a lot of them around. Most of the time, they are defined by their relation to others—‘wife of’ or ‘mother of type roles.” Follows, however, has worked steadily in a wide range of television, film and theatre roles since she moved to Los Angeles in 1983. In her latest movie, Reluctant Angel, an offbeat romantic comedy that recently finished filming in her native Toronto, Follows, 29, plays Cheryl, a scam artist who mistakenly believes she has run over a drunk. But he, in turn, thinks she

has saved his life and could be his guardian angel. “It’s a gem of a story,” says Follows, “and it was an independent production without government money, so I hope it gets support.”

Upon completing Reluctant Angel, the divorced Follows, her five-year-old daughter and three-year-old son headed off to Wolfville, N.S., where she is rehearsing the role of Sonya in an Atlantic Theatre Festival pro-

duction of Uncle Vanya, which runs from Aug. 1 to Sept. 13. Follows says she enjoys working in both mediums, although the transition is not always easy. “Film and theatre both have the same objectives, they want to be good and truthful and tell a story. But you have to apply different disciplines.” Adds the actor: “And in theatre, with its live audience, you know when you’re stinking. It can be a humbling experience.”

Carrying on at the CBC

Mary Lou Finlay, the newly announced host of As It Happens, tends to look on the bright side of things. Named as Barbara Frum’s co-anchor on the original 1982 edition of The Journal, she swiftly found herself sidelined as Frum commandeered the solo spotlight. Left with little to do, Finlay transformed herself into a leading documentary reporterproducer, and recalls that period as some of the best years of her career. Moving to CBC Radio in 1988, she took over the host’s slot on Sunday Morning, but six years later she was abruptly informed in mid-season that, in a planned makeover, her talents would no longer be needed. Then, after

pioneering a new media program, Now the Details, in 1994, Finlay learned a year ago that it would not survive past this spring’s budget cuts. "It’s a bit like living in a war zone," she jokes. “You get used to a bit of carnage and you carry on.”

With no firm job offers from the network, Finlay made plans to produce her own TV documentaries and series. “I just assumed I would be making my own future,” she says. “There’s no point in sitting around and moping." Then, in May, just as she was set to launch those projects, she was handed As It Happens, which, ironically, Frum had originated in 1971. The nightly slot—

what Finlay, 50, calls “the best job in radio"—opened up when current host Michael Enright agreed to take over Peter Gzowski’s morning post. But after her run of bad luck, Finlay admits that, until the formal CBC announcement last week, she was afraid to believe it. Now, she stresses that, although the show will stay the same, her style will differ from Enright’s trademark wryness. Still, when asked to define her own on-air personality, she turns to a critic’s less than laudatory description: bland. “I don’t object to that,” Finlay says. “I want to be neutral. I don’t think you can call people up, invite them on your program and then dump all over them.” 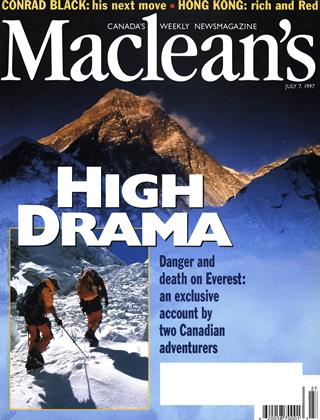