They just have no taste. They don’t think of original ideas.

Steve always yells at me.

Russians and Americans. Israelis and Palestinians. Hatfields and McCoys. Until last week, Microsoft and Apple were locked in the computer world’s most publicized example of a long, bitter and sometimes pointless feud. But all bad things, it seems, must come to an end—and so it was for Steven Jobs and Bill Gates as they ended two decades of sniping at each other and opted instead for an awkward embrace. And as with other famous standoffs, this one ended with the protagonists seemingly surprised that it had gone on so long. “The era of us thinking that we compete with Microsoft is over,” Jobs told a gathering of Apple loyalists in Boston as a grinning Gates loomed over him, projected by satellite onto a giant screen. “We have to let go of the notion that for Apple to win, Microsoft has to lose.”

In the short run, at least, the deal the two men worked out pulled Apple back from the brink of potential disaster. Devotees of its Macintosh computers are legendary for their fierce attachment to its innovative and elegant technology—but they are a dwindling band. The company’s share of the U.S. market for desktop computers is barely four per cent, down from double-digits a year ago (its Canadian share is slightly bigger, about six per cent). Consumers had simply lost confidence that the company would survive. At the same time, Apple’s management ranks were in chaos, with a dozen executive-level departures since last fall. The company posted cumulative losses of $2.3 billion in the past seven quarters, and many analysts were close to giving up on it Instead, Apple won Microsoft’s endorsement and support, as well as an investment of $205 million in Apple. This will give Microsoft a five-per-cent stake in the company. At the same time, Apple agreed to drop its legal claims against Microsoft, which it had accused of appropriating its pioneering point-and-click operating system, for another undisclosed payment (some reports put it at an additional $100 million). Initial market reaction was strongly positive: Apple’s stock shot up 48 per cent in two days, closing the week at $26.81 a share. That made Apple look good for the first time in years—and brought Microsoft a quick windfall. “For Microsoft, it has been a very shrewd investment,” noted David Readerman, an analyst with Montgomery Securities in San Francisco. “They have recovered a third of their cost in two days.”

Indeed, Microsoft and Gates himself are the big winners. He is, of course, the world’s richest man (estimated wealth: $41 billion) and the company he founded in 1975 in Redmond, Wash., has cash reserves of some $12.3 billion. The

Worldwide computer sales of Compaq and Apple (in per cent)

money he invested in Apple could be little more than a rounding error in Microsoft’s finances, but the company accomplished several key goals. Among them, making sure that its software dominates the fast-growing market for browsing the World Wide Web. As part of the deal, Apple agreed to install Microsoft’s Internet Explorer browser on Macintosh personal computers. That gives Gates’s company an advantage over its rival, Netscape Communications Corp. of Mountain View, Calif., which produces the popular Navigator browser.

The Apple deal gives Microsoft an edge over an even more important rival: Sun Microsystems Inc., also of Mountain View. Sun invented Java, the computer programming language that threatens Microsoft’s nearcomplete control over standards in personal computer software. In fact, some analysts suggest that while Microsoft and Apple have been squabbling over desktop operating systems, Java has the potential of putting them both on the sidelines by making more and more applications operate through the World Wide Web. Last week’s deal attacks that concern head on: Microsoft and Apple will strike back at Sun by collaborating in developing their own version of Java. And finally, by helping to keep a weakened Apple

alive, Microsoft will be less vulnerable to charges that it monopolizes the software market—and will be better able to defend itself against any antitrust challenge in the United States.

Still, the rivalry between Apple and Microsoft had gone on so long that Jobs’s announcement at a Macworld trade show in Boston initially drew boos and jeers. An appearance there by Gates, joked one analyst, was “like putting Darth Vader up at a Star Wars convention.” Apple loyalists, though, were quick to recognize that Microsoft’s support might go a long way to ensure their brand’s survival. At an Apple outlet in Toronto called Elm Street Appland, co-owner Art Lupinacei displays a sign that reads: “Proudly Macintosh.” For him, the old rivalry was outdated: ‘The real die-hard Apple users believed Microsoft was the enemy. Everyone loves a battle, and there was sort of a romantic notion that Microsoft was the enemy. But that’s old news.” Steve Graham, vice-president of software research at IDC Canada in Toronto, agreed. “Years ago, you didn’t expect these companies to be working together,” he said. “But it makes more sense to partner with your rivals than beating yourself to death trying to compete with them.”

Despite their recent and well-publicized spats, Gates and Jobs have a history of co-operating as well as competing. Born within four months of each other in 1955, both are brilliant pioneers of the computer world who dropped out of college to found their companies in the mid-’70s. Gates took Microsoft from strength to strength, aggressively marketing successive versions of the Windows operating system to achieve overwhelming dominance in

the software market. Microsoft was also an early producer of software for Macintosh computers—a market that is still worth some $550 million a year to Gates’s company.

By comparison, Jobs is more creative, more mercurial—and less successful as a business strategist. In the early 1980s, he pioneered the now-familiar system whereby desktop operators click on icons to operate their computers. But over the next few years, Apple saw Microsoft run away with its market. In 1985, Jobs himself was ousted from Apple in a messy corporate struggle. He went on to found NeXT Computer Inc., which won praise for its technological innovations but was never profitable. And he bought Pixar Inc., the computer animation company behind the movie Toy Story. He is chief executive of that firm, and his stake in it is now worth some $685 million.

But in the end, Jobs came back to Apple—the company he calls “my first love.” Last December, he sold NeXT to Apple for $590 million in a deal that renewed his association with the company. At the time, Apple was sliding down a steep slope: losing market share, I bleeding money, and without clear direction. In mid-March, then-CEO Gilbert Amelio eliminated 4,100 jobs, almost a third of Apple’s workforce, in a bid to cut costs and stop the rot. But on July 9, Amelio himself was dumped by the company’s board of directors.

It appeared that Apple had hit rock bottom, but Amelio’s departure cleared the way for Jobs to effectively seize the reins again. His only official position was as a special adviser to the company, but he began intensive talks with Gates and Microsoft’s chief financial officer, Greg Maffei. Over the following month, they worked out last week’s deal. At the same time, Jobs took steps to overhaul Apple’s board, which had presided over the company’s disarray. In Boston last week, he announced that four of its members were out. Their places were taken by a group of industry heavyweights—including Lawrence Ellison, chairman of Oracle Corp., the database giant, and William Campbell, chief executive of Intuit Inc., the leading producer of personal finance software. Jobs also joined the board, taking over as interim chairman until a replacement is found.

Those moves encouraged both industry analysts and Mac enthusiasts. But Apple’s future is still not assured. The Microsoft deal, says IDC Canada’s Graham, “is a stopgap. It’ll buy them some more time to make some changes.” At the core of Apple there are still fundamental problems. Its market share continues to shrink; it is no longer at the cutting edge of new technology; and it has suffered huge losses of talent. Not even a coup like last week’s peace treaty with Microsoft could make those long-term worries go away. 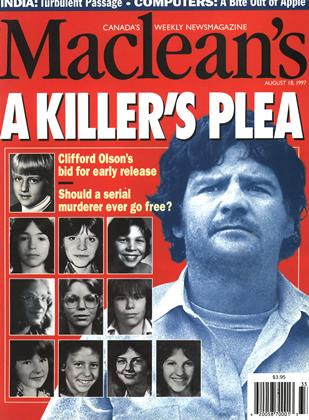