Paul Beeston was at his usual station, an easy chair well removed from the clutter of his desk. Out the window of his SkyDome office, the morning rush-hour crush inched past on the Gardiner Expressway. Inside, Beeston, with his feet up on the coffee table and a cigar in hand, was inching towards a decision. “When am I going?—that’s the question,” the garrulous chief executive of the Toronto Blue Jays was saying. “Hell, where am I going?—that’s a good question, too.” He laughed. To many insiders, the answers were obvious, even a week before he formally accepted the job of president and chief operating officer of major-league baseball in New York City. Baseball needed help,

and Beeston was just about everyone’s first pick to provide it. Still, the man himself had reservations, or perhaps he was just being coy. “Maybe they don’t like loud people down there,” he suggested. In New York? “Good point,” he said, laughing again. Then: “Maybe they won’t let me smoke cigars in the office. You never know.”

The man players, friends and even strangers call “Beest” finally ran out of excuses not to go to New York and take over America’s national pastime. The new post he assumes on Aug. 1 is, in muffled, cigar-in-mouth Beestspeak, “a helluva job.” Reporting to interim commissioner Bud Selig, he will be responsible for marketing the game and for reorganizing the commissioner’s office, which has been in a state of suspended animation ever since baseball’s owners fired the last

commissioner five years ago. Staff in New York may not be ready for his hollering, his smoking, his early-Beatles haircut and his rose-colored Giterally) glasses. But they are elated that he is finally going to take charge, as are most owners, the players association and even Beeston’s wife, Kaye. “It’s sad to be leaving,” she says, “but really, I love New York.” Beeston was enthusiastic about his new duties at a packed Toronto news conference last week, and he managed to say his thank-yous without sputtering. But earlier in the day, he was his usual, emotional self. “He had to read from notes when he told the staff because, otherwise, he would have fallen apart,” says his longtime assistant, Sue Cannell. “Three-quarters of the people there were crying.”

Clearly, baseball’s new No. 2 man wears his heart on his sleeve—hardly the image expected along Manhattan’s corridors of power. But then, Beeston’s emotion may

also be the game’s saving grace. He absolutely loves baseball—thinks it is the world’s greatest game, even better than (forgive him) hockey. The major leagues need that enthusiasm after bottoming out following the labor dispute that cancelled the 1994 playoffs and World Series. Collectively, the owners lost $255 million last year, and $1.2 billion since the strike. And while revenues are up this season, so too are player salaries. More ominous is the game’s aging fan base and the precipitous decline in interest among kids. ‘We have to develop a trust with the fans that we had in 1993 and 1994—before the strike,” Beeston says.

It could be just as tough bringing order to the commissioner’s office. “For most owners,” said one league official, asking for anonymity, “the commissioner’s office is just a mailing address.” That is actually by design: when the owners ousted Fay Vincent as commissioner in 1992, they appointed Milwaukee car dealer and Brewers boss Selig to fill in. Selig proved a dutiful front man for hardline owners, presiding over the cancellation of the Series in 1994 and the lockout of players the following spring. Beeston, while regarded as a moderate during the labor wars, defends the much-maligned Selig. With limited power and resources, Beeston points out, Selig convinced owners to accept a modest revenuesharing clause, successfully negotiated U.S. network-TV deals, and boosted fan interest through realignment and inter-league play. “History will be a lot kinder to Buddy than it’s being right now,” Beeston says.

The owners were willing to let a native of Welland, Ont, r un their game day-to-day partly because of his Canadianness. Baseball has endured more labor strife than other sports because of the intransigence of its battling factions. Beeston, meanwhile, is a consummate peacekeeper/conciliator who managed to keep a foot in both camps even during the strike. “He has excellent personal relationships with just about everyone in the game,” Selig said. Players union boss Donald Fehr agreed. “This is a good day,” Fehr said when the appointment was announced. “He has a proven track record, and enjoys the respect of everyone in the game.”

The longest-serving Blue Jays employee, Beeston played a key role in elevating the team from expansion ineptitude in 1977 to back-to-back World Series victories in 1992 and 1993. He left his job as an accountant with Coopers & Lybrand in London, Ont., to tend the team’s books, but later formed a fruitful ruling partnership with Pat Gillick, the general manager who was as studious and reserved as Beeston was loud and funloving. As Gillick cultivated the on-field talent, Beeston, who became president and chief executive officer, built a $100-million-ayear business while being schooled in the game by Bobby Mattick, a longtime scout and the team’s second manager.

Unlike most baseball executives, Beeston is close to the players. “This organization is

very family-oriented,” says outfielder Joe Carter. “You couldn’t ask for a better place to play.” That helped the Jays woo free agents. Roger Clemens, for instance, was being pursued last winter by a half-dozen teams, but he chose Toronto after Beeston visited the pitcher’s Houston home. Clemens says Beeston talked passionately about the Jays wanting to win another World Series. “He was probably the most important factor in my decision,” Clemens recalls. “And he didn’t even talk about dollars.”

The Jays have their own problems. They have struggled on the field, and attendance and broadcast revenues are below historic highs. An optimist, Beeston says the team has good staff, good fans, talented major-leaguers and excellent prospects in the minors. Still, he admits, “I was hoping to see the team in first place when I left. It would be great to be like Ted Williams and hit a home run in your last at-bat.”

As well, the entire organization has been on uncertain footing for two years, ever since Belgian brewer Interbrew bought Labatt and put the Jays, Toronto Argonauts and its share of SkyDome up for sale. Beeston and the other SkyDome owners—The Toronto Sun, Conrad Black, and CIBC, among others—looked into buying the whole package, but were scared off by the asking price: an estimated $276 million. Since then, the only serious bidder has been a group led by Toronto real estate developer Murray Frum, which has yet to gain major-league baseball’s full approval. While Beeston refuses to discuss the sale, insiders say the team’s relations with Interbrew grew frosty as the sale process dragged on. Interbrew had appointed Alan Chapin, a lawyer from New York who is one of the company’s North American directors, to handle the sale, leaving Beeston out of the loop.

Beeston says he has no regrets, though. The timing for a move is right—both his daughter, Aimee, and his son, David, are in university. And before he cleared it out, his office walls were jammed with mementoes marking a happy tenure—mostly pictures of friends and players at parties. One of them shows Paul Molitor, an ex-Jay now with Minnesota, hitting a 1993 World Series home run for Toronto. In part, its inscription reads: ‘Thanks to you, I not only experienced a world championship, but also playing for the best organization in baseball.”

Asked if he had a most-cherished memory with the Jays, Beeston looked around the office. ‘Too many of them to choose from,” he said. His toughest day? “That’ll be when I walk out that door for the last time,” he said softly, his voice cracking a bit. “That—that will be tough.” Then, cheerfully and with the volume back up to its usual level, he added: “But I’m keeping my parking passes. They’ll have to kill me to get those.” After 22 years, the guy knows what’s important in Toronto. □ 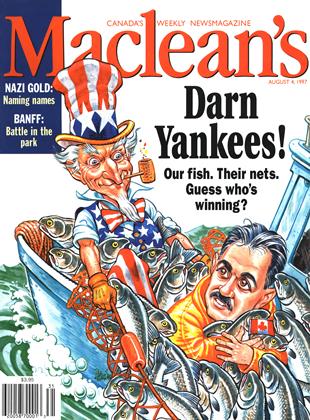