Canada’s problem, as with Rodney Danger-field, is that it just don’t get no respect. It is not, as imagined, because with a mere 30 million bodies we don’t count on the world population meter. It is not that we have never had a civil war, or that Canadians—the surveys tell us— talk more on the telephone than any citizens on earth.

None are the reasons why we are so impoverished on the global scale. Ottawa has just been pleasured by the visit of British Foreign Secretary Robin Cook, who illustrates the high standards that other countries can brandish when it comes to juicy matters in bed.

Mr. Sleaze, in one fell swoop, has dashed the pristine hopes of Tony Blair’s “New Labour” with all its talk of family values, a welcome change from those dreadful Tories who were always leaping into the sack with other ministers’ wives. Cookie has done it all.

The foreign secretary is considered the intellectual superior to those two other Scottish-trained boys, Blair and Chancellor of the Exchequer Gordon Brown. He feels he was cheated out of the role of prime minister, however, because he is what is called facially challenged. He has acknowledged he has “all the sexual allure of a garden gnome.”

He apparently, however, has other attributes. Last Aug. 1, he was in the VIP lounge at Heathrow with his wife—a highly respected doctor who made more money than he did before he became a cabinet minister—about to fly off for a three-week holiday in the U.S. His cell phone rang. It was Blair’s office, warning him that a tabloid the next day was to break the story of his affair with his secretary, one Gaynor Regan. The message from the PM: it’s either the wife or the mistress.

Cook, the architect of Cool Britannia’s foreign policy, put down the phone and informed his wife that their 28-year-old marriage was over. Now, that’s cool. His 24-year-old elder son went to Heathrow to wave his parents off—only to be told things were gonesville.

How can this dull country compete with stuff like that? Especially when the most powerful man in the world, running the most powerful nation on earth, is facing a May court case where a girl with big hair is going to claim that she can identify a peculiar bent to his ying-yang? The competition is not fair.

We haven’t had a good giggle since Gerda Munsinger, the goodtime Munich girl, rocked the Commons with her affair with the Tories’ Pierre Sévigny, who had lost a leg in our First World War. The RCMP, while investigating, identified him only when their listening device figured out the signature thump was his wooden leg being dropped on the bedroom floor.

The flamboyant George Hees, John Diefenbaker’s most handsome minister, allowed during the subsequent hearings that he indeed had lunched with Gerda, but nothing more. The Ottawa press gallery, under the leadership of president Charlie Lynch, for its annual black-tie dinner had a mural of a naked Munsinger painted on the entire wall of Parliament’s Railway Committee Room.

Lynch escorted his guest Hees into the room. The entire gathering, excited, froze. Hees, elegant as ever, gazed at it for a few moments and announced: “I think they’ve got the eyes wrong.” This, admittedly, is not up to the Kennedys, wherein Teddy, as someone said, is “the only senator who goes to spring break in Florida.” We know all about Chappaquiddick and Michael Kennedy, who lost an argument with a tree in Aspen, who destroyed his brother’s bid for the governorship of Massachusetts by the revelation that he, Mike, had conducted a long affair with the family babysitter starting when she was 14.

Canada has a tough time matching this. At François Mitterrand’s funeral, his wife, his daughter and his mistress stood side by side. All we have is a Reform MP from the Okanagan Valley who shouts about “gonads” and wants to go out in the alley to settle things. It doesn’t really scan.

Christine Keeler and Mandy Rice-Davies brought down the Harold Macmillan government when war minister John Profumo lied to the Commons that he did not know Christine in the biblical sense. When Margaret Trudeau ran off with the Rolling Stones, it didn’t destroy her husband’s government.

Instead, in his 70s he fathered a child by a woman young enough to be his granddaughter and now eats spaghetti, happily, with her, her happy newspaper columnist husband and the kid. Very Canadian. No muss, no fuss.

In Thailand a woman, à la Lorena Bobbitt, cuts off her husband’s penis, ties it to a helium balloon and sees it fly off to oblivion. In the United States, journalist Seymour Hersh, who offers proof that John Kennedy daily swam in the White House pool with naked aides called Fiddle and Faddle, is pilloried by JFK fans.

In Canada, a publisher still pleads with a divorced wife of one ex-premier to spill the goods. We have to get on the ball. If we want any respect. 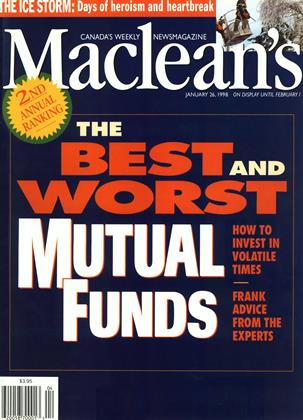