The eagerness of Monte Solberg's attack gave away the fact that he had a zinger to deliver. Leading off Question Period on Sept. 28 by asking Finance Minister Paul Martin about the multibillion-dollar surplus piling up in the Employment Insurance account, the Reform finance critic wasted little time in feeding the TV newscasts their clip of the day. "Why does the minister not just drop the money and walk away, slowly, and keep his hands where

Canadians can see them?” Solberg asked, adopting the stern tone of a cop who has caught the perpetrator red-handed. There was no snappy answer for that one. Later, Martin gave Solberg credit—one skilled parliamentary performer to another—when they met at a dinner for Commonwealth finance ministers in Ottawa. “Paul said, ‘I’ve got to give the devil his due—that was very good,’ ” Solberg told Maclean’s. “And I said, ‘Paul, I’m an actor—I was given my line and I delivered it.’ ”

But there was more going on in the highly charged debate over El than mere House of Commons theatrics. Solberg’s one-liner resonated by playing on the growing fear in Liberal circles that Martin’s per-

sonal credibility—the rock Prime Minister Jean Chrétien has built his government on—might for the first time be showing cracks. At issue is whether the government should keep on pulling in far more in El premiums year after year than it pays out in benefits. This year, the program is expected to be $7 billion in the black. The Reform party, the provinces and business lobbyists are demanding a sharp cut in the premiums paid by workers and employers, to bring the program’s accounts into balance. Martin counters that El surpluses, which helped him wipe out the deficit, should be maintained to pay for new programs and allow other taxes to be cut. “This time, he doesn’t have an elaborate policy justification,” Solberg said. “He’s just saying, We need the money—and we’re going to take it.’ ”

Martin might well wish it were that simple. In fact, the controversy over how Ottawa should be allowed to use the surplus stems from the complicated history of unemployment insurance. The program, launched in 1940, only recently evolved into a cash cow. Through most of the 1980s, the safety net for Canadians who lose their jobs payed out much more than it brought in; it had to be topped up annually from general federal revenues. In 1986, the then-Conservative government took the advice of the auditor general and rolled the fund into the main

With the Employment Insurance fund running a huge surplus, Ottawa is under pressure to give Canadian taxpayers a break

government accounts, so the financial drain would be clearly reflected in the budget. After the recession of the early 1990s, however, unemployment fell and the new Liberal administration tightened up the rules for collecting benefits. As a result, the El account began racking up surpluses—just in time to contribute mightily to Martin’s drive to balance the budget. Now, the government is loath to give up the revenues it has come to rely on.

But the program was never designed to be just another tax. The Employment Insurance Act dictates that the premiums paid by workers and companies must be set at a level that ensures there is enough money to pay benefits. The act allows premiums to be set high enough to generate surpluses in good economic times, but only enough to offset any shortfalls when a recession hits and unemployment spikes up. Back in 1995, the government estimated it needed to build up a buffer of about $5 billion in the El account as a hedge against hard times. But by the end of this year, that accumulated surplus will have swollen to $20 billion. Any pretense that the program is being run as a stand-alone insurance fund has long since been dropped. Instead, Martin contends that excess El revenues give the government a cushion in uncertain economic times and the flexibility to pay for other good things. “This means that we will invest in health,” he said last week in the House. “It also means that we will lower personal taxes for Canadians.”

Martin now faces a politically dangerous confrontation with the Employment Insurance Commission, which oversees the program. Each fall, the commission—a tribunal made up of a commissioner

representing unions, a second representing employers and a third named by the government—recommends premium levels for the next year. Last year, the commission pressed a reluctant Martin into dropping the rate by 20 cents—twice the amount he had planned for 1998. The premium paid by workers was shaved to $2.70 for every $100 they earn, up to a maximum of $1,053 a year. (The employers’ rate is always set at 1.4 times the employee premium, or $3.78 this year for every $100 of payroll.) That 2(Lcent cut cost the government about $1.4 billion—an easing of the payroll tax burden for which, Martin’s advisers gripe, the Liberals got little credit.

This year, the commission is leaning towards asking for a cut of up to 50 cents, which would come close to meeting the legal requirement that premiums should reflect the demand for benefits. A rate cut of that magnitude would cost Ottawa $3.5 billion next year and rule out any personal tax reductions or significant new health spending in the 1999 budget, according to senior Liberals. Still, even officials opposed to such a steep reduction concede the commission may feel it has little choice but to recommend a rate low enough to comply with the law. “The commissioners are following the rules of the game,” admitted one senior finance department official.

Martin has responded by considering changing those rules to suit his game plan. Among a range of options he has asked the cabinet to consider is a bold move to amend the act to let premium levels remain higher than is needed to fund the El program alone. The government cannot delay making a decision for long: the premium rate for next year must be set no later than December, to give Rev-

panies what formula for payroll deductions to use next year. The prospect of Martin moving

decisively has the government’s critics crying foul— and smelling blood. “If they change the law, they will just be hiding the fact that hardworking Canadians are paying much more than they have to,” Alberta finance minister Stockwell Day told Maclean’s. “In Alberta, we call that misappropriation of funds.” Day said the provinces will unanimously urge Martin to accept a $2.20 rate at a finance ministers’ confer'“VN ence in Winnipeg later this month.

In a telephone interview from Washington, where he was attending the semi-annual meeting of the

going turmoil in the global economy makes this the wrong time for the government to contemplate dramatic cuts to El premiums. He argued that stripping the federal books of those hefty El surpluses would leave Canada’s national finances looking much weaker to international markets. And that would undermine Ottawa’s ability to keep interest rates low, he added. “The world economy may be in for a really tough—what?—six months, year, 18 months or two years,” Martin said. “My main responsibility as finance minister is to make sure that this country can weather the storm.

I have to use every tool at my disposal, and the El fund has been part of that from the beginning.”

“Have these people got any idea what’s happening in the world?” But he would not go into details about how he plans to navigate around a possi-

ble messy clash with the Employment Insurance Commission over setting next year’s rate. He hinted, however, that he favors stopping short of a full overhaul of the act. “The government is not going to do something illegal, but the government does have the means of dealing with this kind of an issue, even if it deals with it on a transitional basis,” he said.

Some of the Liberals’ adversaries are drawing parallels between the storm Martin is weathering now over the El situation and the sustained pressure Chrétien has been enduring over the security crackdown at last year’s APEC summit in Vancouver. ‘The two untouchables in this government were Chrétien and Martin,” Walter Robinson, federal director of the right-leaning Canadian Taxpayers Federation, declared with satisfaction. “Now, they are both facing stuff that will stick.”

Just how sticky the El dispute turns out to be for Martin could depend on how badly his Teflon is scratched by another controversy. Last week, the firing of the Canada Pension Plan’s chief actuary, Bernard Dussault, exploded from an obscure case of bureaucratic infighting into a full-blown political uproar. Dussault says he was dismissed in August because a review he was conducting into the CPP was about to reveal potentially embarrassing problems with the plan’s finances. He

will not discuss details, but one possibility is that his assessment would have shown the CPP deduction from Canadians’ paycheques might have to rise above the 9.9-per-cent maximum rate promised by the government when the plan was overhauled last year. Dussault says he was twice asked to alter numbers to avoid embarrassing Martin—and refused. “It’s not that I’m not a team player,” he told Maclean’s. “It’s that to maintain the objectivity I need to prepare a report, I cannot be subjected to bad influences.”

federal superintendent of financial institutions, held a news conference last week to refute the allegation that politics was behind the chief actuary’s dismissal. Palmer said he fired Dussault over managerial differences, largely because other bureaucrats had long found it hard to work with him. And after Dussault publicly named Palmer as the official who tried to interfere with the evaluation of the financial health of the pension fund, Palmer announced he was suing Dussault for defamation. Under fire over the issue in the House, Martin denied any involvement. “I

never discussed this matter with Mr. Palmer,” he said. “And Mr. Palmer, as he has stated himself, told me after the fact that he had asked Dussault to resign.”

Still, the questions raised by the Dussault affair have left Martin in an uncomfortable position. Employment Insurance and the Canada Pension Plan, the two big federal payroll deductions, tend to be lumped together as policy concerns. Any attempt now to step in openly to change the way El premiums are set may inevitably be linked to Dussault’s allegations of clandestine political tampering with the CPP. The opposition parties are already linking the two issues. One senior Liberal official, who asked not to be named, said Martin is anxious to avoid being forced into taking any heavy-handed action on El this fall. He is holding out hope that the Employment Insurance Commission can be persuaded to scale down its demand for a large cut in the premium for 1999. The commission is scheduled to make its formal recommendation in November. If no deal is reached by then, the government might choose to introduce legislation to overrule the commission’s advice and maintain a higher rate. Such a move undoubtedly could save the government billions. How much it might cost Martin in terms of hardwon political capital is harder to calculate. □ 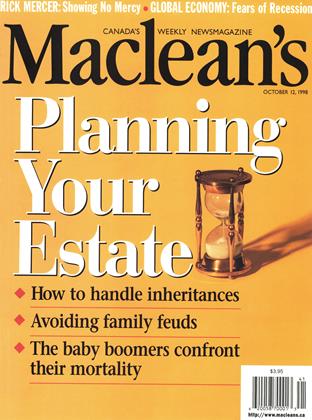