A case of loose lips

There is plenty to gossip about at the Lord Beaverbrook Hotel in Fredericton these days. For years, a collection of local lawyers, businessmen, politicians and backroom party types—most of them Liberals—have gathered Saturday mornings in the hotel’s restaurant to sip coffee and discuss politics. The group of opinionated talkers has long considered one of their best listeners to be local MP Andy Scott, who is also solicitor general of Canada— the man in charge of the RCMP and the Canadian Security Intelligence Service. Last week, however, Scott got caught out for talking about confidential government business with a friend on an airline flight. In Ottawa, Opposition MPs mocked him as a loose-lipped braggart. His coffee buddies could hardly believe their ears. “He is a very circumspect guy,” said Fredericton businessman Fred Beairsto, a token Tory in the Saturday group. ‘This sort of action does not square with the man I know.”

But neither does the image of a dumbfounded Scott struggling to defend himself in the House of Commons after he learned that NDP MP Dick Proctor, who had sat two seats away from him on Air Nova flight 8876 from Ottawa to Fredericton on Oct. 1, had taken notes of Scott’s conversation. Proctor maintained he overheard the solicitor general predict to his seatmate that Prime Minister Jean Chrétien would never be connected to the scandal surrounding last November’s Asia Pacific Economic Co-operation summit in Vancouver. He recalled that Scott promised that a mid-level Mountie would take the fall for the APEC fiasco. As Proctor remembered it, the top cop in the land even spoke disparagingly about German-Canadian businessman Karlheinz Schreiber and former Newfoundland premier-turned-lobbyist Frank Moores, two of the principals in the Mounties' ongoing investigation into allegations of corruption in the 1988 sale of Airbus jetliners to Air Canada. (Schreiber later alleged that Scott revealed information only

available from an RCMP wiretap.) “It was remarkably indiscreet for a solicitor general,” Proctor told Maclean’s. “He seemed cocky and full of bravado.” Not by week’s end. Day after day, the Opposition hammered away, calling for his resignation on the grounds that he had prejudged both the APEC inquiry and the Airbus investigation, although Proctor conceded that he never heard the word Airbus. Scott, a short, plump 43-year-old, faltered badly under fire. The irony is that he grew up immersed in partisan politics as part of a staunchly Grit household in Barker’s Point, near Fredericton. And, even before he came to Ottawa in 1993, most of his working life had been spent around the Liberal party, including a stint as a senior policy adviser to former New Brunswick premier Frank McKenna. “Andy is a tremendously competent individual,” declared his old boss McKenna, now practising law in Moncton. “I do not know anyone in politics who is more honest or sincere.” Yet even his admirers suspect that he might still be starry-eyed enough about finding himself in the big leagues to brag to an old acquaintance about such matters as his “standing offer,” as Proctor’s notes have it, to become an ambassador to the United Nations.

Twitching nervously in the Commons, Scott first denied Proctor’s allegations outright, claiming "none of it is true.” Talking to reporters later, he was more vague, saying he could not remember who sat beside him, even whether it was a man or a woman, or what they spoke of. Then, a day later, Scott regained his memory—and identified his seatmate as an acquaintance of 15 years, New Brunswick lawyer and longtime Liberal supporter Frederick Toole. In a carefully worded note to Scott, Toole admitted they had discussed the APEC inquiry, but denied that the minister had said anything “which I interpreted" as compromising it. loiter, though, Toole refused to say Proctor had made up his story.

The Liberals desperately argued that Proctor’s ethics were the issue, comparing the Saskatchewan MP to the now-infamous Linda Tripp, who secretly taped Monica Lewinsky. Proctor, though, maintains his conscience is clean. “I would have never worn a wire or used a cell-phone conversation to trap the solicitor general,” he said. “But this occurred in a public place. We thought about it for a long time and decided that what he had said was of more importance than how the information was obtained.”

It was, moreover, political dynamite. With Scott wilting under the onslaught, Chrétien came to his aid repeatedly during Question Period, a sure sign that his cabinet post is safe, at least for now. Liberal insiders say the Prime Minister has strong political reasons for standing by his man: Scott is the ranking minister from Atlantic Canada and the only one from New Brunswick, where the Liberals have just three MPs. And convention has always dictated that each province have a seat at the cabinet table. “With Scott gone the pickings in New Brunswick are very slim,” concedes one adviser to the Prime Minister. In truth, Scott would likely still be mouldering in the Grit backbenches had former defence minister Doug Young not lost his New Brunswick seat in the last election. Now, even in his home province, there are questions about his ability to perform in such a demanding post as solicitor general. “He knows he is lucky to be in cabinet," said one Fredericton Liberal who has known Scott for years but asked not to be identified. “If he bounces back maybe he can prove all those doubters wrong.” But last week that looked like a very big if. 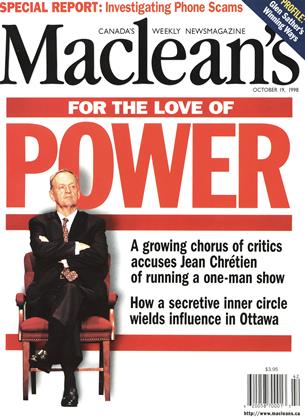