A battle to prevent more evil

Snow dusted the crests of the Cursed Mountains last week, the first harbinger of the coming winter in the rugged borderlands between Albania and Serbia’s southern province of Kosovo. A sure sign, as well, that time is fast running out for the hordes of ethnic Albanian Kosovans still encamped in the Kosovan wilderness.

There may be as many as 50,000 refugees, chased from their homes by Serbian forces. And despite international agreements signed last week in Belgrade and faraway Brussels, few seem ready yet to abandon the hideouts and makeshift shelters they have constructed in wooded hills, far from the Serbian troops who put the torch to their villages.

“We’ve been on the move for months,” acknowledged one matriarch last week as she, wrapped in a scarf against a chill October wind, hurried her clan of women and children along a forest track in the shadow of western Kosovo’s aptly named range of snowtopped mountains. “And right now, all we are looking for is someplace to sleep.”

Not far away, in the devastated village of Jablanica, a Kosovo Liberation Army unit, clad in camouflage fatigues emblazoned with the KLA’s black doubleheaded eagle, huddled in the burned-out shell of what was once somebody’s home. The guerrillas, who are fighting for Kosovan independence from Serbia, do not expect much to emerge from the deal negotiated at the eleventh hour last week between UN envoy Richard Holbrooke and Yugoslav President Slobodan Milosevic. “Frankly, we have little hope,” said the local KLA commander, speaking in French, cradling a long-barrelled rifle. ‘We don’t believe the war is over.” He said a 2,000-member contingent of unarmed international monitors, as planned under the new agreement, would not have the muscle to force out either the Serbian military troops or the notorious blue-uniformed special police units largely responsible for terrorizing the local population. Even worse, he said, the deal was certain to be scuttled at some point by Milosevic. “He’s lied so many times before,” added another guerrilla, this time in German.

Given the Yugoslav president’s appalling track record, there was ample cause for misgivings about the deal the hard-nosed Holbrooke finally forced Milosevic to swallow. It may have averted action by an airborne NATO armada—including six Canadian

Forces CF-18 fighter-bombers—but serious doubts remain about the agreement’s capacity to bring lasting peace to Kosovo. The accord calls upon the 55-nation Organization for Security and Cooperation in Europe to field some 2,000 civilian “verifiers” on the ground in Kosovo—backed in the air by noncombat reconnaissance planes—to oversee the withdrawal of Serbian troops and police, a development that would allow the refugees to return to their homes. Further down the road, the agreement calls for restoration of Kosovan autonomy within the Yugoslav federation, elections to create new local government authorities and, after a three-year “cooling-off” period, talks about the long-term political future of the territory. Pre sumably, they would not rule out the possibility of Kosovan independence.

Still, few expect an early resolution to the conflict that, since it began in earnest last March, has cost close to 1,500 lives and left another 200,000 people homeless. Polish Foreign Minister Bronislaw Geremek, currently OSCE chairman, admitted as much late last week as he flew to Belgrade to sign the formal agreements establishing the force of 2,000 civilian monitors. “Maybe it doesn’t look like the best solution,” said Geremek, “but certainly it is the least evil outcome.”

Will Serbia make good on its agreement to pull out of Kosovo?

NATO’s civilian and military commanders echoed that guarded view as they followed Geremek to the Serbian capital to initial accords permitting NATO overflights. The Western military alliance’s secretary general, Javier Solana of Spain, pointedly told Milosevic that he was “far from meeting” the international community’s demands on Kosovo. “The solution to the problem,” said Solana, “is not signing papers but complying with agreements that have been achieved.” In support of that tough approach, NATO maintained its big stick: the threat of air strikes against Serbian targets if Yugoslavian forces do not show incontrovertible evidence that they are leaving Kosovo. But late last week, NATO extended its deadline for Serbian compliance with the agreement by 10 days, until Oct. 27. In Brussels, NATO officials said at week’s end that they were seeing no evidence of “genuine, substantive” troop withdrawals. On the contrary, the alliance’s intelligence officers leaked reports that they could identify by name and number the Yugoslav army and police units that should have been withdrawing under the terms of the agreement but had not yet moved.

Certainly in Kosovo last week there were few signs of substantial troop movements in any direction. On the main road through the central region of the territory, most vehicles were carrying police, army, foreign reporters or an occasional aid delivery. Between police checkpoints the only signs of life were blue uniforms hanging out to dry, soldiers felling trees for firewood, cattle and pigs roaming aimlessly. Rotting carcasses of cattle and horses littered the roadside.

In the western village of Dolovo, one of the first settlements to be torched when Belgrade launched its offensive last summer, about 20 police still occupied houses and manned two checkpoints. The few Serbian families that lived there were back in their homes, but no one else. Strangely, a fancy pink satin dress with sequins had been draped around a tree trunk. Behind it were the ruins of another gutted farmhouse. On the doors of fire-blackened homes police had daubed four Cyrillic letters that stand for the nationalist motto “Only unity saves the Serbs.”

Milosevic, he hastened to add, had more good points than bad.

In Bica, there were never more than a few ethnic Albanian families. Three of their houses lay in ruins. Local police claimed they had been destroyed because “terrorists” had been using them as a base. But not far away, in the village of Ostrozub, where the majority of the population is Albanian, the view was different. Bajram Morina, a sociologist, lauded NATO for bringing to an end Milosevic’s campaign of terror against the Albanians. He even confessed that, initially, he would have enjoyed witnessing the sight of NATO warplanes bombing the Serbs. “I wanted it to happen,” he admitted, “but then I thought deeply and I hoped it wouldn’t. It would have led to another cycle of violence—and for what?”

Farther west, on the other side of two rivers, Jablanica, once a KLA stronghold, was all but deserted save for the KLA band and a few local farmers. One of the farmers dragged visitors into the gutted remains of his house. Nothing had remained intact. The roof was gone.

“How can I bring my family back?” he demanded. “I have nothing except the clothes I stand in.” Others in the village claimed they still hear gunfire at night.

“At the sound of the first shot, the women and children run back into the forests,” said one man, cradling an antique hunting rifle. A young woman, armed and in rebel uniform, strode by as he talked, giving a clenched-fist salute. No aid convoy has reached Jablanica for more than a month. The few villagers still there were in a state of near desperation, forced to survive on potatoes, corn and red peppers.

The mood was more upbeat, however, 25 km north in the mostly Serb-populated village of Bica. “The main thing is to have peace here and live normally,” said Momcilo Andrijasevic, a police reservist. The occasional gunshot, described by Andrijasevic as “KLA warnings,” rang out as he talked. He maintained that local Serbian villagers, residents of Bica for generations, were willing to accept a U.S.-mediated peace deal that would give substantial autonomy, but not independence, to Kosovo. “It doesn’t matter if an Albanian or Serb is head of Kosovo,” he argued, “so long as we live in peace and freedom.”

Vojo Doncic, the village deputy mayor, was relieved that he no longer had to do 12-hour shifts in the trenches that ring Bica. But he was depressed about how things have turned out in the decade that has elapsed since Milosevic first stripped Kosovo of its provincial autonomy, the move that fuelled his rise to power on the back of Serb nationalism but also led to the breakup of former Yugoslavia. ‘These last 10 years weren’t good for the Serbs or Albanians,” admitted Doncic. “It was the people who suffered.” But

There is no easy answer to that question. For the moment, it appeared that the mere threat of NATO air strikes had brought a measure of relief to Kosovo’s warweary inhabitants. “We’ve begun a process in which the international community can act together to stop the bloodshed and avoid humanitarian disaster,” maintained Polish Foreign Minister Geremek. “We can also begin a process from which a political solution to the Kosovo crisis can be found.”

But no matter what eventually happens in Kosovo, NATO crossed a line last week when all 16 member states of the most powerful military alliance in the world agreed to launch joint military action against Yugoslavia, a sovereign European state with internationally recognized borders. Only three of the organization’s members did not contribute aircraft to the project. Neither Iceland nor Luxembourg possesses warplanes. Greece, a Serbian ally uneasy about the pervasive Albanian presence on its northern border, declined to send jet fighters or bombers but did consent to the use of Greek airfields in the case of conflict.

For the first time in NATO’s 49-year history, the alliance chose to intervene with force in what, technically at least, is an internal Yugoslav concern. The implications of the decision are likely to be far-reaching, particularly for all of those nation states harboring within their borders restive minorities yearning for independence. Canada falls into that category, even if the state of its relations with Quebec bears no comparison to the hostilities between Yugoslavia and Kosovo. Still, the precedent of military intervention has been set, and a NATO attack on Serbia remained a distinct possibility. 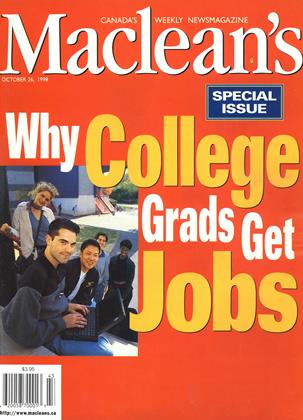