Are Quebecers ready for the Liberal platform?

When Quebec Liberal Leader Jean Charest recently announced his party’s economic platform, Quebec pundits cheered at the prospect of an ideological debate during the election campaign. By suggesting turning the page on the Quiet Revolution, Charest boldly waded into delicate territory. A vaunted era of reform that modernized the province in the 1960s, the Quiet Revolution ushered in a large role for the state that has helped define Quebec society. For Charest’s Liberals, that costly omnipresence has largely served its purpose. They now argue that Quebec needs less government and modest tax cuts to kick start the province’s lagging economy. Although pundits immediately called it a risky proposition, they also hailed the fact that Quebecers will face distinct choices on Nov. 30. “If we look at the platforms themselves, the differences are very significant,” says Alain Gagnon, the head of McGill University’s Quebec studies program.

The Parti Québécois paints itself as the defender of the Quiet Revolution and its heritage. It positions itself as a compassionate, trustworthy government forced to make difficult costcutting decisions—but committed to its social democratic roots. And whether Quebecers will buy into the Liberals’ platform, with its more laissez-faire economic approach, is one of the big question marks looming over the campaign. Or will voters ultimately be swayed by other factors, such as sovereignty? So far, Quebecers clearly are not sold on the Liberals: following a lacklustre campaign debut, the party remains stuck in neutral, according to two polls published at week’s end. Léger & Léger shows the Liberals inching ahead of the PQ by a margin of 47.9 per cent to 46.9 per cent; CROP shows the lead in reverse, giving the Liberals 45-per-cent support compared to the PQ’s 46

per cent. But the polls give Premier Lucien Bouchard’s PQ an 18to 20-point lead among francophone voters, a situation that spells trouble for Liberal fortunes because francophones form a large majority in all but about 55 of Quebec’s 125 ridings. “There aren’t a lot of favorable indicators for the Liberals,” acknowledges Claude Gauthier, vice-president of CROP Inc., noting that the party should be pulling in more support from women and younger voters (party sources acknowledge that they are targeting 25to 35-year-olds). “There is something in their message and strategy that isn’t working,” he says.

The Liberals have softened their economic message since the PQ launched a volley of attacks painting the platform as a radical rightwing, made-in-Ontario approach. In fact, even though the Liberals acknowledge that their economic policies need explaining, Charest has spent much of the early campaign talking about other issues, such as the need to shore up the province’s ailing health care system (in that, he was undercut last week by Bouchard’s promise to inject fresh funds into health care). If elected, the Liberals promise to shrink the size of government, possibly through early retirement. They also plan to cut corporate and personal income taxes, rejig the province’s labor laws and encourage business partnerships for infrastructure projects.

But one of the problems in selling the plan, according to some observers, is that Quebecers don’t view the state as a problem. In fact, many seem to accept greater state intervention as the necessary price to protect themselves as a minority in North America. “The state is still seen like the savior of the people,” contends Richard Martineau, 37, the editor of Voir, an alternative Montreal weekly tabloid with a young readership. “Quebecers are very much attached to this idea of having a big government.”

The Parti Québécois subscribes to that notion. Publicly, some Péquistes express delight with the Liberal proposals. “We don’t believe people will buy it,” says Claude Lachance, the PQ MNAfor the swing riding of Bellechasse, south of Quebec City. ‘We believe that Quebec is different and what the Liberals propose doesn’t fit with the

Quebec of the last quarter century.” Although the PQ defined its four years in office by slashing the province’s deficit, the Bouchard government keeps reminding voters about the popular $5-a-day day care program it created in September, 1997. Last week, in a campaign stop at one day care centre, Bouchard promised to maintain the daily fee for the duration of another PQ mandate. The PQ also plans to help create jobs by ploughing $2 billion into a provincial economic development agency over the next five years. (The Liberals would use the money for tax cuts.)

Some observers believe Quebecers are open to the Liberals’ economic ideas but need to be sold on them. Although party officials maintain their economic platform was not drawn up with one specific age group in mind, many of their promises target young families. In particular, Liberals acknowledge they hope to win over 25to 35-year-old voters, and say their polling shows that age group is more receptive to their ideas (unlike 18to 24year-olds, who largely support the PQ). Liberals believe these voters are less

fervent about sovereignty and more concerned about the insecure job market and high taxes. And in an effort to capitalize on the 40-year-old Charest’s relative youthfulness and the graying PQ caucus, the party is fielding a number of young candidates including Jonathan Sauvé, 23, former head of the the party’s youth wing. “Charest is much more able to reflect the

concerns of that generation because they, too, like him, have grown up since the Quiet Revolution,” says Christos Sirros, a Montreal Liberal MNA “There’s another mind-set there.”

For the Liberals that means wooing voters like Stephen Amnotte. The soft-spoken 31-year-old francophone thinks the state meddles too much in areas where it doesn’t belong. As for the Quiet Revolution, Amnotte says: “I was only a child. I don’t really have an idea of what it was like before.” A self-employed translator who works out of his Montreal duplex, Amnotte voted in 1994 for the Action Démocratique du Québec, the party founded by the former head of the Liberals’ youth wing, Mario Dumont, and for the PQ in 1989. But this time out, he hasn’t made up his mind. Angry over the PQ’s health and social services cutbacks, Amnotte is also put off by the prospect of another referendum. He finds the Liberals’ promise to create an incomeinsurance plan for self-employed workers “interesting,” but he is skeptical about their ability to deliver on promises such as tax cuts. “If I vote Liberal,” says Amnotte, “it will be mostly not to have a referendum.” For many voters, however, growing older doesn’t mean switching allegiances. “It’s true that the younger you are, the more you think about sovereignty,” says Stéphane Dodier, 31, the owner of a Montreal computer consulting firm, which employs about 30 people. “That disappears a bit as you get older because you think a little bit more about stability.” Still, Dodier says he’ll probably vote PQ again largely because he believes the party can better defend Quebecers’ interests in Ottawa. Last week, Bouchard leapt back into that arena by suggesting the PQ would seek a constitutional amendment allowing provinces to opt out of federally funded social programs with compensation. Bouchard insisted that such a move, in the unlikely event that it happened, would only be an “interim measure” before sovereignty. Voters like Dodier list other reasons for voting PQ. Citing the Bouchard government’s record on cutting the deficit, Dodier says: “I think they are doing a very good job.”

That is a prevailing sentiment among many Quebec voters. Recent

opinion polls show a high level of satisfaction with the Bouchard government. The CROP poll, taken between Oct. 30 and Nov. 4, gives the PQ the lead among men and voters under 55; the Liberals have a twopoint lead among women and the over-55 age group. Bouchard also leads Charest in personal popularity among younger voters. For some Quebecers, the Liberal leader remains an unknown quantity, according to Gauthier. ‘There are a lot of people who tell us that they can’t offer an opinion on Mr. Charest,” he says.

Three Liberal supporters at a trendy Montreal bar on St-Laurent Boulevard did not share that reticence one evening last week. The francophone men in their 30s expressed concern about Charest’s campaign performance. He needs to show more emotion, be more aggressive in his speeches and get closer to Quebec voters, they said.

‘We see Bouchard shaking hands with people and we see Charest beside a blue backdrop,” says Claude, 37, a Montreal businessman who didn’t want his last name published.

The fight for Quebec focuses on about 30 ridings, most of them located between Montreal and Quebec City. In 1994, candidates won 24 of those ridings by less than 1,500-vote majorities. (The PQ took 18 compared with six for the Liberals.) One of them is Vimont, an affluent riding in Laval that PQ tourism minister David Cliche took by a mere 128 votes in the last election. On one commercial street plastered with Cliche campaign posters last week, several residents raised health care as a top priority, while a few appeared skeptical about the Liberals’ promise of tax cuts. “That’s good—but will they really do it?” said 60-year-old Laurent Tétreault. “Money doesn’t fall from the heavens.”

In fact, tax cuts do not seem to be at the top of Quebecers’ wish list. A recent poll published in The Gazette listed health care and then the economy as voters’ primary concerns, while only 13.1 per cent considered tax cuts a priority. Christian Bourque, a senior research director at the Angus Reid Group Inc. in Montreal, suggests a parallel with the rest of Canada, where tax cuts were not a pressing concern before the federal government reached a budget surplus. “In Quebec, we still have a deficit,” says Bourque. “There is a possibility that people are not yet on the same page as Mr. Charest.”

The PQ isn’t taking any chances. The party announced its own $3.2 billion in tax cuts at the start of the campaign—two weeks after Finance Minister Bernard Landry scolded Charest for being irresponsible with his tax cut promises. The PQ also

moved last week to blunt the edges of voter discontent on health care and perhaps steal more of the Liberals’ thunder. With polls showing health care as an Achilles heel for the PQ following steep budget cuts, the party announced it will reinject $2.1 billion into the system if it wins another mandate. Those announcements prompted Charest to declare: “It’s very much a ‘me too’ campaign, whether it’s on health care or tax cuts. They’re going to have a real credibility problem in terms of the choices they’re presenting to Quebecers.”

So far, the predicted clash over the different economic visions had yet to flare up in the surprisingly ho-hum early days of the election campaign. But that may well happen during the televised leaders’ debate scheduled for Nov. 17. Unless, of course, Quebec’s other ideological debate—over sovereignty—emerges to dominate the exchanges. □ 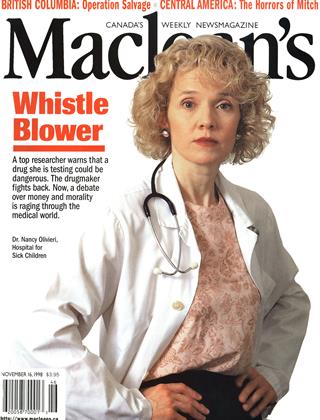