When Steve Case and his colleagues at Q-Link threw the switch on Nov. 1, 1985, they were bitterly disappointed. They were setting up the first-ever online link for owners of Commodore computers from Q-Link’s offices near Washington. But when only 24 users signed on, many thought the idea of connecting computers across a network was doomed to fail. Case, however, was undeterred. Soon after, he changed the company’s name to America Online and launched an advertising blitzkrieg. By 1993, AOL was so successful that Microsoft Corp. co-founder Bill Gates tried to buy part of the firm. Case refused, and over the next five years built the company into an online powerhouse.

Last week, it was Case who had Gates in the crosshairs. AOL has agreed to pay $6.3 billion for California-based Netscape Communications Corp., a company best known for its consumer and corporate Internet software but which also has one of the Internet’s top destinations in its Netcenter Web site. AOL will now compete directly with Microsoft in the business of supplying Internet software and will continue its rivalry from an even stronger base with Microsoft’s MSN online service. In short,

AOL has taken a a commanding position in the digital world. ‘To be able to deliver our service anywhere is a key part of what this deal is all about,” said Case, AOL’s president and CEO.

As the Internet opens the door to an explosion of electronic commerce, the payoff for Dulles, Va.-based AOL could be staggering. E-commerce in North America is expected to generate revenues of more than $495 billion by 2002, with online advertising alone amounting to $75 billion, says Forrester Research Inc. of Cambridge, Mass. This year, companies are expected to spend nearly $9 billion setting up shop on the Net.

The takeover brings to an end the existence of California-based Netscape as an Internet pioneer that moved the Web browser—allowing people to view Web sites on their computers—into the mainstream. When the company went public in 1995, its share price rocketed to over $100. But a year later, its stock floundered when Microsoft launched a competing browser that it gave away. Netscape has since rebuilt itself into a leading supplier of software and support services for businesses.

Another attraction for AOL was Netscape’s Netcenter Web site, a major por-

tal, or access point, for consumers and businesses using the Web. By marrying AOL’s 14 million users to Netscape’s 16 million corporate customers, AOL will have access to 70 per cent of all businesses using the Net and 59 per cent of the home audience. With AOL’s revenues growing by 50 per cent annually to a projected $1 billion this year, analysts say the combined deal will allow it to grow even more rapidly. “This deal,” said Frederick Moran, an analyst at New York City-based ING Baring, “ensures AOL’s dominance on the Internet.”

The consolidation of AOL’s power online could trigger takeovers among companies operating competing Internet portals, which are £ becoming the dominant Web destiti nations. Yahoo! Inc., the most pop| ular site, will likely weather any I challenge but smaller portals like “ Excite! Inc. may join forces with £ entertainment and media companies. “This is a high-stakes game,” says Graham Duffy, president of Toronto-based Canoe LP, an online service. ‘We’re going to see consolidation continue.”

In the future, AOL’s toughest fight may still be with Microsoft, which dominates in the computer software sector and operates its own network of advertising-supported online services. AOL has a built-in advantage because it is able to charge a monthly fee for its service as well as collecting advertising revenues. But Microsoft boasts its own strengths. About 90 per cent of the world’s computers use its Windows operating system, which gives it control over the appearance of the desktop, or opening screen, on millions of computers. AOL had previously agreed to use Microsoft’s browser in return for space on Windows desktops and, as an illustration of Microsoft’s clout, will continue to let its customers use the Microsoft browser.

The deal also complicates a U.S. antitrust case against Microsoft that was based largely on its fight with Netscape. Microsoft’s lawyers have now asked to have the case dismissed. But Forrester analyst Bob Chatham says Netscape was vulnerable to takeover because it was hurt so badly in the browser war with Microsoft. Bill Gates, meanwhile, now has one less competitor in Netscape—but gained a much more powerful threat in AOL. And Steve Case’s conviction that computer networks might actually amount to something has paid off once again. 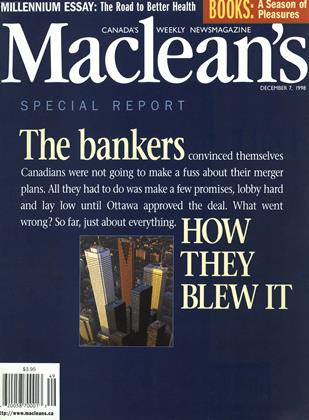