Stojko faces crushing pressure in his quest for Nagano gold

At first, Elvis Stojko doesn’t remember. He has just changed into his natty red-and-white sweats after a morning workout at Nagano’s stunning White Ring arena, and the question—about something that happened a decade before—catches him off guard. Slowly, though, the light goes on, and details flood back into his memory. In early 1988, when he was a promising skater of only 15, he attended two of Brian Boitano’s practice sessions with choreographer Sandra Bezie in Toronto. The American was cramming for his Olympic confrontation with Canada’s Brian Orser in Calgary and was understandably remote, focused on converting Bezic’s suggestions into winning form. Sitting quietly at rinkside, Stojko was just as intent, soaking up the atmosphere around someone reaching for skat-

ing’s ultimate prize. Last week, overlooking the ice surface on which he could make his own Olympic history, Stojko smiled. “Now that I think about it,” he says, “I am doing exactly the same stuff Brian was doing back then—the way he worked on his jumps, his spins, that sort of thing. Funny, eh?”

The comparisons do not end there. Like Boitano then, the Richmond Hill, Ont., native is facing the fight of his life this week, a battle to decide who gets the men’s Olympic gold medal and the riches that go with it. At least four skaters have clear shots at the top spot on the podium—in addition to Stojko, the favorites include American Todd Eldredge and two Russians, Ilia Kulik and Alexei Yagudin. And there are bound to be surprises: few knew Alexei Urmanov’s name before the Russian won in 1994. But as the reigning world champion going into Nagano, Stojko gets the lion's share of attention. “Elvis has the most pressure, no question,” says Bezie, in Nagano as part of the CBC broadcast team. “Kulik can win—he’s good enough— but if he doesn’t, he can wait four more years for another shot. It’s not his time. It’s Elvis’s time, and he knows it.”

No Canadian has won the men’s Olympic title

Of course, all of Canada’s 154 athletes were feeling some of that pressure as they tried to give the performance of their lives with the whole world watching (page 54). But figure skaters, especially in the glamorous solo events, were the most watched of all. And Elvis carried the heavy load of expectations that, so far, did not seem to be weighing him down. At 25, he is skating in his third Winter Games—he finished seventh in 1992 in France, and won silver two years later in Norway. He remembers the intensity of those competitions, saw how the favorites struggled, watched closely as cooler heads prevailed. Now, his best weapon is not his quad-triple combination jump—it is his head, his strength of mind.

How hot is the Olympic cauldron? Boitano says the % showdown with Orser in Calgary took 10 years off his life, and he won. Stojko learned from that. He knows that | when he takes to the ice to skate his exhausting short g program on Thursday, his heart will be beating madly from anticipation. So he has focused his pre-Olympic at¡ I tention not on beating Kulik and Eldredge, but on achiev-1 o! ing a mind-set that enables him to perform under that § crushing pressure. In sports-speak, it’s called The Zone.

The Zone alone will not be enough—winning still comes down to what happens on the ice. But both play to Stojko’s strengths. He is remarkably self-possessed, and he keeps a simple approach to the sport: he practises endlessly because repetition builds confidence; he never tries to be the classical, Russian-style skater he is not; and he pushes his limits, adding new jumps and combinations because the effort keeps him interested. “Who wants to go through life in neutral?” he says.

He will need an extra gear in Nagano. There may not be a catchy name for this week’s skating showdown, but the high-flyers assembled at the White Ring promise even more fireworks than the Battle of the Brians. American star Scott Hamilton, who edged Orser for gold in Sarajevo in 1984, is taking a break from professional skating to provide analysis for the CBS in Nagano. From the broadcast booth, he scans the ice below as the elegant Kulik rehearses his short program. “This is the deepest, most athletic field in history,” Hamilton says. ‘You can’t predict what will happen because so many of these guys could win.”

The rewards for victory are huge. Individual figure-skating titles are among the most prestigious at any Winter Olympics, and marketing experts estimate that because skating has become such a hot TV commodity in North America, a gold medal would be worth at least $10 million in endorsements and appearance fees to the winner of the men’s final on Saturday. Stojko and teammate Jeffrey Langdon of Smith’s Falls, Ont, have an additional incentive— no Canadian has ever captured the men’s Olympic skating title. Stojko had that in mind when he first arrived at the White Ring last week. He looked out at the Olympic logo at centre ice and told his coach, Doug Leigh: “See those rings? That is what I’ve been working for.”

In the quiet week before the competitions began, Elvis could be found in the lower concourses or at rinkside, wearing a Walkman and listening to Van Halen or Def Leppard. He often uses his martial arts routines to warm up, which alarmed some members of the White Ring’s volunteer security staff until it was explained to them who the curly-haired kicker was. After his workouts, safely away from autograph hounds, he could sit in the broadcast booth, chatting with other skaters or banging away on his laptop—he is keeping a journal of his Olympic experience. “I’ve never written a journal before,” he says. “For some reason, I thought it was important this time, to record what happened each day, my thoughts, what happened at practice.”

But as the competition neared, so did the demands. The Canadian skating team held a news conference last week on a day when hundreds of reporters and photographers were running loose in the city with no events to cover. Stojko was besieged—the scrum of reporters was eight deep—but he stayed cool. “It really wasn’t as bad as it looked,” he insisted the next day at the rink. That was the last formal interview before the competition begins. Elvis spent subsequent off-ice time playing video games at the arcade in the athlete village, hanging out with other athletes or with friend Kellie Snyder, a production assistant with the U.S. cable network TBS—he insists they are not dating.

His personal team in Nagano includes Leigh, choreographer Uschi Keszler and his mother, Irene Stojko. “They have always been pretty relaxed,” Stojko says, “and that’s important. They are the people who affect how I feel.” They could hardly be more different. Leigh is a no-nonsense guy who uses clipped, militaristic phrases in his instructions to Stojko. “Never lose sight of the target,” he often says, “because if you do, you’ll never hit the bull’s eye.” Keszler, conversely, is more expansive. “Elvis is balanced,” she says when asked about Stojko’s chances, “between creative thinking and analytical thinking. He has no conflict between the two—in fact, true creativity demands both. All great artists must also be great technicians.”

His mother, a native Hungarian, is staying with a local family that collects Japanese antiques. “It is the most beautiful place,” she says. “I am so excited to learn about their culture.” As a girl, she was a promis-

ing dancer in Szolnok, near Budapest, but her mother never let her pursue that career. With Elvis, the youngest of her three kids, Irene is making amends. She watches nearly every practice, following his movements with a camcorder so that he can review the tapes at night She sews his skating outfits and keeps house for him—he has an apartment in the family home—and by all accounts, she makes a mean goulash. While his dad, Steven, has stayed behind in Richmond Hill to manage a landscaping and snow-removal business, Irene travels the world. In the division of parental genes, how much of his personality comes from her? “A lot,” she says proudly. “Maybe all of it.”

What will it take to win?

Bezie says Stojko’s short program, set to Japanese taiko drums, “is his best yet—it covers all the « bases and it should leave him in g good shape going into the free I skate.” In international competi| tions, Elvis has received lower g marks for his long program than £ some of his European rivals have for theirs. But the way Bezie sees it, Saturday’s free skate—at 5 a.m. (EST) on Feb. 14—is basically a jumping contest “Once you get the quad and the eight triples in, and you do the four required spins and the footwork, there’s not much time to do anything else but breathe,” she says. “So whoever skates clean will win.”

That certainly favors Stojko. In the same way that sprinter Donovan Bailey is a big-race performer, Stojko is renowned, even among his rivals, for his consistency. No one in the sport has skated more clean programs, and none can match the technical difficulty of his jumps. Then there is his strength. In his free skate at the 1995 Worlds in Birmingham, England, barely recovered from an ankle injury yet knowing he needed something extra to have any chance of winning, Stojko captured his second world title by adding a triple-triple combination jump. What made the ad-lib most astounding was that he did it at the end of his four-minute program. “No one has the ammunition that he does,” says Leigh.

They are getting close. The Russians have added quadruple toe loops to their programs and a few are attempting Stojko’s trademark quad-triple combination. And Kulik, a 20-year-old from Moscow, has all the jumps as well as the classically trained grace that so many judges prefer. The knock on him is that he is inconsistent—unlike Stojko, he hates training. ‘You watch Kulik practise and you think, There’s no way the kid can win,’ ” says former Canadian pairs champion Paul Martini, another member of CBC’s Nagano crew. “But when it’s showtime, he’s a different skater.”

Can Stojko—or anyone else for that matter—handle the heat? Leigh has too much Olympic experience to venture a prediction of what might happen. He was Orser’s coach and came so close in 1984 and 1988, only to finish second both times. “It all came down to a splinter of a difference,” he says, “and we had to live with that” But Stojko, he says, is thoroughly prepared, and the skater’s experience should count for something. “The things that got him this far will help him out there,” he says, nodding towards the ice. Elvis himself seems amazingly calm in the face of the storm. “It’s a pressure situation, but that’s the challenge,” says the man in the spotlight. ‘You either meet that challenge, or you don’t.” □ 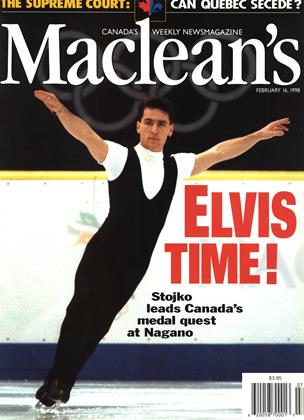