The 27th annual Juno Awards will once again flag Canada’s top-of-the-pops status. Shania Twain and Sarah McLachlan—part of this country’s titanic female quartet, along with Céline Dion and Alanis Morissette—are headliners at the March 22 event at Vancouver’s GM Place. And when Our Lady Peace takes the stage, the band will be a reminder that the boys, too, are making their mark. Meanwhile, a fresh wave of diverse Canadian talent, both male and female, is coming up fast behind them. Some bright new faces up for Juno prizes:

Outlaw is a term often bandied about in country music to refer to an artist who bucks Nashville trends. In the case of 34year-old Julian Austin, the word has a more conventional meaning. The rising country star and native of Sussex, N.B., has had more than his share of trouble with the law.

In 1983, he served eight months for breakand-entry and possession of stolen goods.

Then, in 1991, while working as a bouncer in a Saint John biker bar, Austin was convicted again, this time for cocaine trafficking. And that wasn’t the half of it. “If they had caught me for all the stuff I did, I probably still wouldn’t be out,” laughs Austin, who says he has conquered the drug addiction that got him into trouble. “I was lost, confused and empty inside,” adds the onetime rock ’n’ roller. “I wanted to understand things again and fill myself up with something good. Country music did that for me. It became a form of therapy in itself.”

With his trademark black Stetson, goatee and weightlifter physique, Austin has taken the Canadian country scene by the horns. His debut album, What My Heart Already Knows, features autobiographical numbers like Honky Tonk Lock and Key, about his time in prison, and puts some much-needed twang back in country music. The album has now sold 50,000 copies in Canada and has won Austin a Juno nomination for country male vocalist of the year. “There’s not enough attitude in what they call ‘new country’ these days,” declares Austin. “They’ve been trying to make it too pretty and too perfect. They need to put some grit back in it.” Spoken like a true outlaw.

The four-year-old Saskatoon band Wide Mouth Mason has paid its dues in a particularly tough environment—the small towns of the Prairies. And the fact that two of its three musicians belong to visible minorities made things especially difficult.

Bassist Earl Pereira, 23, is from a Filipino family, and drummer Safwan Javed, 23, is of Pakistani descent (the trio is rounded out by guitarist Shaun Verreault,

24). Frequently subjected to racist taunts, the group learned how to duck insults and beer bottles during performances. Still, it tried to win over even the most redneck audiences. “We’d play everything from Nirvana to whatever the big guy in the Harley-Davidson jacket told us to play,” laughs Verreault. “I’d walk into a place,” Javed recalls,“and go,‘Oh, no, there’s a dude in a cowboy hat—I’d better hide.The next thing I know, he’d be slapping me on the back, saying,‘You guys are cookin’, brother.’ ”

Signed to Warner in Canada and Atlantic in the United States, and up for the best new group Juno, the blues-rock trio is now winning over big-city audiences. Looking out of his Toronto hotel room at the expanse of the SkyDome, where the band opens for The Rolling Stones on April 26, Verreault is a bit awestruck at how far they’ve come.“It sure is a lot bigger than Safwan’s basement in Saskatoon.”

“'T'his is my yeast infection song,” Holly J. McNarland says to a cheering audience of 450 packed into Toronto’s Reverb club earlier this month. With that, the 24year-old native of The Pas, Man., launches into The Box, three minutes of spleenventing fury that has placed the singer in the forefront of post-Alanis Canadian pop. Boasting a best-selling debut album, Stuff and three Juno nominations (best new solo artist, best alternative album, and best video), McNarland has made a name for herself by singing songs with an astonishing frankness. The one that helped jump-start her career was a number castigating a poor lover called Mr. 5 Minutes. One of three children born to a Métis woman and her Irish husband, McNarland credits her mother with helping her to find the powerful singing voice that emanates from her petite, tattooed frame. “When I was a child, she’d get out her guitar and we’d sing country songs,” recalls McNarland, chewing on her bejewelled lower lip. “But I was really quiet, really meek, so she’d always bitch at me, saying, ‘Sing louder, I can’t hear you.’ ” McNarland made her debut in a Winnipeg after-hours bar when she was 16, and three years later moved to Vancouver, where her hard-edged pop sound took shape. Now touring with her own three-piece band, the singer admits that she is ready to shift emotional gears. “Anger’s easy to write, but it’s just one part of my personality,” she says. “I’m trying to write more positive songs, but it’s hard. When you’re on Cloud 9, you don’t feel like writing.”

Nobody could accuse Lhasa of taking the easy route to stardom. The Montreal musician insists on singing songs entirely in Spanish at a time when other Quebecbased acts going for a wider audience—even francophone ones— have opted for English. Yet Lhasa’s exotic sound, steeped in melancholic Mexican ballads, has clearly struck a chord. The 25-year-old singer’s debut album, La Llorona, recently went gold in Canada with sales of 50,000 and earned her two Juno nominations, for best global album and best new solo artist Meanwhile, her performances have drawn rave reviews for their intense theatricality. Born in upstate New York to a Mexican father and an American mother, a teacher and photographer respectively, the trilingual Lhasa de Sela grew up in a bohemian environment She and her three sisters spent their childhoods living in both Mexico and the United States, travelling around with their parents in a school bus. While her sisters embarked on careers as circus performers, Lhasa caught the musical bug, making her stage debut at 13 singing Billie Holiday songs.’Tve always really liked sad music,” she admits, “and always wanted to communicate an urgency about life.” Moving to Montreal in 1991 to visit her sisters, who were studying at the National Circus School, she met guitarist Yves Desrosiers, and the two began creating their jazztinged Latin sound. Lhasa credits both Desrosiers and her parents’ tastes—especially her mother’s love of operatic and theatrical songs—with influencing her music. But she makes no apologies for the Spanish. “It’s all about using whatever instruments are at your disposal,” she says, “and language is just another instrument for a singer”

James Di Salvio began the experimentation that spawned his hot new band as a teenager doing DJ duty at his father’s Montreal nightclub, Di Salvio. “I got to play with the turntables during the day, contrasting different sounds at once,” explains the 29-year-old founder of Bran Van 3000, which has caused a buzz with its wildly inventive mix of giddy pop vocals, hip-hop grooves and snippets from TV commercials and other oddities. The group’s debut album, Glee, released on a small independent label last summer, sparked a bidding war among American majors (the album now has a U.S. release on EMI). Bran Van is now up for the best new group Juno, best alternative album and single of the year—for the hit song Drinking in L.A.

Music is a second career for Di Salvio. Before BV3, he was a successful director who made videos for artists including Sarah McLachlan and U.S. jazz star Branford Marsalis (in his Buckshot LeFonque alter ego). In fact,

Drinking in L.A. is about Di Salvio’s dispiriting attempt to launch a career as a movie director in California. With the nine-member BV3, he sees himself as pulling to« gether talent much the same way | he did in the film business. Di Salvio rapped on a couple of numbers, but g mainly he served as co-ordinator of « the 26 musicians involved in the deo but recording. All of the songs were g written collaboratively. “I basically g just direct now,” Di Salvio says, “so | it’s more like a movie.” 5

I KTAUV It all started with a bunch of kids—up to 11 of them—travelling i I throughout rural Ontario in their parents’ van and performing at agricultural fairs and fiddle competitions. They had learned Celtic tradition from their fiddling-champion father and step-dancing mother, a native of Cape Breton. “We never set out to reach a pop audience,” says Maria Leahy. “We’ve always just played the music that we love, and that we’ve been hearing since we were babies.” But Leahy, the group of nine siblings aged 18 to 32 from Lakefield, Ont, has clearly high-stepped over from traditional Celtic instrumentalists to Canadian pop sensations. The breakthrough began last year, when the group’s self-titled debut album first made the pop charts. Boosted by the popularity of videos for The Call to Dance and ß Minor—not to mention the Celtic revival spurred by shows like

The band recently got back from Europe, where its first album was just released, as it was in the United States. Soon after the Junos, where Leahy is up for best new group, instrumental artists of the year, and best roots and traditional album (group), the ensemble will start recording a new album, and then it tours with The Chieftains for two weeks.“It’s all a bit hectic,” says Maria, 27, Leahy’s guitarist But the former high-school teacher coasts on the fact that she and her siblings have Celtic music and dance in their blood—“This is like bread and water to us.”

With TANYA DAVIES in Toronto 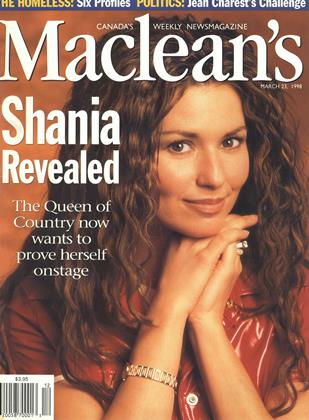