lthough women dancers are a quintessential part of classical ballet, female choreographers are a rarity. Dominique Dumais straddles both roles. The 30-year-old na.tive of Lac-St-Jean, Que., started dancing at the age of 7, and was accepted into the National Ballet School in Toronto when she was 10. “I had no clue what I was getting into,” says Dumais. “But when I saw the professional dancers, I knew that I wanted to make a living out of dancing.” And she has. In 1986, Dumais was hired as a member of the corps de ballet at the National Ballet of Canada. A leg fracture in 1992 forced her to take a year off, during which she realized that traditional ballet was too regimental for her. “I felt like I was battling myself, I was too confined by the corps,” she explains. “I needed to find my own way of exploring other types of dance and movement.” When she returned to the National, Dumais—who was promoted to second soloist—started doing choreography workshops, and discovered that the art form came to her easily. So easily that prima ballerina Karen Kain asked her to choreograph a duet for the Gala des Etoiles in Israel in June, 1996.

“She took a gamble with me,” says Dumais, “which was incredibly daring of her.” The National’s artistic director, James Kudelka, also took a gamble and let Dumais choreograph her first ballet, The Weight of Absence, that the company will perform in Toronto on May 6 and in Ottawa on June 13. “It is very organic, not a straight story line, but not abstract either,” says Dumais. “For me, it is more important for the audience to feel, than to know.” 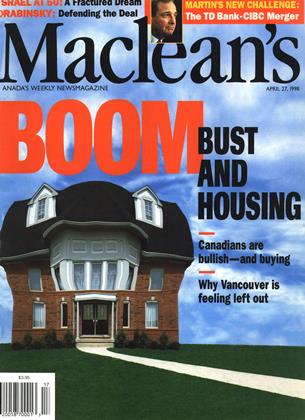