Grabbing the limelight John Bemrose May 4 1998

A Russian philosopher holds a conversation with a solitary eye as big as a beachball. Two argot-spouting teenagers go on a violent pub crawl through an Irish city. A pair of clowns drive an enormous steam engine towards the centre of the earth. These are images from this year’s du Maurier World Stage theatre festival, a 2V2 -week (April 16-May 3) extravaganza featuring the latest in international drama from Britain, Ireland, Latin America,

Lithuania and Canada. During its 12-year history, the biennial Toronto event has become an exciting laboratory for new dramatic ideas, as well as a launching pad for productions— such as Canadian stage phenomenon Robert Lepage’s Tectonic Plates—that went on to take the world by storm.

This year, Quebec City-based Lepage is back with Geometry of Miracles, an ambitious look at American architectural genius Frank Lloyd Wright. The much-anticipated world première, which opened the festival, drew journalists from as far away as Japan, and from such notable papers as The New York Times and Le Monde of Paris. But several other productions shouldered their way into the limelight as well. The Irish were particularly impressive this year, offering a brilliant new staging of Samuel Beckett’s classic Waiting for Godot, while actor Barry McGovern thrilled audiences with a tragicomic monologue based

on Beckett’s novels. From Britain, renowned playwright David Hare dropped by to read from a new work, and a manic group of young string players calling themselves The Gogmagogs drew sell-out crowds with their frenzied fiddling and slapstick humor.

Meanwhile, Canada weighed in with a moving performance by Clare Coulter of Wallace Shawn’s monologue The Fever, and a riveting cabaret performance of Bertolt Brecht songs highlighted by Brent Carver. There were several Canadian world premières as well, including a new black comedy, The End of Civilization, from Toronto’s George F. Walker, and an opera, Elsewhereless, written and directed by film-maker Atom Egoyan (The Sweet Hereafter), with music by Rodney Sharman.

The public has reacted enthusiastically to this cornucopia. Several show have sold out, and the rest have been achieving at least 75 per cent of capacity. Yet from this pinnacle the festival is looking ahead to an uncertain future. With the federal government planning

to legislate against tobacco company sponsorship of cultural and sports events, du Maurier Ltd. has announced that it can no longer support the World Stage. Since it contributes about a third of the $1.6-million budget (with box office making up another third and various governments the rest), this could spell trouble. Currently, there is some talk in Ottawa of phasing in the sponsorship ban or, alternately, of providing interim government support—but the issue is still very much unresolved. “As of now, there will be no World Stage in the year 2000,” insists artistic director Don Shipley. “This is the last remaining international theatre festival in North America, and if they put a bullet in this one, they are killing an event that enriches our community immeasurably.”

The benefits of World Stage to the theatregoing public may be obvious, but the festival’s demise would also, Shipley argues, deprive Canadian artists of a chance to be creatively stimulated by work from abroad—as well as to showcase their talents for foreign producers. “I’m thrilled to say that a Belgian producer was so knocked out by Clare Coulter that he signed her up to appear at a festival there next year,” Shipley says. “Without World Stage this might never have happened.”

If there is a single major disappointment at this year’s festival, it is Geometry of Miracles. In the past, Lepage has counted many successes at the World Stage, including Tectonic Plates (1988) and Needles and Opium (1994). But even his best shows are often uneven—the result of his relentless experimentation and conceptual daring. Two years ago, Elsinore, his one-man take on Shake-

speare’s Hamlet, was plagued by technical glitches, not to mention Lepage’s less-than-stellar delivery of the poetry. Geometry is a far more ambitious show. To simulate its main setting in the Arizona desert (where Wright had a home),

11 tonnes of sand were spread out on the stage. Ten actors portray Wright, his third wife, Olgivanna, and a host of other characters, including Wright’s apprentice architects. At times, the scene switches to Asia and Europe, to dramatize the life of Russian philosopher Gurdjieff—a former mentor of Olgivanna’s, and a reputed influence, through her, on Wright’s designs.

Certainly Geometry—which is scheduled to travel to Expo ’98 in Lisbon in August, and then to Salzburg, Austria, and Paris tains flashes of Lepage’s trademark visual poetry and wit. In one moving scene, the actors cleverly recreate Wright’s revolutionary design for the Johnson Wax building by balancing plates on wine glasses— while a Bach violin concerto echoes the architectural harmonies. And Gurdjieff’s mathematically precise dances are gracefully and hypnotically performed. But Geometry fails to illuminate either Wright’s or Gurdjieff’s ideas, while the connection between the two remains mystifying. And the dialogue in the 314 hour show—spoken by performers who are primarily dancers

and not actors—is so banal that it makes the afternoon soaps sound positively Shakespearean.

Perhaps sensing that he did not have a hit on his hands, Lepage, 41, began to emphasize to reporters during post-première scrums that Geometry was still very much in the formative stages. “The show still needs to be deflowered by its audiences, by actors and critics,” he said. “It’s still crooked and finding its way.” Several commentators implied it might have found a little more of its way during rehearsals, while a visitor from Quebec asked Lepage during one of the Festival’s public interview sessions why he was not premièring his show in his own province—which liberally supports his work with grants. Lepage’s response: ‘Toronto audiences can be critical, but they’re basically very supportive. In Quebec I’m considered something of a menace.” However, Lepage may be changing his tune about Toronto: later he testily remarked that he found the opening-night audience “a bit stiff.”

Linguistically, this year’s festival is less international than usual, with 12 of the 15 major productions coming from English-speaking

Despite its success, the event is endangered

nations. Dublin’s Gate Theatre has given Waiting for Godot a melancholy ripeness that lingers long after the laughter fades. Beckett’s end-of-the-world drama about two tramps, Vladimir (Barry McGovern) and Estragon (Johnny Murphy), reaches its high point with Alan Stanford’s Pozzo. In Pozzo—who enters with his servant, Lucky (Donal O’Kelly) leashed like a dog on a long rope—Beckett has distilled the evils of class and excessive wealth. Pozzo has all the selfdelusion, self-pity, cruelty and secret terror of someone who has put the love of power and money above all else. Stanford plays him with such precise menace that he creates a kind of black hole on

Another Irish offering, Enda Walsh’s Disco Pigs, makes the bleakness of Beckett seem positively genteel. The low fenced square of the set recalls a boxing ring, while the two small red plastic chairs inside it suggest a child’s vision of life. And certainly the play’s two teenage characters, Pig (Cillian Murphy) and Runt (Eileen Walsh), seem lost in regressive narcissism. If James Dean represented one kind of alienated, self-destructive youth, these two have travelled much, much farther down the same road. Out on a nightclub crawl in Cork City, they enter a maelstrom of violence: loyal only to each other, and speaking a private language (that at times is impossible to decipher) they viciously attack others—until they reap their reward in kind.

In one sense, this highly original production is a warning shot about the state of alienated youth. Yet the brilliant and often very funny performances by its two young actors also suggests a more optimistic conclusion: that a new generation of young people is reinventing the explosive possibilities of theatre.

A similar point was made by Hare, the British author of such plays as Plenty and Pravda, during a public interview with CBC journalist Eleanor Wachtel. Enthralling the audience with his wit and thoughtful anecdotes, Hare recalled his early days in British alternative theatre of the Seventies, when he and his friends toured the country in a van, putting on “short, nasty, violent little plays to dramatize Great Britain’s decline—and to burst

through the inhibitions of old-fashioned, esthetic-centred theatre.”

Old-fashioned, esthetic-centred theatre is exactly what Lithuania’s Little Theatre of Vilnius offered in Masquerade by the Russian author Mikhail Lermontov. As directed by Rimas Tuminas, this tale of sexual jealousy plays like a museum piece in which a florid, 19th-century-style of acting and production has been lovingly preserved. Yet for all its poetic attractions, this production is fundamentally moribund. Much more effective was Journey to the Centre of the Earth, based on Jules Verne’s classic novel and staged by a company called LaTroppa, from Chile. Two actors share the stage with a half-scale model of a steam engine. In the course of their descent to the earth’s core, this enormous prop becomes a laboratory, a carriage and a volcano—everything, in fact, but a steam engine. The whole visually witty performance demonstrates a quality shared by all the best theatre at the World Stage: an ability to stir the imagination in ways that the literal images of television and the movies rarely do. □ 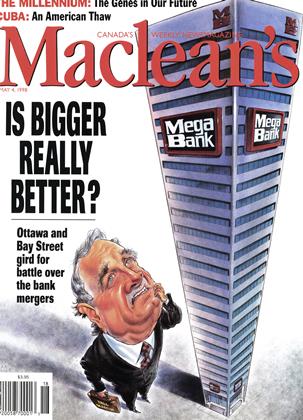