Much to the dismay of many men, Viagra, the much-hyped potency pill from New York-based Pfizer Inc., is available only in the United States and a handful of other countries. This has led thousands of desperate Canadians to cross the U.S. border for the wonder drug. But others are letting their modems do the border-hopping, scouring the Internet for the handful of ethically questionable Web sites that fill Viagra prescriptions without

Marie Berry would like everyone to know that hers is not such a site. For the past three years, the Winnipeg pharmacist and health educator has run a Web service called the Virtual Drug Store (www. virtual dr ugstore.com) , which disseminates information about new

pharmaceutical products. But since Viagra came along, Berry has received hundreds of phone calls and e-mail requests from men who have seen the site and want not information,

but the real thing. “We’ve been getting, on average, about 40 requests a day to buy Via-

gra from us,” she says. The would-be customers—who apparently do not know that Viagra is not approved for sale in Canada or that the Virtual Drugstore is not a prescription-filling service—are from as far away as Bahrain. “It’s incredible,” says the soft-spoken pharmacist. “People will go to the ends of the earth to enhance their sexual performance.” Or, at least, they go as far as their computer terminals.

Number of times the National Hockey League Stanley Cup has been won by Canadian teams, according to USA Today: 49; by American teams: 30

Sales of the 45-cent stamp depicting the Canadian flag versus sales of the same-value stamp showing Queen Elizabeth: 4 to 1

The International Federation of the Phonographic Industry reports that world sales of recorded music were $55 billion for 1997. Percentage spent in North America: 34; in the Middle East: 1

The majority of Canadians say they aren’t tax cheaters. But more men break the rules than women, or at least admit to doing so, and more Ontarians cheat, or admit to it, than people in other parts of the country. Percentage of Canadians who have:

In the 1970s, she was the most prominent woman in Canadian politics. And during her 16 years (1972-1988) as the MP for the Ontario riding of Kingston-and-theIslands, Flora MacDonald’s eloquence was rarely matched in Parliament. Since her defeat in the 1988 election, her profile has dimmed in Canada, but she has risen

to greater prominence overseas through her work to help the downtrodden in areas of conflict. “The greatest challenge I have now is to keep my schedule straight,” says MacDonald, who spends half the year away from her Ottawa home. Now 72, she says her eyes have been

opened by her work for non-governmental organizations, particularly when she headed a January, 1997, Amnesty International delegation investigating the refugee crisis plaguing East Africa since the holocaust in Rwanda. ‘We have to find ways to help the destitute of the world,” she declares.

failed bid for the Conservative party leadership in 1976. She also became the epitome of the Red Tory, and now boasts that her greatest political achievement came in 1979-1980 when, as external affairs minister in the short-lived Joe Clark government, she led the move to admit 100,000 Vietnamese Boat People.

Last month, MacDonald visited South America to continue her latest cause— how to alleviate the poverty of the elderly. Her ideas will be passed on to the United Nations as it prepares for 1999, the International Year of Older Persons. Still a card-carrying member of the Progressive Conservatives, MacDonald says she hopes her career might inspire young females—“women must be involved.” 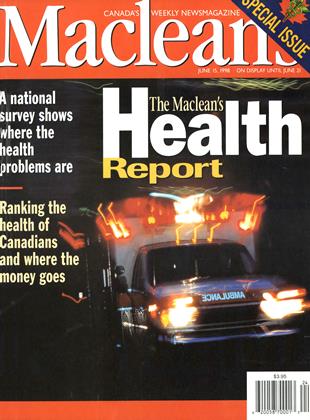