When the 1998 Lilith Fair rolls into Ottawa on August 14, the all-female pop and folk festival will feature some unexpected chords—courtesy of jazz pianist and singer Diana Krall. “I’m really honored to be part of this tour,” says Krall, 32, now living in New York City. And while the Nanaimo, B.C., native has become the darling of the jazz scene—her fourth CD, Love Scenes, released last August has sold more than 100,000 copies, the first for a female jazz artist, and last year she performed at the White House—she points out that musicians are always interested in broadening their audience. “Jazz, obviously, isn’t as commercial as pop, so it’s an opportunity to reach new people. I think crossing artists from different genres is a good thing for everybody.”

Krall and Lilith Fair organizer Sarah McLachlan met for the

first time at the Grammy Awards held in New York in March, and the two performers hit it off personally and professionally.

“Sarah has my records and I have hers,” says Krall. “I love what she does with music.” When the Vancouver singer-songwriter asked Krall to join a lineup of other female musicians, including pop artists Natalie Merchant, Paula Cole, Bonnie Raitt and Sinead O’Connor, Krall signed up for the Ottawa and Vancouver dates of the 57 shows on the North American tour.

McLachlan founded the festival last year as a celebration of women in music, and as a defiant reply to concert promoters who felt it was financial folly to put two female acts back-to-back. The North American tour was a huge success, becoming the top-grossing festival of the year. This summer’s extravaganza kicked off in Portland, Ore., on June 19, and will visit Toronto, Calgary, Edmonton and Vancouver after its Ottawa date. Less than halfway through its schedule, the tour has already sold 650,000 tickets and has surpassed last year’s total of $22 million. The tour donates $1 from each ticket sold to a local charity. Meanwhile, Krall says that while the all-female aspect of the tour is appealing, the main reason she joined was the quality of the musical acts. “I can’t wait to sit and watch the other artists. It’ll be fantastic.”

A Pak attack on tour

A happy lot of things these make days. Se The Ri South Pak Korean golfer became the youngest player to win the McDonald’s LPGA Championship in May. Then, she triumphed at the Jamie Farr Kroger Classic on July 12 with the lowest LPGA tournament score ever—23 under 261 for 72 holes. Going into last weekend’s play, she led the LPGA money list with $955,000 in earnings. And she is only 20 years old. “I have many, many years left,” she says. “I can play in many, many tournaments.”

Pak is definitely this season’s rookie phenom, in the mould of 22-yearold Tiger Woods. But unlike Woods, who began playing as a toddler, Pak started golfing only six years ago. She turned professional in 1996, and qualified for the LPGA Tour on her first attempt a year later. After moving to Orlando, Fla., she joined the women’s tour this year.

Pak’s upcoming appearance at the du Marnier Classic at the Essex Golf and Country Club in Windsor, Ont., from July 30 to Aug. 2, has club management excited. “She is the hottest thing in golf,” says general manager David Loan, who is busy fielding calls from international journalists. Meanwhile, Loan says, Pak doesn’t have to worry about her beagle puppy, Happy, which travels with her. The Essex club is one of the few tournament stops that offers pet care. 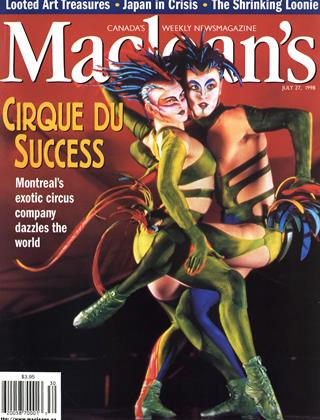