Call of the wild

Call of the wild

August and September are busy months for Cree guide Sam Hunter, the season when polar bears are in greatest abundance along the western coast of Hudson Bay. Sluggish in a sort of waking hibernation, the bears await the freezing of the bay that will allow them to begin roaming across the Arctic to hunt seals. Based in Peawanuk, a community of about 300, Hunter’s Hudson Bay Polar Bear Park Expeditions offers small six-day tours into the tundra to see beluga whales, hundreds of species of birds, wolves and, of course, the white bears. At a cost of $2,250—excluding flight—guests getto live in canvas teepees and learn to make arrows or weave tamarack branches into geese, the traditional Cree hunter’s decoy. Hunter says there is little danger of the huge carnivores attacking: “We Cree have lived around the bears all our lives. We know how to predict their movements.”

To their store of traditional knowledge, native ecoentrepreneurs are now adding some new understanding. “When we started running the excursions, we discovered the Europeans like the Cree cultural experience,” says Hunter, "but the Americans are more interested in sightseeing and doing a lot of photography.” He has also learned that many of the Europeans willing to spend the money to visit his remote corner of Ontario tend to be vegetarians—a clientele not interested in the camp diet of goose, fish and sometimes caribou. "We need to get into the vegetarian menu,” he says, "but we don’t know anything about that. We’re meat-eaters here.” 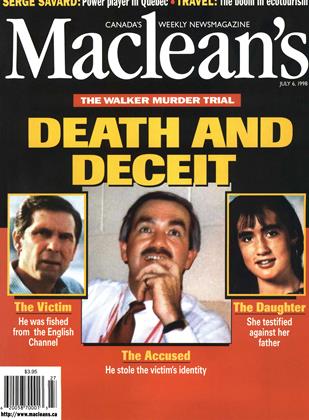