Osama bin Laden is a slender man with a thick black beard, lightened by traces of grey, and soft eyes that give his face a melancholy air. He does not look dangerous, but according to American officials the Saudi Arabian exile, about 40, is the world's leading terrorist. Now based in Afghanistan, he is consumed by reli gious zeal, a hatred of Americans and a desire to drive them out of the Middle East. And bin Laden has used his personal fortune—estimated at $450 million—as a war chest to train Muslim extremists and finance their operations. U.S. intelligence experts believe he was behind the near-simultaneous bombings of American embassies in Kenya and Tanzania on Aug. 7 that killed 263 people, including 12 Americans, and injured 5,500—and that those attacks foreshadowed a major escalation in his campaign of terror.

As they gathered evidence following the East African attacks, U.S. military and intelligence officials quickly became convinced they had to strike bin Laden before he struck again. They received final approval to do that from President Bill Clinton at 3 a.m. last Thursday. Ten and a half hours later, U.S. naval vessels, located almost 2,000 km apart in the Arabian and Red seas, fired around 75 cruise missiles at bin Laden terrorist camps near the town of Khost in northeastern Afghanistan, and at a suspected chemical weapons plant, believed to be subsidized by bin Laden, in the Sudanese capital of Khartoum.

Whatever their military effect, the political impact was immediately obvious. The strikes deflected attention from the crisis threatening Clinton’s presidency—his admission earlier in the week of an inappropriate relationship with former White House intern Monica Lewinsky (page 26). In fact, some skeptical political opponents—recalling the 1997 movie Wag the Dog in which a U.S. president creates an international conflict to divert attention from his sexual dalliances with a teenager—questioned the timing of the attacks. “That cloud of doubt is there now,” said Republican Senator Dan Coats of Indiana, “because the President has put himself in a position where it’s hard for us to trust him.” But while some saw life imitating art, other leading politicians insisted there was no connection between the military strikes and Clinton’s domestic troubles. Even such staunch Republicans as North Carolina Senator Jesse Helms and House Speaker Newt Gingrich supported the President. And a USA Toifay-CNN-Gallup poll conducted the same day as the attacks showed that 66 per cent of respondents endorsed the action. Clinton appeared determined to extract maximum political advantage. He interrupted a family vacation on Martha’s Vineyard with wife Hillary and daughter Chelsea to fly back to Washington and give a 7 V2-minute televised address. “Our target was terror,” Clinton said. “Our mission was clear—to strike at the network of radical groups affiliated with and funded by Osama bin Laden.” Intelligence sources in Washington told Maclean’s they had “strong indications” within a few days of the embassy bombings that bin Laden was deeply involved, and a preliminary decision was made to stage an attack. The United States maintains a fleet of 24 warships in the Persian Gulf, including seven carrying cruise missiles. Commanders of those vessels were ordered to take up positions in the Red and Arabian seas. One intelligence source said Russian satellites would certainly have picked up their movements, and Moscow analysts would realize what was planned. A leak could not be ruled out. “Once the ships were in place, they had to fire or move on,” said the source.

U.S. officials said the Sudan-bound missiles, 5.4 m in length and carrying up 450 kg of high explosives each, had inflicted “moderate to heavy damage” on the Khartoum factory known officially as AÍ Shifa Pharmaceutical Industries. The missiles were fired from two ships in the Red Sea. Sudanese officials reported that at least 10 workers were injured in the attack on the plant, where U.S. officials claim components for the deadly nerve gas VX were manufactured. Minute amounts of the agent, when applied to human skin, cause violent seizures, loss of muscle control, paralysis of the respiratory system and death within 15 minutes. The Sudanese insisted the factory only turned out medicines.

Five American naval vessels, including a submarine, fired about 60 missiles at bin Laden’s extensive operations in Afghanistan, which include training facilities, a military base and a support camp. He has used his wealth to build firing ranges and indoctrination centres, acquire tanks and armored personnel carriers, and build up stores of ammunition and explosives.

Afghanistan’s ultraorthodox Taliban government said at least 21 people died in the attacks and at least 53 were wounded. Bin Laden was not among them—according to Pakistani media interviews with survivors, he and other key commanders skipped a planned dinner at his camp in Khost. The camp was later levelled. Other sources reported that one training camp operated by militant Kashmiris, and a second located 16 km away, were completely destroyed. Intelligence reports suggest that there may have been as many as 600 militants in the camps. A group of Pakistani journalists travelling in the area afterward reported seeing 20 craters near the first camp, some of them 12 m wide and six metres deep.

News of the strikes led to anti-American demonstrations in many parts of the Muslim world. Crowds outside the U.S. Embassy in Khartoum stoned the deserted building while students at Tehran University in the Iranian capital shouted “Death to America” during their morning prayers. U.S. flags were burned at protests in the Pakistani capital of Islamabad, and in Tripoli where Libyan leader Moammar Gadhafi led the demonstrators. “This will cause more hatred against America,” said Mustafa Mashour, leader of the outlawed Muslim Brotherhood in Egypt, “and ignite the flame of extremism and instability in the region.”

Those flames already burn intensely among bin Laden and his followers. The Saudi native inherited his money from his father, a Yemeni-born contractor who amassed a fortune by building mosques, palaces and civic works for the Saudi royal family. Ironically, bin Laden was a U.S. ally in the 1980s in supporting the battle against Soviet troops in Afghanistan. But he was expelled from Saudi Arabia in 1991 after he turned against the United States for its actions in the Gulf War, which he felt violated the homeland of Islam’s two holiest places, Mecca and Medina. He makes clear he sees his campaign as a holy war, directed by God, in which punishments like the latest strikes simply breed more attacks. “Each action will solicit a similar reaction,” he told ABC News correspondent John Miller in late May. And innocent bystanders will die. ‘We do not differentiate between those dressed in military uniforms and civilians,” he has said. “They are all targets.”

Intelligence sources said the U.S. missile strikes were aimed at derailing a broad campaign of terror that included the East African bombings. In June, according to these sources, the CIA concluded a 15-month investigation into a plot to bomb the American Embassy in Tirana, Albania. Based on CIA findings, the Albanian government arrested five Egyptians funded by bin Laden. They have since been sent back to Egypt, where they were wanted for terrorist activities.

The sources say the CIA has also uncovered hard evidence that a terror group, connected to bin Laden, was planning to bomb an unnamed third U.S. Embassy in Africa. According to informants, intelligence agencies have found convincing evidence of bin Laden’s links to the Khartoum factory bombed last week and to a plot to use chemical weapons in another attack. In fact, the state department has recently closed or scaled back operations at embassies in Albania, Pakistan, Eritrea, Malaysia, Uganda, Egypt and Yemen.

Although last week’s strikes went smoothly, high-ranking U.S. military and intelligence officials remain on edge. They are convinced that bin Laden is committed to staging more attacks on U.S. installations abroad—and at home. While they are confident they will stop many of them, others may be successful. “In a very real sense, we are at war,” said one military official. At war against a determined and unpredictable enemy.

With WILLIAM LOWTHER in Washington 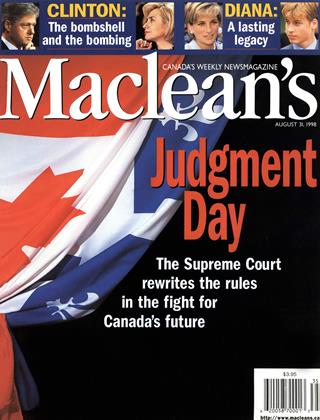