Fears of a ‘death spiral’

Japan holds the key to stopping a global slump

As she prowled the aisles in the discount 100-Yen Shop near Tokyo’s Shimbashi railway station, Kaori Matsuda stopped to pick out a few meagre necessities. “Everyone I know is tightening their belts,” said the 31-year-old office worker. “I haven’t bought any big items in a long while.” Just how to get her spending in a big way again is troubling political leaders as far away as Washington and London. The world economy is being dragged ever closer to recession as the financial storm that roared out of Asia last summer continues to batter country after country. The gloom will not lift, say analysts, until Japan’s stalled economy comes to life and drags the rest of Asia out of the mire with it. But the country’s plan to clean up its financial sector and kickstart growth with tax cuts remains trapped in political gridlock. And Matsuda is not about to splurge. “There is so much bad news,” she said, “you have to be worried.” Across the world, in fact, there was plenty to worry about last week. As most markets in Asia continued to slide, riots broke out in near-bankrupt Indonesia, the Philippines forecast a recession, Malaysia brought in controversial currency controls and officials in Hong Kong defended what American free-market guru Milton Friedman called their “insane” decision to spend $3 billion buying up battered securities on the local stock exchange. In Russia, the ruble continued its free fall, casting a cloud over European banks that have loaned the country more than $45 billion. In Latin America, risk-rating agencies downgraded the foreign debt of Venezuela, Brazil, Mexico and Argentina over concerns that the countries will have trouble paying it back. And at an emergency meeting in Washington with International Monetary Fund officials, Latin American finance ministers hinted that if the Asian flu spreads further into their slowing economies, they, too, may soon need a multibillion-dollar bailout to stave off bankruptcy.

Canada and the United States have a lot riding on the health of the Latin American economies, which have seen their raw material exports to Asia collapse. The region consumes 20 per cent of U.S. exports, while American banks have outstanding loans there of nearly $120 billion. When coupled with the drag from the Asian crisis, says Josh Mendelsohn, Toronto-based chief economist for CIBC, a dramatic downturn in Latin America could stall the U.S. economy. And since the bulk of Canadian exports find their way into the American market, a falloff in U.S. demand would hit Canada’s economy hard. Last week, economists were rapidly revising their predictions for U.S. growth— and the direction was suddenly downward. “I am very concerned,” said Ronald Wirick, a professor of finance and economics at the University of Western Ontario. “There is a risk of a worldwide recession.” Unfortunately, the task of fighting a global slump

rests largely on the shoulders of Japan’s bickering politicians. Without a recovery in the world’s secondbiggest economy, says Mendelsohn, it is difficult to see how Asia can rebound and thereby trigger an increase in commodity prices. And until raw material prices rise, the economies of major exporters like Russia and Argentina will continue to suffer. In San Francisco last week, U.S. Treasury Secretary Robert Rubin again pressed Japanese Finance Minister Kiichi Miyazawa to jump-start his country’s economy. “It is absolutely critical,” said Rubin, “not only for Asia but also for the rest of the world.”

Tokyo’s challenge is immense. Along with persuading shell-shocked consumers like Matsuda to spend again, leaders must clean up the country’s banking sector, which is suffocating under as much as $1 trillion in failed and problem loans. Earlier this

year, the government tried to stimulate spending with temporary tax cuts. But thrifty consumers simply banked the savings and the economy remained paralyzed. Further attempts to revive growth— including a reform package that includes permanent tax cuts—remain trapped in a standoff between Prime Minister Keizo Obuchi’s Liberal Democratic Party and opposition politicians. That is deeply troubling to foreign onlookers. “Japan needs to move faster,” says Len Edwards, Canada’s ambassador to Japan, “not only for its own economy but also for other countries’ exports.”

Just how Obuchi’s government intends to save the banking sector was no clearer last week as a debate began in parliament over the future of the Long-Term Credit Bank, once one of Japan’s largest, but now saddled with $31 billion in bad loans. The government

fears that if the bank fails, it could set off panic in international currency markets and drive the value of the yen even lower. As a result, the government wants to either pump billions of dollars of public money into the stricken institution or take it over outright, swallow its debt and sell it back to the market.

Opposition politicians—and many foreign analysts—say such a so-called soft landing approach will only delay an economic turnaround. Bankrupt banks, they argue, should be allowed to fail at the whim of market forces. “They have to purge the system,” says John Alkire, managing director of Morgan Stanley Asset and Investment Trust Company in Tokyo, “and weed out the good from the bad.” U.S. President Bill Clinton and Chinese President Jiang Zemin have both asked Japan to step up efforts to stimulate the economy with permanent tax cuts. But the malaise is so deep that Kenneth Courtis, chief economist at Tokyo-based Deutsche Bank Group Asia, believes only a mammoth 15-per-cent cut in personal income taxes will fire up the Japanese economy.

Tokyo’s reluctance to take decisive action could unleash what some analysts darkly call the “death spiral” scenario, in which China is forced to devalue its currency. If the yen resumes its slide—some predict it will hit 160 to the U.S. dollar by December, compared with 134 at the end of last week—Japanese exports will become cheaper as they compete against Chinesemade goods. To hold their position, goes the theory, the

Chinese will be forced to devalue, triggering the feared spiral as other nations across Asia—and beyond—follow suit.

If China does devalue, the trigger may be the Hong Kong dollar. Since last December, officials in the former British colony have spent nearly $15 billion in currency markets, as well as the $3 billion, buying local stocks, in a bid to defeat speculators who believe the local dollar cannot maintain its 15year-old peg of about 7.8 to the U.S. greenback. China’s newly regained territory, autonomous in financial affairs, still has almost $120 billion in foreign currency it can use to fight for the dollar, but time may be running out. “If the Hong Kong dollar goes,” warns Mendelsohn, “it will drag China down with it.” Then, worry the pessimists, the debt-laden dominoes in Latin America start to fall. “If Latin America goes,” says David Wyss, an economist at Standard and Poor’s Corp. in New York City, “it will be hard to keep us from getting sucked into the whirlpool.”

Some governments have tried to swim against the global stream of free-flowing capital. Hong Kong’s stock and currency play was one attempt. Another was Malaysia’s dramatic decision to erect a currency barrier around itself. Declaring that “the free market has failed drastically,” Prime Minister Mahathir Mohamad said the local ringgit would no longer trade on world markets, and its rate would be fixed. To erase any opposition to the decision, Mahathir fired his respected finance minister and heir apparent, Anwar Ibrahim. Top officials of the central bank had already resigned in protest. The result was a sudden bounce in the local stock market as interest rates came down, but foreign analysts said that in the longer term Malaysia’s move—like Hong Kong’s—would simply scare off needed investors.

A more helpful step, in the view of many analysts, would be for U.S. Federal Reserve chairman Alan Greenspan to lower U.S. short-term interest rates. That would address two key problems. The Chinese and Japanese desperately want him to cut rates to stop the flight from yen into dollars; this, they believe, would push up the value of the Japanese currency and stave off the death spiral. Reducing interest costs would also keep American consumers buying and allow the U.S. economy to soak up imports. Greenspan had long resisted a rate decrease, fearing greater inflation. But last week, he signalled a possible change of mind, telling an audience at the University of California at Berkeley that the international crisis means that rates could well go down. “It is just not credible that the United States can remain an oasis of prosperity unaffected by a world that is experiencing greatly increased stress,” he said. As fears of a global recession intensify, Greenspan is under increasing pressure to become the world economy’s savior. 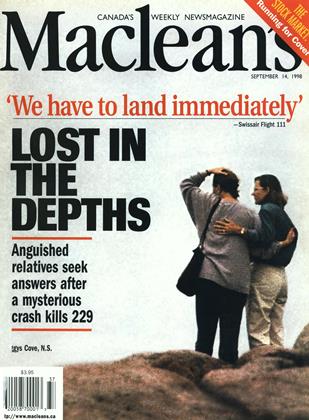