Raising the stakes over magazines

Raising the stakes over magazines

A senator in court

Only a decade ago, many considered him the most powerful man in Saskatchewan. But as Senator Eric Berntson sat in a Regina courtroom last week, those days seemed very far away. The burly, 57-year-old Tory power broker, who served as deputy premier for most of the 1980s under former Saskatchewan premier Grant Devine, spent much of the week hunched in front of a courtroom television monitor as his personal and corporate bank records were flashed up on the screen. The documents form part of the Crown’s effort to lay out a paper trail which, it alleges, shows that Berntson defrauded taxpayers by submitting $68,055 worth of false expense claims between 1987 and 1990. As prosecutor Sharon Pratchler told Court of Queen’s Bench Justice Frank Gerein: “The Crown intends to prove that the accused entered into a pattern of fraudulent activities to obtain money for personal gain.”

Berntson is also charged with committing a breach of trust by diverting $125,000 from the publicly funded Conservative caucus to the Conservative party in 1987. The senator, who has pleaded not guilty to both charges, is one of the last—but, by far, the most prominent—in a long string of Saskatchewan Tories brought before the courts over the past three years. In what is easily the biggest political scandal in the province’s history, 21 Tories—including 18 former legislators—have been charged with defrauding taxpayers of more than $800,000 between 1987 and 1991 through false expense claims and misuse of public funds. Of those charged, 13 were convicted, four acquitted and one had the charges against him dismissed for lack of evidence. Three other cases, including Berntson’s, are still before the courts.

The seeds of the Saskatchewan scandal were planted in 1987 when Devine’s caucus agreed to pool, into a central account, 25 per cent of the communications allowances that MLAs are entitled to receive from the legislature. The Crown has alleged—and in many cases proven—that some members of the Devine government signed illegitimate expense allowance claims that were submitted to the legislature along with invoices from four shell companies set up by John Scraba, then the caucus communications director. After the legislature’s finance office approved the invoices, cheques were issued to the phoney companies. That money was

then funnelled back to several caucus members and Scraba in the form of cash and merchandise.

The RCMP were first alerted to the fraud in July, 1991—shortly before Roy Romano w’s New Democrats ousted the Conservatives—when legislature clerk Gwenn Ronyk reported some suspicious invoices. The next big break came in April, 1992, when a Regina bank that was moving to another location opened an unclaimed safety

deposit box and discovered $150,000 in $1,000 bills. Police later tracked down a second safety deposit box containing another $90,000. Both boxes had been registered by Scraba under the same false name. In November, 1995, Scraba pleaded guilty to fraud and was sentenced to two years less a day in jail. About the same time, former Tory caucus chairman Lome McLaren also entered guilty pleas to three fraud charges. Receiving the stiftest sentence of any of the accused to date, McLaren was given 2’/2 years for his central role in organizing the scam. He was released from

jail to a halfway house after serving eight months.

Berntson was among the last to be charged—in January, 1997—and his case caused an immediate stir. The senator was, after all, something of a legend in Saskatchewan politics. First elected in 1975, he played a pivotal role in rebuilding the thenmoribund Tories and in recruiting Devine, who led the party to a landslide victory in 1982 over Allan Blakeney’s New Democrats. In addition to taking on cabinet duties, Berntson was appointed deputy premier and house leader. He was widely viewed as the one who ran the day-to-day affairs of the province, freeing the affable Devine to be the government’s public pitchman (Devine, now a consultant in Regina, has never been linked to the fraud and has repeatedly denied any knowledge of it).

A farmer and former military man, Berntson proved to be a gregarious and often witty

politician. But he could also be extremely hard-nosed, and was respected and feared in equal measure around the Saskatchewan legislature. “He was seen as the strongman of the Devine government,” says University of Saskatchewan political scientist David Smith. “He was definitely the engine, the energy behind that party.” In the summer of 1990, Berntson announced his intention to leave provincial politics—at a time when Devine’s Conservatives had sunk badly in public opinion after racking up one of the highest per capita debts in Canada. Later that year, prime minister Brian Mulroney

appointed him as one of a posse of new Tory senators charged with ushering in the Goods and Services Tax. Berntson later served as his party’s deputy leader in the Senate, a position he relinquished after being charged with fraud and breach of trust. He remains a member of the upper chamber.

During the first week of what was expected to be a three-week trial, the Crown introduced a blizzard of banking, corporate and Saskatchewan department of finance records to bolster its allegation that Berntson misused public funds. Sgt. John Leitch, the RCMP’s lead investigator into the corruption scandal, testified that, among other transactions, Berntson submitted a $5,000 expense claim on his MLA communications allowance in June, 1987. The claim was supported by an invoice from Dome Advertising—a now-defunct company that was one of the Devine government’s preferred ad agencies. Berntson said he had already paid the bill and was asking the legislature to reimburse him directly. But Leitch said his search of the records revealed no evidence of a $5,000 payment from Berntson to Dome.

Similarly, the Crown alleges that in July, 1990, Berntson submitted two false expense claims totalling $7,870, which were supported by invoices from Airwaves Advertising, a company operated out of the Tory caucus office by Scraba. Leitch testified that Scraba told him during a 1995 interview that he had paid out thousands of dollars to a number of MLAs, including Berntson. But during cross-examination of Leitch, Berntson’s lawyer, Mike Megaw, expressed amazement that the RCMP officer had accepted the word of Scraba, who at that point was in the middle of a preliminary hearing on the charges against him. ‘You met with him in the midst of a $l-million fraud trial and you didn’t think he might be looking for a break from the RCMP?” asked Megaw. “No,” replied Leitch. “No?” said Megaw sharply. “How long have you been a member of the RCMP?” Responded Leitch: ‘Twenty-five years.”

Both Scraba and McLaren were expected to testify as the Crown continues to present evidence this week. Berntson—who has declined all public comment on the charges against him—has hinted that he may take the stand when the defence gets its turn. But whatever verdict is rendered in this latest trial, the series of protracted criminal cases involving so many former members of the Devine government has already claimed one clear victim beyond the courtroom. In a bid to distance themselves from the scandal that is now their most memorable legacy, members of the Saskatchewan Conservative party voted at the end of 1997 to render their organization inactive for the next two provincial elections. 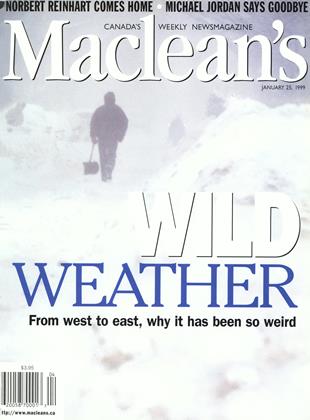