Doling out patronage is a tricky business. Plum appointments must be visible enough that friends know loyalty has its rewards—but the system is best kept out of the eyes of the public. These days, the federal government is having trouble with the second part: patronage is being exposed to the glare of critical scrutiny with unusual regularity. Discontent seems to have started down on the waterfront. Shipping industry groups were stunned earlier this year when their formal recommendations for board members for the revamped port authorities from Halifax to Vancouver were often passed over in favour of friends of the government. In Toronto, the former harbour commission chairman, David Perry, who

also happens to be a longtime Liberal fund-raiser, is suing Transport Minister David Collenette over the way the appointments were made.

And criticism of Prime Minister Jean Chrétiens use of patronage has spread beyond Canada. In his August cabinet shuffle, Chrétien named former trade

minister Sergio Marchi as Canadas ambassador to the Geneva-based World Trade Organization. The appointment of the longtime Chretien loyalist might have been routine—had he not been replacing a highly respected trade negotiator, John Weekes. Londons Financial Times took note, wondering why Canada would dump a savvy insider at the start of a complex round of WTO negotiations.

A third controversy swirls around an appointment that has yet to be made: a new president for the Canadian Broadcasting Corp. Since Perrin Beatty left the post last month, acting president James McCoubrey has been running the show. Rumours abound as to whom Chrétien will put at the helm of the country’s biggest cultural institution. But as the Prime Minister mulls over his choice, the nonprofit lobby group Friends of Canadian Broadcasting says the delay has left the CBC adrift. It is calling for the appointment to be put at arm’s length from the government.

Such controversies raise questions about Chrétiens overall record on patronage. Back in 1994, his newly elected government vowed to scale down Tory-era excesses. And after three years in office, the Liberals boasted they were taking steps to slash 20 per cent of patronage jobs, or 868 positions. But

last week, officials close to the appointment process were unable to provide figures to back up such claims. The government’s own patronage bible, the Governor in Council Appointments Guide, listed 2,240 appointees at the start of this year—down just 146 from 1995, when the Liberals were beginning to streamline patronage-laden agencies. More evidence that patronage is hardly passé: an internal government briefing note from last year, obtained recendy by the Reform party under the Access to Information Act, discloses that during the period when the Liberals were reviewing agencies with an eye to paring them back, they actually created 112 new patronage jobs.

We ll bet on the little green men

For months, governments and companies have issued soothing reassurances about their readiness for computer glitches on Jan. 1, 2000—the so-called Y2K bug. Bookies, at least, seem persuaded, and have posted some very attractive odds for those inclined to wager on a potential catastrophe or two. With less than 100 days to go before the big day, Costa Rica-based NASA International is taking online wagers on Y2Kdisasters—anythingfrom a stock market crash to an invasion by extraterrestrials. Odds posted so far on the firm’s Web site (www.betonsports.com) include:

Financial crises: 1,000 to 1 that a Y2K problem will shut down the U.S. Federal Reserve for at least 24 hours; 700 to 1 that Citibank, Hong Kong and Shanghai Banking Corp.,

USB, or the Dresdner Bank will similarly close.

Power failure: 20 to 1 that a major American utility serving more than 200,000 customers or a European telephone company will shut down for 48 hours or more.

Plane crash: 300 to 1 that a Y2K glitch will down a commercial airliner.

Stock market crash: 30 to 1 that the Dow Jones industrial average will drop more than 200 points on the first day of trading in 2000.

Unexpected visitors: 100,000 to 1 that an alien spaceship will land in Washington on Jan. 1.

Armageddon: 1,000,000 to 1 that the world will end on Jan. 1. (It is not explained how bettors would collect their winnings on the day after Armageddon.)

Virtually anything is possible

Ordinarily, Joe Attard of the diesel division of General Motors of Canada Ltd. in London, Ont., uses conventional computers to oversee the design of lightarmoured military vehicles. But last September, Attard got a glimpse of the future on a visit to the National Research Council of Canada’s Integrated Manufacturing Technologies Institute, also in London. There, he and six fellow engineers donned $800 goggles and sat in front of a virtual reality projection screen called a power wall. To put the technology through its paces, the GM design team brought with it the computerized images of an as-yet unbuilt engine and transmission. The vehicle’s power plant and drivetrain were then displayed in three dimensions, with 3,000 parts viewable from any angle. “Within seconds of bringing it up,” says Attard, “we spotted a number of errors.” Detecting design flaws before building expensive prototypes is just one of the remarkable applications of virtual reality. Recognizing its vast potential for product development, General Motors partnered with the NRC’s manufacturing institute to create the Virtual Environment Technologies Centre, a $6-million research and educational facility located at the University of Western Ontario in London. On Sept. 24, Industry Minister John Manley inaugurated the centre—billed as the best in the world—whose other collaborators are SGI Canada Ltd., a builder of supercomputers, and Electrohome Ltd.’s Fakespace Systems Inc., which makes virtual reality equipment. Gian Vascotto, the institute’s director of systems simulation and control research, says the VET Centre will lead to better manufactured goods made more quickly and cheaply: “You can simulate almost anything in the world with this.”

Some of the envisioned applications include taking a magnetic resonance image of a brain tumour, projecting it into virtual reality and visualizing how to best extract the cancerous growth. Biochemists can display a molecule, go inside it and look about to determine where to tweak it so that the molecule functions better as a drug. To explore these possibilities and others, the centre is made up of several components. There are two private design rooms equipped with two-by-2.5 metre power-wall screens, a glass-topped interactive workbench that resembles a drafting table, and a 35-seat theatre that houses a seven-by-2.5 metre glass screen, the largest in the world. Finally, the centre’s jewel is its 27-cubic-metre virtual reality room, called the cave, which projects the image onto the walls and the floor. Here the 3-D experience is at its best, says Vascotto, and never fails to impress. “No one,” he says, “has walked out of here and said, ‘What the hell do we need this for?’ ”

Sony and the pirates

In an effort to curb the distribution of pirated music over the Internet using MP3 audio technology, Sony Corp. introduced its Memory Stick Walkman. Using Sony’s encryption technology, Walkman owners can, securely, and legally, buy music over the Net and store it on the company’s memory stick. To play the music, the stick is inserted into the Walkman. The portable player, which will be released in i Japan on Dec. 21, cannot play I pirated MP3 files. It will retail § for $630. 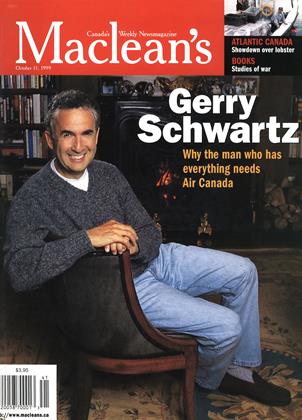