Michael J. Fox begins with Wayne and Shuster, who appeared more times on The Ed Sullivan Show than any other act. The list continues: David Steinberg, Rich Little, Dan Aykroyd, Martin Short, John Candy, Dave Thomas, Leslie Nielsen (post-Airplane!), Mike Myers, Catherine O’Hara, Ivan Reitman, Lome Michaels, Eugene Levy, Rick Moranis, Norm MacDonald, the Kids in the Hall, Jim Carrey. All Canadian, all top-notch comedians. Fox then poses the question: ‘What makes Canadians so funny? Would these people all have the same sense of humour if they were, uh, Latvian?” His quip gets the evening’s first laugh from the audience of 1,000 New Yorkers and Canadian expatriates, including journalists Robert MacNeil and Morley Safer. The mere thought that a country as reputedly mild and retiring as Canada might harbour a talent for the rebellious art of comedy sends the New York City crowd into hysterics.

The gathering, assembled last week in the Upper East Side’s trendy 92nd Street Y, was hoping for insights as well as laughs.

They had paid $18 a ticket to hear, along with Fox, Saturday Night Live creator Michaels, comedian and actor Short and SCTU icon Levy ruminate on the Canadian comedy phenomenon. Had the panel discussion—dubbed “Why Are Canadians So Funny?”—occurred in Vancouver, for instance, it would have sold out, but raised little surprise. After all, homegrown comedians have long been a source of national pride. But in the United States, comics such as Short and Fox are famous for being funny, not for being funny Canadians. So organizers were surprised when the evening, produced in conjunction with the Canadian Consulate, sold out in less than a week and attracted 30 newspaper reporters, seven television crews and a handful of radio journalists. ‘We’ve never seen anything like it,” said one organizer.

Neither had the audience. “I don’t think Americans give Canada a lot of thought,” says Kendra Moyer, a 31-year-old arts administration student at Columbia University. “I’m surprised Canada produces so many big comedians. It doesn’t seem like an in-your-face culture.” It was this contradiction the audience wanted explained. To many Americans,

Canada is a nice, cold, polite, rustic place, epitomized by Bob and Doug Mckenzie, the happy hosers created by SCJVs Moranis and Thomas. Americans want life, liberty and the pursuit of happiness. Canadians seek peace, order and good government. How could such a culture produce a frenetic comedian like Jim Carrey, whose signature gag in Ace Ventura: Pet Detective was pretending to make his backside speak?

One factor, according to the four funnymen, is Canada’s remoteness from the Hollywood machine. ‘You just assume nobody is paying any attention,” says Fox. Canada is, thanks to the relative obscurity of its entertainment business, a place to experiment and hone your craft, explains Michaels. Canadian comics often have years of experience under their belts once they decide to cross the border. They arrive as unique commodities—seasoned newcomers.

Canadians leave because they feel they need the stamp of American approval in order to be taken seriously in Canada. Michaels worked at the CBC in thel960s, producing and co-starring in The Hart and Lome Terrific Hour. “I told the then-head of light entertainment at the CBC that I wanted to stay but that I had offers from America,” Michaels told Maclean’s during an interview in his NBC office held after the panel discussion. “He told me, ‘If you’re that good, why are you here?’ ”

To Short, heading south is a matter of plain economics: “The money makes a drain to America. You have to come here.” The Dumbells, a First World War serviceman’s troupe, were the first Canadians to score in the United States. In 1919, their music-hall show Biff Bing Bang was a hit on Broadway. In the 1950s, Johnny Wayne and Frank Shuster succeeded both on the CBC and on CBS. The largest wave of Canadian comedians stormed the United States in the 1970s and 1980s. Michaels’s Saturday Night Live, the longest-running and most highly rated late-night comedy show, revolutionized the way North Americans watched television. It also made stars of Aykroyd and later Myers. SCTV, a show born on Canada’s Global Television and transferred to NBC, introduced American viewers to Candy, Short, O’Hara and a host of other Canuck comedians.

Curiously, British and Australian comedians do not experience the widespread acceptance of their Canadian counterparts. The panelists agree that Canada’s exposure

to American pop-culture and politics, first through the movies and radio, and later, television, gives its comedians an advantage. As Short points out, Americans watch television, Canadians watch American television. Adds Michaels: “I first realized the difference between Canada and America by watching American television. Canadian culture in the ’50s and ’60s had a markedly English accent. We were influenced by Monty Python. In Canada, you got Canadian, English and American comedy.” Canadians ingested American cultural icons, such as Leave It to Beaver (which SCTV later savaged) , but felt removed from the American experience. This distance bred satire. The comedians most famous for lampooning Richard Nixon were Canadians Little and Aykroyd. Saturday Night Live brought political satire, which U.S. TV execs viewed as a ratings killer, to network television. “As a Canadian, I felt I had a God-given right to f— with American politics,” says Michaels. “The network people just looked at the ratings, which were high, and said ‘OK.’ ”

When Canadians did tune in to their own broadcasts, they were met with uniquely Canadian absurdities. Short, for instance, gave the New York crowd a brief lesson on the CFL: “It had eight teams, two of which were named Rough Riders. So, you could watch the news and hear: ‘Rough Riders 28. [pause] Roughriders 7.’ ”

All four comedians feel an affection for Canada that is tinged with a sense of alienation. The Canadian love of rules and politeness, they observe, made comedy a socially risky venture. “I was considered strange,” says Fox. “Then I came down here and was rewarded for doing the things I was ridiculed for at home. I thought, ‘I do it here and they give me money.’ ” Michaels agrees, adding: “Canada is a country where celebrating is considered showing off. In Canada, it’s called flag-waving. In America, it’s called patriotism. If It’s a Wonderful Life was made by a Canadian, it would be called It’s an All Right Life.”

The situation is changing. There is now room for comedians on Canadian television. The CBC boasts The Royal Canadian Air Farce and This Hour Has 22 Minutes. Newsroom director Ken Finkleman has established himself as a top-flight comedy series producer. The Comedy Network launched Open Mike with Mike Bullard, the country’s first successful late-night talk show. Still, the “drain” south continues, motivated, at least in part, by a desire to steal some of the spotlight that shines on the colossus next door. “I remember as a kid really taking it personally when an American announcer mispronounced ‘Ottawa,’ ” adds Short. “He called it ‘Oh-ta-wa.’ ” Such American gaffes will continue. Canada remains famous for hockey, snow and maple syrup. It can now add comedy to that list. □ 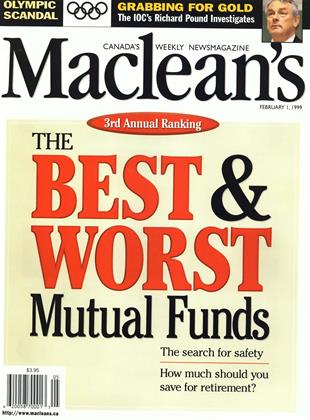