After Jordan's King Hussein, a generation of aging Arab leaders may soon disappear

Among the host of enduring images to emerge from the funeral of Jordan’s King Hussein, there was none so poignant—nor politically charged—as that involving Hafez Assad. Syria’s president was captured in a pensive mood, gazing down upon the coffin of his old foe, palms upturned in Muslim supplication, lips murmuring a silent prayer. His words were not recorded, but his thoughts at that moment may well have dwelt upon mortality, both his own and that of many of his neighbours. For like the fallen monarch, Assad is also gravely ill. So, too, is King Fahd of Saudi Arabia and Palestinian leader Yasser Arafat. It may not be long, in fact, before all three follow Hussein. When they do, they will merely be the forerunners for an entire generation of aging Arab autocrats who, sooner rather than later, are about to die. And that is a prospect that many find alarming, raising the spectre of widespread instability in a notoriously volatile region of the world.

“The leaders are frightened,” says Talal Salman, editor of the Beirut daily newspaper AlSafir. “But the people are frightened twice over. They fear their leaders when they are around and fear their absence even more, as their demise could be the harbinger of countless calamities.” For almost every Arab regime, nature’s clock is ticking ominously. Hussein’s 46 years on Jordan’s throne may be something of a modern record, but many of his fellow Arab rulers are not far behind. Morocco’s King Hassan has been in power for 38 years, Bahrain’s Sheik Issa bin Khalifa for 36. Sheik Zeid of Abu Dhabi is 80 years old. And what is true for the monarchies is just as true for the republics. Despite his failing health, Syria’s Assad was last week re-elected, unopposed, for his fifth sevenyear presidential term. Later this year, Egyptian President Hosni Mubarak, 70, will run, also unopposed, for his fourth six-year term. Next September, Libyan leader Moammar Gadhafi is scheduled to celebrate the 30th anniversary of the revolution that brought him to power. Saddam Hussein has been the strongman of Iraq for almost two decades. In most of these countries, succession, when it comes, will, according to AlSafir’s Salman, “add to the region’s already serious political, economic and military dangers the

threat of internal feuding or civil war— either within the dead leader’s entourage, or between various segments of the people who have been muzzled by repression.”

Nowhere is that danger more imminent or more threatening than in Jordan’s immediate neighbourhood. The transfer of power in the kingdom from Hussein to his son, 37-year-old Abdullah, may have progressed smoothly so far, but potentially disruptive succession battles could soon break out on any of its four borders. To the south, Saudi Arabia’s Fahd, 76, has never fully recovered from the stroke he suffered in 1995. To the north, Syria’s Assad, 70, has been in frail health for years, apparently due to successive heart attacks. To the west, Palestinian leader Arafat, who turns 70 later this year, is betraying more and more symptoms of the Parkinson’s disease everybody but senior Palestinian officials claim is slowly killing him. Finally, in the east, Iraq’s Hussein may not be showing any signs of ill health but, given the evident U.S. determination to bomb his regime out of existence, his longterm prospects are poor.

Of all the ailing Arab rulers, it is probably Fahd who is closest to the end. The Saudi monarch has undergone several surgical operations to correct complications arising from his stroke, none of them very successful. He has been confined to a wheelchair for the past several months. On the rare occasions he travels by air, he has been hoisted onboard his private jet by crane. A mobile hospital accompanies him wherever he goes. There are even persistent rumours that he is electronically connected to a hospital in Cleveland, Ohio, which constantly monitors his bodily functions via cyberspace.

In Fahd’s absence, the day-to-day running of the Saudi government has been handled by his half-brother, Crown Prince Abdullah. But Abdullah himself, though apparently fit, is 75. What’s more, there is no certainty that he would automatically ascend to the throne in the event of Fahd’s death. Power in the kingdom rests in the hands of the seven Sudeiri brothers, a tightly knit family within the larger Saud ruling clan. The founder of the House of Saud, the late King Abdul Aziz, fathered 45 sons by several different wives. The Sudeiri seven are the sons of one of those wives, Hasa alSudeiri. Ever since Abdul Aziz’s death in 1953, they have been slowly gathering the reins of power into their own hands. Fahd is a Sudeiri, as are Defence Minister Sultan, Interior Minister Naif, Riyadh governor Salman and national guard commander

Ahmed. The brothers have been careful to insert their own sons into key positions. Fahd’s son, Mohammed, runs the oil-rich eastern province. Sultan’s son, Bandar, is ambassador to Washington. “But Crown Prince Abdullah is not a Sudeiri,” notes Palestinian writer Said Aburish, author of a critical history of the House of Saud. “So it’s clear that there might well be a tussle for the throne once Fahd is gone. If that happens, it could get very interesting.”

As interesting, perhaps, as the gradual succession process that already appears to be under way in Syria. As his health has deteriorated over the past five years, Assad has been quietly grooming a successor in his son, Bashar, 34, a British-educated ophthalmologist. Originally, it was Bashar’s elder

brother, Bassil, who had been anointed by his father. But that all came to an end on a foggy night in Damascus in 1994, when Bassil was killed in a car accident near the city’s airport. Since then, Bashar has been slowly moving up the ladder. A year ago, he was made a colonel in the Syrian army. Soon after, he took over the Lebanon file, serving as proconsul in charge of managing affairs in the Syrian-controlled neighbouring state. Later this year, the ruling Baath Party is expected to name him to a position in the national leadership, giving him the political clout to match the base created for him in the military.

Despite his familial advantages, Bashar still faces an uphill battle to succeed his father. The divide in Syria is religious. Assad, like virtually all of the ruling hierarchy in the country, is an Alawite, a member of a minority sect detested by most of the Syrian Sunni majority. Led by the wily Assad, the Alawites have managed to hang onto control in Syria through a combination of guile and brute

force. “In that connection,” notes one Damascus-based Western diplomat, “Bashar has yet to prove his mettle. The longer his father stays in power, the better his chances. But it’s really a race against time in view of his father’s deteriorating health.”

For the Palestinians, the dilemma is even more profound. Arafat is clearly approaching the end, no matter how strenuous the official denials. He is finding it increasingly difficult to control the trembling lip and hands, regarded by many as symptoms of Parkinson’s disease. He is as well, to the despair of colleagues, plagued by widening lapses in his attention span. Even Arafat recently hinted that he does not expect to be around much longer than two more years. Yet he has never designated a successor.

At the moment, there are few indications of who might prove strong enough to claim Arafat’s mantle. “I suspect it will be someone local,” speculates Palestinian writer Aburish, author of the most recent Arafat biography, pointing out that the movement is now divided between those who stayed behind in Israeli-occupied Palestine and the “outsiders,” like Arafat, who waged war in exile. Among the so-called locals, veteran negotiator Faisal Husseini, for years Arafat’s representative in Jerusalem, may be a leading contender. In the ugliest scenario, the contest for the leadership might deteriorate into factional infighting between the various Palestinian police forces, throwing up a strongman like Jibril Jibreen Rjoub, chief of the Protective Security Service, Arafat’s notorious “thought police.”

If the future is clouded, however, the present is not. Biology’s unbending rules dictate coming change for the Arab Middle East. Moreover, there is an ancient common thread linking successions in the region. Whether monarchy or republic, institutions do not seem to count for much. It may be no surprise to see Jordan’s King Hussein succeeded by his eldest son. But it is startling to view the same process under way in Syria. And Assad is not alone. Iraq’s Hussein, Libya’s Gadhafi, even Egypt’s Mubarak are all grooming sons for the succession. “It’s hard to escape the conclusion,” says Aburish, “that we are witnessing a return to tribalism.” The question, as in all dynasties, will be whether the son is the equal of the father.

With DAVID HIRST in Beirut

HOSNI MUBARAK Egypt's presi dent, now 71, has ruled for 18 years but has no clear replacement.

HAFEZ ASSAD At 70, Syria's president is in frail health and is grooming his 34-year-old son for the nation's leadership.

KING FAHD The Saudi monarch, 76, suffered a stroke four years ago and may be on his last legs. 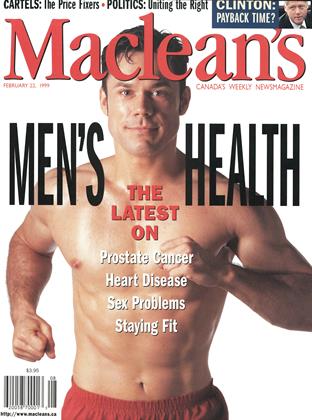