The season of the diva

Cailing all girls. Wondering what to be when you grow up? Have we got a fab career for you! It's called being a diva. That used to be a high-end

term, reserved for Maria Callas and other op eratic megastars who transcended culture and language with big, soaring voices and egos to match.

That night, female pop and rock stars triumphed, taking home a record total of 17 Grammies. Madonna, Lauryn Hill, Celine, Shania, Alanis—they came, they sang, they conquered. And give or take a few fashion miscues, they looked fabulous, darling. No matter what anyone says or sings about female empowerment, looking great is still a major requirement. In fact, if you’re thinking seriously about being a diva, keep in mind one word: outfits.

Ya gotta have outfits. Madonna’s red geishastyle kimono, Celine’s totally classy designer sheath with that net thingy on one side, Lauryn’s rasta hat. And then there was Shania— but more on that later.

The very excellent career news about being

a pop diva is that it’s open to all females, regardless of background, race or age. You can be young and black like the abundantly talented 23-year-old American hip-hop star Lauryn Hill, who walked away with a record (for a woman) five Grammies. Or you can be 40-yearold, here-I-am-again Madonna, indubitably the only single-mom pop star in the world whose work has encompassed selling a sex manual wrapped in plastic to cavorting onstage in a kabuki-like trance, winning for best pop album.

But best of all, in this competitive global market, you can be Canadian. In fact, without Celine Dion, Shania Twain, and Alanis Morissette—a trio of mega-selling talents who took home a total of six awards—the world of pop divadom wouldn’t be half so impressive. (Celine will also receive an International Achievement Award at the Junos on Sunday). Celine, Alanis and Shania. Role models all for prospective divas. What can they tell us about the job? Obviously, you need talent—like that impossibly rich voice of Celine’s, which many of you young girls don’t appreciate. “I just find her really annoying,” you told us in answer to our highly unscientific survey—which pop diva would you like to be?—of any teenage girl we happened to bump into. Listen, if you’re tired of going down with the ship as Celine belts out the syrupy My Heart Will Go On, try her in French, as on her D’eux album, in which she is so much more supple, subtle and genuinely passionate.

Then there is the astoundingly self-confi-

dent Alanis, whose quirky lyrics and snapshot of gender rage in her previous album, Jagged Little Pill, were so compelling it became the best-selling female record ever. That success bought her the creative freedom to go from rage to reconciliation on her new album (not selling so well as the anger, mind you), but nonetheless daring in her Thank U video where she sings naked—what, no outfit?—in the street.

And finally there’s Whose Bed Have Your Boots Been Under Shania, so glamorous and packaged that it somehow takes away from those high-spirited songs. She’s so glossy that some of her country-and-western videos resemble ads for hair colour. “We want to look like her!” you girls said. Until Grammy night that is. She showed up to sing Man, I Feel Like a Woman looking like Barbarella meets Breakfast at Tiffany’s in a skintight, short black dress, thigh-high black boots, long black gloves with dagger-like fringes (so the fringe would be the country effect?), a choker that would restrain a Doberman, and her hair in a ladylike chignon. As Shania herself might have put it, it was “a teasin’ pleasin’ squeezin’ ” kind of look. But you girls thought it was nasty. “Oh well, anyone can make a mistake,” said one of you kindly. Important lesson—even a pop diva can’t let her outfit rule her, she has to rule her outfit.

Enough about fashion sense, how about a diva’s education? Not as necessary as working your tail off at an early age. Celine didn’t even

finish high school, but at 5 she was already belting out songs in her parent’s Charlemagne, Que., bar. Alanis was whipping up lyrics by age 9. Work, work, work, that’s all these divas do.

You can start out poor—Shania grew up in northern Ontario eating mustard sandwiches and Celine is the youngest of 14 children in her struggling family. But you can also be the middle-class child of teachers, as are both Lauryn Hill and Alanis Morissette—arguably the best songwriters.

But let’s get down to business because business is what it’s all about. If you’re a diva, your stats are bandied about as if you were a baseball player (e.g. Celine: $83 million a year, 60 million plus albums sold worldwide). You can bet most record industry execs know the numbers even if they can’t quite recall the tunes.

So what are the rewards of pop divadom? Those CD sales will buy you the same panoply of material goods that male rock stars have racked up. Celine has 500 pairs of shoes and a $15-million Florida mansion complete with fountains and a waterfall (fountains and a waterfall?). Shania bought a massive horse ranch in upstate New York, and Alanis travelled all over the

But let’s not forget the ordinary

touch: When Celine feels depressed she likes to clean out her closets or give her mother and sisters a facial and manicure; Shania has been seen mucking out those stables, and Alanis shares her home with a childhood friend because she wants a roommate. As for the so-called booty (sexual

« perks) well, it’s a bit subdued. While Ala£ nis, 24, is single, two of our three divas— I Celine, 30, and Shania—are married, g Their husbands, heavily involved in their £ careers as either managers or producers, Í are sometimes cynically seen as the Sven3 galis behind the thrones. In fact, cynicism about pop divas is an

occupational hazard. Male record store clerks, for instance, who will forgive Bob Dylan any number of changes of style, will mutter derisively at Alanis’s progress from dance-music bopper to rage rocker to joining Celine as a sound-track siren. But don’t let the cynicism, the brutally hard work, the necessity to look at all times like the millions you’re supposed to be making put you off being a diva. There’s no life like it! One last thing. Do divas have longevity?

Will they last as long as Mick? Hmmm, we’ll have to wait and see. But take note of Lauryn Hill’s exhortation as she bounded up onstage for another award: “Stay firm.” Now that’s advice for the ages. □ world to refresh herself creatively. 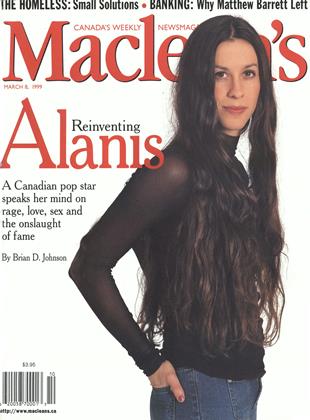