Essays on the Millennium

Click to View Article Pages
Essays on the Millennium

Pilloried from all sides and still short a new president, the public broadcaster is striving to reinvent itself. In TV the makeover may be radical

For Canadians who care about the CBC, there were contrasting images last week. In Hull, Que., president Perrin Beatty and senior executives appeared before the Canadian Radio-television and Telecommunications Commission to make the case for a seven-year renewal of their licences. Their presentations were filled with achievements and

ambitious plans. “We have overcome difficult setbacks,” Beatty said, “and are ready to move on.” But on a personal level, consider Bill Cameron, 56, the well-regarded journalist/anchor of CBC televisions Sunday Report. He will likely leave after 16 years with the CBC following a “final” contract offer that would cut his income by close to a quarter—after five years of salary freezes.

Cameron calls himself “not bitter, but sad. They said they like me—but there isn’t enough money to go around.” After years of budget cuts, no one doubts the CBC is more of a lean fighting machine than it once was. But it is hard to say whether its biggest battles are against others—or within. The debates include the question of who will be the next president (a likely choice is Bob Rabinovitch, 56, a well-connected,

bilingual, ex-senior civil servant now working for Charles Bronfman), worry among many employees that they may face salary cuts or non-renewal of contracts, questions over the main television networks future, and speculation about changes planned for the Newsworld channel. Then, there are recent broadsides from Izzy Asper, chairman of CanWest Global Communications

Corp., and Pierre Karl Péladeau, CEO of Quebecor Inc., who advocate measures that would gut the CBC. Add growing competition from specialty channels and the Internet, and it is no wonder Beatty, in a Maclean’s interview, called the CRTC hearings “a pivotal moment in our history.”

Beatty, a former Progressive Conservative cabinet minister appointed by Prime Minister Jean Chretien four years ago, has been rapped for failing to provide decisive leadership and save the CBC from cuts that took $414 million out of its annual overall budget and eliminated about 3,000 jobs in 1995. But supporters say Beatty deserves credit for trimming bureaucracy and the move to Canadian television content during prime time. Perhaps most important, he pushed to establish CBC online programming, which now receives about 12 million hits a month.

Beatty, who oversaw the strategic plan presented to the CRTC, is leaving in September—after agreeing, at the Prime Minister’s request, to extend his mandate through the hearings. The

plan suggests, among other things, creating six specialty channels and more regional programming of cultural and children’s shows. It also means Beatty’s successor will enter office with key decisions already made. The issue, says a senior CBC executive, “isn’t whether Perrin’s plan is good, but whether someone who is leaving should set the table for his successor.”

The CRTC is certain to grant licences for existing English and French national and regional radio and television services. But it has the power to restrict the amount of advertising CBC television can carry, and limit or eliminate coverage of major sports events. “If our revenue stream is attacked, it will have important ramifications on how we operate,” conceded Ffarold Redekopp, vice-president of CBC English-language television. There is influential support for restrictions. Global’s Asper wants the CBC stripped of public funding—which amounts to $900 million a year—and barred from selling ads. Péladeau, whose company owns the Montreal-based Quatre Saisons network, said the CBC uses tax dollars to “distort” the market in competing for advertising and major sports events.

Those complaints are not new, but are

gathering force. At the hearings, CBC television programming head Slawko Klimkiw said money made by airing pro sports is funnelled to less profitable ventures. “If you kill sports, you don’t help other programming,” he said, “you hurt it.” Ad revenue represents 40 per cent of the English network’s $480-million budget this year. That, CBC officials say, is crucial because since 1995 English TV has received $155 million less a year from Ottawa. After years of losing audience share, CBC-TV’s prime-time audience has stabilized: on most nights, the network draws between 9.5 and 9.8 per cent of Canadian viewers.

Those ratings dwarf Newsworld, which draws about 1.2 per cent of that evening audience. But the network, which marks its 10th anniversary next month, may be the most healthy of CBC entities. With a budget of $56 million, Newsworld has posted surpluses each of the past three years. Seventy-eight per cent of revenue comes from cable subscribers, who pay a mandatory 55 cents monthly to support it. Newsworld has applied for a raise to 63 cents—which would mark the first increase in seven years. Newsworld head Tony Burman unveiled plans for his network to become more

“flexible” by boosting live news coverage while cutting back the talk shows that have dominated in recent years. “We’re going back to our roots: breaking news,” he says.

Changes are under consideration at all levels. One potential measure involves farming out transmission of programs to the private sector, to concentrate on programming. “We want to see if we could do that,” says Redekopp, “while ensuring our shows reach every possible Canadian.” .» There is talk of whether to I turn all television news and I current affairs responsibil1 ity over to Newsworld, Ï which now shares some facilities and personnel with the main network. “Any option making us more efficient is possible,” Redekopp says, ffe and other officials foresee a day—not soon, he stresses— when the main CBC network might cease to exist, and be replaced by a series of specialty channels.

Those debates will have a profound impact on the CBC of tomorrow—but do not address morale problems today. In the wake of budget cuts and a sixweek technicians’ strike earlier this year, one veteran journalist says the only uniting factors now “are uncertainty and unhappiness.” Cameron is a case in point. Erudite and even-tempered, he has long been a fixture on programs from The Journal to Sunday Report, and is characterized by a colleague as “an exceptional team player for an on-air guy.” Redekopp says Cameron is valued: “We really would like to keep him.”

But Camerons unhappiness goes beyond money. He says “the standard of excellence the CBC set for itself fails more often now than it should.” Barring a last-second resolution, he will leave when his contract expires in August. Now, Cameron adds: “What’s necessary is for CBC to re-invent itself.” That is one thing he and the people who may soon be his ex-employers agree upon. EÛ3 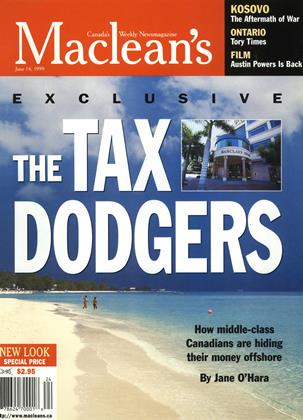