Less than a kilometre away from where Canadian troops kept them under high-tech surveillance, obstructive Russian troops were engaged in the most serious eyeball-to-eyeball stand-off between Moscow’s and NATO’s forces for half a century.

In a nearby ethnic Albanian village, survivors told of a gruesome massacre by Serb forces. Everywhere were signs of the human tragedy caused by the conflict in Kosovo. As they passed their first week in the tortured Yugoslav province, Canadian peacekeepers had quickly become immersed in the tricky and often heart-wrenching complexities of ending a messy Balkan war.

It was a time of sweeping drama and ugly revelation. Ignoring aid workers’ pleas that the country wasn’t ready for them, thousands of ethnic Albanians streamed out of the camps in Albania and Macedonia to try to retake their homes—or anything left of them—in Kosovo. At the same time, fearing reprisals from members of the Kosovo Liberation Army— most of whom had yet to be disarmed by NATO forces as they gradually took control of the province—thousands of Serbian residents joined a new refugee cavalcade fleeing north into Serbia proper. Across Kosovo, troops and investigators kept discovering more evidence of mass graves and atrocities— even an apparent torture chamber in a Pristina police station—leading NATO officials to estimate that more than 10,000 ethnic Albanians may have been murdered during the alliance’s 10-week bombing campaign.

And then there were the Russians. Magura village, on the edge of Kosovo’s main airport, outside Pristina, became the focus of their tense brinkmanship with NATO, and the 184

Canadian soldiers of the reconnaissance squadron of the Edmonton-based Lord Strathcona’s Horse Regiment were right in the thick of it.

The drama had begun on, June 12, after Russian troops dashed south through Serbia from their base in Bosnia and managed to seize Slatina airport just hours before the first units of British paratroopers were due in the capital. The British had been ready to move the day before, but were ultimately ordered to stand down and avoid confrontation with the Russians (U.S. and British officials last week each insisted the other country was responsible for the decision). The next day, units of the Irish guards, joined by a Canadian armoured personnel carrier, moved within metres of the Russian airborne unit that was blocking the airport approach road with its own armoured vehicles. But the unit’s commander, Capt. Nikolai (who refused to reveal his last name), stood his ground and the Canadian and British troops withdrew to about 800 m away.

Setting up base among the ruins of ethnic Albanian homes destroyed in the year-long war between separatist rebels and the Yugoslav army, the Canadians kept a wary eye on the Russians

with high-tech radar equipment. “We are the ears and eyes of the British Fourth Armoured Brigade,” said Warrant Officer Robert Swainsbury, referring to the British unit they are supporting. His Coyote armoured reconnaissance vehicles were also monitoring the retreat from Kosovo of Yugoslav army forces, due to be completed early this week.

The Canadian radar, backed by thermal cameras, can spot “mice walking in the desert,” explained Swainsbury, an Edmontonian. Last week, the cameras caught the Russians digging trenches in breach of an agreement they had made with KFOR—the NATO-led security force in Kosovo. Their movements were videotaped and dispatched by motorcycle to NATO commanders who confronted the Russians with the evidence.

As the days wore on, however, tensions eased. The 200 or so Russians felt increasingly isolated and bored holding an empty airfield. “The British and Canadians are our friends,” declared Capt. Nikolai. On Friday, Russia and U.S. negotiators in Helsinki finally agreed on Moscow’s role in patrolling Kosovo. The Russians had wanted their own sector, but will instead send up to 3,600 troops to three of the five NATO-controlled sectors. The soldiers will report to their own officers who in turn will work with the NATO command. The airport, at last, was to be opened to all peacekeeping forces. Leaders of the Group of Eight, including Russia, then began haggling in Cologne, Germany, over whether to give reconstruction aid to a recalcitrant Serbia.

For the Canadians in Magura, the trouble with the Russians contrasted with the warmth from the few ethnic Albanians who had stayed in the area despite Serbian attacks

224 in which bombs were dropped 158 targets hit

and the long weeks of NATO bombing, much of it aimed at the airfield. “The Albanians love us here,” said Swainsbury. “They’re happy to see us and get on with their lives. They’ve nothing to give us except flowers.” Life is not all hardship for the Canadian unit—they have rigged up a shower to put water back into an empty swimming pool, which still had its polo nets. Cpl. Clifton Coffin from Montreal, a driver with the reconnaissance unit, was playing a game of euchre as the group waited for orders for their next mission. “We’ll be home before Christmas— I don’t want to miss another one,” said Coffin, who has just done a tour of peacekeeping duties in Bosnia. “My wife was beside herself —we’ve been married for 13 years.”

The Canadians admit they have been moved by what they have experienced so far. “It’s not the shooting or the bombs, but the misery you encounter,” said Coffin, explaining how members of his unit came across an elderly woman, crying, bleeding and dying from cervical cancer. They also encountered an old man, too weak to flee with his family. “What do you do?” asked the corporal.

Even worse is dealing with evidence of massacres. Coffin described how some ethnic Albanians told them about a mass grave in a village just a few kilometres away. “We reported it to headquarters and they will investigate,” he said. “It hurts inside,” Coffin added. “After Bosnia, some guys returned to Canada with post-traumatic stress syndrome.” Among the many reports of butchery last

NATO officials estimated that 10,000 ethnic Albanians may have been murdered

week was one supplied by a handful of survivors in the nearby village of Halec. A row of fine white-brick villas—since torched by Serbian forces—demonstrated the wealth generated by the local flour mill. Much of that money also went into funding the rebel KLA, and some of the villagers had joined its ranks. According to the survivors, Serbian paramilitary forces surrounded Halec on April 19, the same day a military sweep was conducted through much of central Kosovo. The paramilitaries rounded up about 50 men and then called out 20 names.

Becher Ásllami watched as they were led off. “Why wasn’t I chosen?” he still wonders. Shots rang out from three separate locations nearby. Bechers cousin, Shefki Asllami, said he was among a group of 13 lined up against the wall of a barn. “One by one they called out our names and fired a single shot,” he said. One of Bechers brothers was the first to be killed. Shefki says he was shot through the shoulder—he bears a scar there—and feigned death. When the Serbs left, he crawled to safety.

The last victim was an 18-year-old girl, Nadire Buzuku. According to Becher, she

ran to the body of her executed father, “like a good daughter would,” and was also shot. Villagers described how the paramilitaries then ordered local gypsies to bury all the corpses by the barn. “We could not even give them a decent burial,” complained Becher. Then, inexplicably, soldiers returned some days later and ordered that the bodies be exhumed. Villagers said the corpses were taken to Pristina’s morgue, autopsied and then brought back to Halec where soldiers ordered them to be reburied in the village cemetery. And there they lie today—20 mounds of earth with posies of flowers placed there by little girls, mourning their fathers.

As the villagers described the events, children gathered to listen. “They have seen and heard everything—there’s no point telling them to go away,” said Emina, one of the matriarchs of the clan. Few in Halec believe Serbs and Albanians can live together again after what happened. Emina, though, said she regrets seeing the thousands of Serbs fleeing Kosovo along with their retreating army and police. “Let the Serbs stay,” she said. “And then they can suffer like we did.” ES]

TîlC Serbian View The independent Belgrade newsweekly NIN last week conducted an opinion poll among Serbs about the outcome of the war. Among results:

Who won: NATO or Serbia?

Do you agree with the peace settlement accepted by Yugoslavia?

Do you believe that Serbs 46% committed war crimes in Kosovo?

Can Serbs and Albanians live together after the war?

Totals do not reach 100 per cent because “Don’t know” responses are not included. 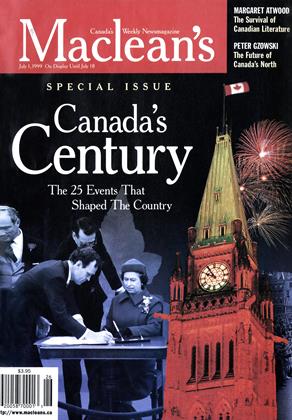