They appeared suddenly at dawn one day last week, materializing in the early morning mists blanketing the marshlands of northern Kent. Local police, summoned by alarmed residents of the county in southeastern England, first discovered a bedraggled band of 30 wandering along an isolated, hedge-rimmed lane, then encountered dozens of others in surrounding fields. Within hours, 116 people had been taken into custody, including 47 children, 16 of whom were unaccompanied by any adults. “They all claimed to be Albanian refugees from Kosovo,” a spokesman for the Kent police force later recalled. “We are keeping an open mind about how they reached this country, but we are pretty certain that they were smuggled in, either by boat or in the back of cross-Channel freight lorries.” The Kosovars themselves were not talking. But their unheralded arrival set off alarms in government offices in London. The refugees amounted to the largest single group of illegal immigrants ever smuggled into Britain.

The world’s displaced The top five sources of refugees outside their own borders, as of Jan. 1

What is more, they are part of a swelling wave of refugees from unhappier lands that is washing up with increasing frequency upon European shores. In Britain, 46,000 people have claimed asylum in the past year. In June alone, a record 6,230 arrived, more than double the previous June. Only hours before police stumbled upon the Kosovars in Kent, Immigration Minister Barbara Roche had appeared on Czech television to threaten the reimposition of visas for Czech nationals in an effort to curb rising illegal immigration from the central European state consisting almost entirely of Roma, more commonly known as Gypsies.

Much the same is happening in affluent countries across Europe, all of which offer havens to refugees, although with varying rules. Late last year, Britain, Ireland, Finland and Norway restored visa requirements for Slovakians as a direct result of a huge influx of Slovakian Roma. Similarly, the Italian government has since the beginning of July been faced with a seaborne invasion across the Adriatic of more than 2,000 Roma from Kosovo and Albania. German authorities have mounted armed patrols and erected kilometres of barbed-wire fencing to police two key routes into the country—the road north from Prague and a highway running west from Poland— which are favoured by Roma and other displaced or disadvantaged peoples.

The traffic in illegal immigrants is, according to Ann Widdecombe, the British Conservative party’s shadow home secretary, “an organized racket.” Police in the English Channel ports of northern France have arrested 137 smugglers this year, almost all of them

associated with Europe’s extensive Albanian underworld. They operate by selling prospective asylum seekers in Britain a place in the back of one of the thousands of long-distance trucks that daily cross the Channel, either by ferry or by rail through the Chunnel. Prices vary, from as low as $ 120 to more than $1,000 per trip. Some drivers are bribed, some have their locks picked. But the problem has proved difficult to control. “When we arrest someone,” complained Daniel Cadoux, prefect of police in Calais, “it is not long before another smuggler comes along to take his place. I am waging war with these people, but it is clear that the big bosses are in Paris and elsewhere.”

One reason why migrant flows are so difficult to curtail is the sheer scale of the problem. According to the UN high commissioner for refugees, there were 21.5 million refugees in the world on Jan. 1, 1999—that is, one of out every 280 people on the planet. The UN classes another 30 million as displaced persons within their own countries, which means that more than 50 million people may have been forced to flee their homes.

Fearing more pressure on their borders, several European governments are bringing in further controls. British authorities, emulating recent German legislation, have drafted new rules that will deprive asylum seekers of automatic access to social security benefits, providing instead a less attractive system of food and clothing vouchers. After Germany passed its law last year, it managed to cut the number of asylum seekers by 75 per cent. The British clearly hope to discourage further unwelcome newcomers from appearing on Kent’s rural byways. EH1 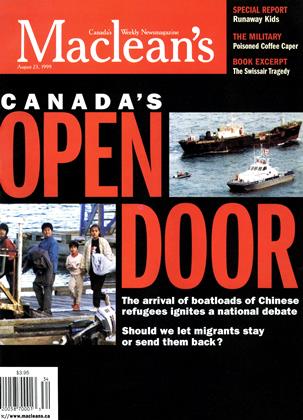