Tom Fontana surveys the Rocky Mountains as he sits on the patio of the luxurious Banff Springs Hotel. To the creator of some of the most critically acclaimed series to appear on North American television in the last decade, there is no drama in the stunning setting—at least not of the sort that interests him. Fontana finds inspiration in turmoil and writes from the gut. When he creates characters, he asks himself three questions: What do they think? What do they feel? And who do they want to fornicate with? “In America, at least, we want our TV to lie to us,” he says. “I think writers in TV face this dilemma every single time they write. Do I lie or do I tell the truth? Do I deal with an issue in all its complexity or do I just make it seem easy? Can I give a

character alcoholism and have him face it and be free of it in 46 minutes?”

In his 18 years in the business, Fontana has learned to pack more into an hour-long program (46 minutes is what’s left after the commercials and credits have run) than just about any producer in television. Some would say too much. His shows, NBC’s Homicide: Life on the Street and HBO’s Oz, portray the raw, unseemly side of the United States. At times, they are so realistically violent that they are almost unwatchable. Fontana’s uncompromising vision has won him an Emmy Award, two Writers’ Guild Awards, three Peabody Awards, four Television Critics Awards and three CableAce Awards. Only Hill Street Blues creator Steven Bochco and David E. Kelley, the man behind Ally

McBeal, have had as great an impact on the types of programs viewers get to watch. But while both those producers show humanity struggling to be noble in a flawed world, the 48-year-old Fontana holds up the dramatic equivalent of a bare lightbulb and exposes its squirming vices.

It is an approach that has worked well on Fontana’s prison series Oz, which began airing in 1997. Set in the fictional maximum security Oswald State Correctional Facility, Oz depicts life on the inside as a malignant petri dish infested with rapists, murderers and child molesters and pocked by such evils as gang rape, cannibalism, torture and murder. Shows that stage homosexual gang rapes aren’t supposed to be ratings winners. Nevertheless, Oz is the No. 1 rated

series on Showcase, drawing 200,000 viewers every Friday night, four times the cable networks average audience. “Initially, there were some reservations from our sales department,” says Showcase vice-president of programming Laura Michalchyshyn. “But the fact Tom Fontana is not afraid to deal with issues that aren’t as viewer-friendly has won him a loyal audience.” He is also an industry darling. At June’s Banff Television Festival, the world’s largest TV industry gathering, Fontana was treated like a guru, with TV executives clamouring after him incessantly.

Success in television is not something Fontana necessarily had in mind. He grew up in Buffalo, N. Y., and studied theatre at Buffalo State College. He began his career in New York City, toiling off Broadway, as he puts it, as a “wildly unsuccessful playwright.” But in 1981,

producer Bruce Paltrow offered him a writing job on his NBC drama series St. Elsewhere, whose ensemble cast of young doctors working at a fictional hospital included such future stars as Denzel Washington and Howie Mandel. The then-30-year-old playwright thought it would be short term and easy money. Instead, he stayed until 1988. While writing for St. Elsewhere, Fontana began to see television’s strength as a medium. Like stage actors, the cast in a TV series play the same roles for an extended period of time.

But unlike their theatre counterparts, TV actors always work with a new script. “He never throws anything he learns away—an idea, a piece of paper, anything,” says Chicago Hope creator John Tinker, who worked with Fontana on St. Elsewhere. “Now, he’s willing to explore what he has discovered and get his psyche dirty.”

Viewers got their first glimpse into his dirty psyche when Homicide aired in 1993 and became Fontana’s breakout series. Based on Homicide: A Year on the Killing Streets, a 1991 book by exBaltimore Sun reporter David Simon, it followed a team of Baltimore detectives as they hunted killers in a city known for the Orioles, crab cakes and crack houses. Fontana partnered with film director Barry Levinson (Rain Man, Diner), who acted as co-executive producer, and wrote many episodes while overseeing an eclectic pool of writers, which included a rarity for a cop show— three women.

Dramatically, Fontana used the detectives’ murder investigations as a way of refracting the meaning of life. This central conceit produced sublime television. In one of the series’ most accomplished episodes, guest star Vincent D’Onofrio gave a gripping performance as a man whose legs are trapped between a subway train and a platform. The show won Homicide its third Peabody Award, TV’s most prestigious honour. Although Homicide had some of television’s most intensely loyal viewers, it never rose above being a cult hit and teetered on the brink of cancellation for most of its six years. NBC finally axed Homicide last spring.

Oz picks up the narrative begun by Homicide, and it is on Oz that Fontana most adroitly employs his ability to create fully formed dramatic universes. Oz

has its own hierarchy, twisted moral code, heaven and hell. More important, there are no clichés, no wrongfully convicted inmates. “These people deserve to be here,” says Fontana. “I take the stereotypes and keep flipping them.” The show, which has an eight-episode season, is taped in New York City on a shoestring budget. “Tom says you have everything at your disposal, ” says Terry Kinney, who plays Oz administrator Tim McManus and directed an episode this season. “Except time and money.” Unlike most mainstream shows, which portray a lily-white version of the United States, Oz is a multicultural microcosm of American society. While there are no established stars among its ensemble cast, some of the most talented black and Hispanic actors in the United States are show regulars. Many even take pay cuts to act in Ozs dramatically challenging world. Feedback from viewers, who admire the show’s realism, can be startling. “I’ve been stopped in the street by former inmates who watched Oz while they were inside,” says Kinney. “They say they wish they had a warden like me. I met one woman in Chicago who felt that the show was keeping her son away from a life of crime.”

This spring, Fontana made a departure from the realm of crime drama. He was executive producer for The Hoop Life, a dramatic series set in the highprofile and decadent world of professional basketball. The Hoop Life, which was shot in Toronto but so far has aired only in the United States, followed the careers of five players, from a teenage rookie to an aging veteran, through a season. And now, Fontana is shooting The Beat, a series for the American cable network UPN that follows two uniformed New York City cops as they make routine calls. The Beat promises to continue Fontana’s jaundiced view of American society and buck the standard shoot-’em-up police format. “If you don’t want to watch my shows, that’s great, watch Touched by an Angel,” he says. “I don’t have the answers. My hope is to raise questions. I give my audience credit. They don’t want the lie.” E3 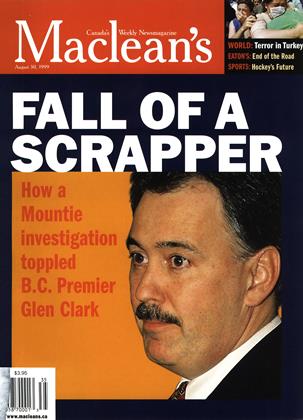