For many in the RCMP, British Columbia has a special significance. With nearly 5,200 officers on duty, almost a third of the entire force, it is the largest RCMP contingent in the country, the place where young up-and-comers have routinely gone to earn their spurs under contracts with the provincial and municipal governments. But in an age of progressive cuts in the police budget, the Mounties’ huge numbers in British Columbia are also producing disproportionately huge headaches. In a series of interviews with Macleans, senior officers have said, among other things, that they do not have the resources to undertake certain murder investigations even when they have a serious suspect in mind; they have not been able to follow up fully on five killings, some possibly serial, in the Prince George area (though a suspect is in jail on another charge); and, until recently, they have not had the trained personnel to help boaters on Stuart Lake even though the detachment is right on the lake.

Indeed, the Mounties’ straitened circumstances in British Columbia are such that they have not escaped judicial notice. Earlier this year, Supreme Court Judge Glen Parrett, one of

the most respected judges in the province—and someone noted for his normally quiet demeanour—threw a judicial tantrum in the middle of a criminal trial in Prince George that was heard all the way in Victoria. What provoked him? In the trial of Crystal Dianne Henricks, who was facing eight charges for sexual confinement and torture, one crucial piece of evidence that ultimately resulted in her conviction— her diary—was almost not introduced. Because of financial cutbacks the Crown and, more importantly, the investigating RCMP had not had time or the personnel to read it until the trial was in its 13th day.

That prompted Parrett to lash out—not at the police directly, but at an underfunded system that allowed them to twist in the wind. “The justice system, generally, is under considerable pressure and attack for defects that people seem to see in this system,” he said. “These courts and this system are attacked by the media and the public without a single reference to the budgetary restraints that are being imposed and that are often preventing it from operating the way it should.”

The problem is not unique to the West Coast. The Cana-

dian Centre for Justice Statistics released figures last week that showed the workload for police officers across Canada has more than doubled in 36 years while the number of police per capita has dropped for the seventh straight year. But in British Columbia, where the RCMP provides the bulk of police services, the situation is particularly acute. “Cutbacks in financing from the federal government are killing us,” says RCMP Supt. Michael Morris, who is responsible for policing in the northern two-thirds of British Columbia. Compounding the problem is that the Mounties, to maintain their presence, tend to underbid other contenders for municipal contracts, which means they start off lower-staffed and overworked.

Ujjal Dosanjh, British Columbia’s attorney general, is blunt about the problem. “There is no question there is underfunding and that it is affecting public safety,” Dosanjh says. “That has become very clear to me.” He hopes to meet with the newly appointed federal solicitor general, Lawrence MacAulay, later this month to seek more federal money and officers. “In the past, I’ve talked about setting up our own provincial police force. I’ve stopped talking about it now because it creates an air of instability,” says Dosanjh. “But if Ottawa can’t solve the problem, then all avenues are open to me.”

According to the latest numbers, there are currently 298 vacant RCMP positions in British Columbia, and while replacements have been promised by Ottawa and will begin trickling in this fall at the rate of about 25 a month, it will still not be enough to account for retirement and attrition. On top of this, about 210 Mounties are off work due to maternity, illness or suspension. And the B.C. contingent is being forced to absorb the costs of about $4 million in overspending from previous years as well as a pay raise for members in 1999.

The upshot: individual Mounties in British Columbia are carrying between 80 and 180 criminal cases a year, Morris says, compared to the national average of 44.5. Investigations are falling by the wayside: since the late 1980s, there have been five unsolved murders in the Prince George area, with at least two of those believed to be the work of a killer who operated along the Yellowhead Highway between Prince George and Prince Rupert and maybe as far east as Edmonton. “It’s getting so bad here,” says Prince George-based Staff Sgt. Glen McRae, “that criminals are taunting us. Serious frauds are not being investigated. I’ve been in situations in restaurants where people who I know have committed a murder sit across the room and make faces at us, because they know we don’t have the $30,000 we need to go after them.” In some isolated areas, where officers tend to be stationed for

two or three years, criminals are using the legal aid system to stall long enough until Mounties with crucial testimony are transferred. “They know that we don’t have enough money to send these officers back for a trial,” says McRae.

The situation is so desperate that some Mounties are actively soliciting donations from private citizens to fund undercover operations and other investigations. “In many cases, the wealthy people in a community say ‘We’ll buck up with the money,’ ” says McRae. “But that’s not right. It puts the force in a real dilemma of following someone else’s priorities. But Ottawa and some of our own brass see nothing wrong with that.” Sgt. Bob Frederick, who runs an RCMP detachment at Fort St. James, says priorities were, until just this summer, skewed to the point where each officer was being required to take a four-day course on violence in relationships, but there was no money to train members how to operate a boat. “We are located on a large lake,” Frederick says. “If someone was drowning or had drowned, we couldn’t send a boat out to help. Nobody was qualified.”

The RCMP s largest detachment in British Columbia— and in Canada—is in the Vancouver suburb of Surrey, where the force is under contract to provide 371 municipal police officers. Surrey pays $39 million annually for the service, and the federal government subsidizes the remaining 10 per cent of the cost. But the RCMP contingent is currently 33 officers short, and there is no hope of significant replacements in the near future. “The RCMP shut down its training academy in Regina last year because it didn’t have the budget,” Surrey Mayor Doug McCallum said in an interview. “They’re now

putting a few troops through but there won’t be enough trained for Surrey until well into next year. This puts us in a very awkward situation. We’ve got a major problem with the RCMP right now. There is not enough manpower—we’re burning out individuals.” McCallum says that the situation has prompted Surrey to study the possibility of setting up its own municipal police force—leaving the RCMP to concentrate solely on federal policing in the area.

In Ottawa, meanwhile, the first report of a $1-million study of RCMP capabilities by the accounting firm PricewaterhouseCoopers (Canada) was delivered to the government in May, but its preliminary findings have not been made public. A final report is due in September. But whatever the accountants recommend, they will still have to adjust to the realities on the ground where caseloads continue to increase, where young Mounties are routinely transferred in and out of remote communities and where the RCMP, to maintain its Western base, continues to put pressure on itself by bidding low on provincial and municipal contracts. “Our complaints are not a comment on the dedication of individual RCMP officers,” stresses Dosanjh. “We love these guys.” No doubt that is the popular sentiment. But you get what you pay for. And as one staff sergeant puts it: “The brass hasn’t awakened to the fact yet that the federal government seems determined to strangle the RCMP to death, and that if we are to survive we can’t, for the sake of the institution, continue to co-operate in our own murder.” Eli] 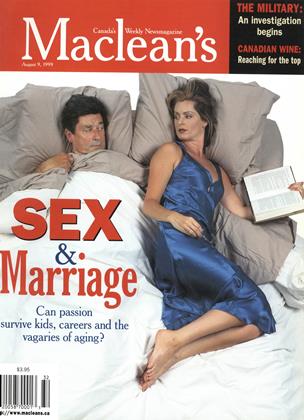