It is after midnight at a crowded party for the world première of American Beauty. The movie s star, Kevin Spacey, sits at a table stoking a gigantic cigar. And all evening, starstruck fans are walking up to a woman who looks a lot like his co-star, Annette Bening, and telling her, “I love your work,” or things to that effect. The woman is not Annette Bening, who cancelled her trip to the Toronto International Film Festival at the last minute because she is pregnant with Warren Beatty’s fourth child. No, the woman is CBC Newsworld anchor Carole MacNeil. At first, MacNeil was flattered by the attention, but by the end of the night, her faux stardom is wearing thin. “People light up when they see me,” she says, “and then there’s this look of disappointment when they realize I’m not her.”

The beauty of being Annette Bening is this: American Beauty was one of the most talked-about films at a festival that premièred a surprising number of movies that will continue to be talked about in the coming months—all the way up to Oscar time. After a summer of boring blockbusters, the festival set the pace for a fall season of more substantial fare. With 319 films showing from 31 countries, movie madness took over the city last week, with dozens of stars, from Bruce Willis to Susan Sarandon, parading through the paparazzi zoo of red carpet premières and swish parties.

Sex is a persistent theme in this seasons films, ranging from the cheerleader transgressions of American Beauty to the interracial infatuations of Black and White—not to mention some taboo-breaking fare from Europe that blurs the line between pornography and mainstream cinema. The Holocaust also casts an indelible shadow, in dramas such as Jakob the Liar and Sunshine, and in two groundbreaking documentaries, The Specialist and Mr. Death: The Rise and Fall of Fred A. Leuchter, Jr. Finally, in an industry of shifting demographics, youth asserts itself more strongly, and seriously, than ever. Showing that they have more to offer than inane teen comedies, a new generation of hot young actors are poised on the brink of stardom—names such as Tobey Maguire, Sarah Polley, Molly Parker, Jason Lee, Thora Birch, Mena Suvari and Natalie Portman.

where youth and beauty collide with middle-aged delusion. A first feature made with astonishing confidence by Broadway stage director Sam Mendes ( The Blue Room, Cabaret), it begins as a mordant satire of American suburbia that slowly strips away all cynicism to reveal a drama of uncanny insight. In an Oscar-worthy performance, Spacey plays Lester, a magazine writer staring down a mid-life crisis, while Bening portrays his wife, Carolyn, a manic real estate agent obsessed with status. Lester quits his job, buys pot from the boy next door and horrifies his teenage daughter (Thora Birch) by developing a wildly inappropriate crush on her friend (Mena Suvari), a blond cheerleader who cheers him on.

The picture is a lavishly entertaining comedy that turns out to be smarter than it first appears. As a woman in American I Dream overdrive, Bening never quite escapes her cartoonish

1 stereotype. But for Spacey, who carved a career out of sarcasm ^ in such films as The Usual Suspects and LA. Confidential, the 6 movie marks a breakthrough. “I just turned 40 this summer,”

2 he says. “And the whole experience of doing this film was about

wanting to be perceived differendy as an actor. From the industry, there’s a feeling that they want you the way they discovered you. I did a series of roles that were very dark and mysterious and slippery. They were fantastic parts. But this kind of thing is much closer to my experience.” The heart of any family satire is a scene of hysteria at the family dinner table. American Beauty has one. And so does Black and White, which takes a breathtaking punch at the solar plexus of urban America. Written and directed by James Toback (Two Girls and a Guy), it opens with an interracial threesome having sex while leaning against a tree in Central Park—then cuts to the dinner table of a bourgeois home, where one of the lovers, a blond teenager involved with a black gangster, breezes in late, explaining she was at the “liberry.” The casting is wonderfully perverse. Model Claudia Schiffer plays a black basketball players girlfriend who trades up with a Darwinian sangfroid. Brooke Shields shows up as a shallow journalist shooting a documentary about white kids enamoured with hip-hop culture. And in a jaw-dropping cameo, boxer Mike Tyson performs a scene with Robert Downey Jr. that stands as one of the strangest improvisations ever filmed. Downey, cast as an irrepressible queen, keeps hitting on Tyson, who plays himself—until the boxer finally explodes, slapping him, choking him and pushing him to the floor. Both he and Tyson were on parole at the time.

Toback says the boxer had no idea what was coming when they shot the scene. “I told Robert to hit on Mike relentlessly until he responds,” the director recalls. “Downey said, ‘What if he kills me?’ I said, ‘It will be a great way to go.’ ” Downey, in fact, briefly blacked out during the scene. “When I cooked up the idea for Black and White? adds Toback, “I thought of Downey and Tyson as my two leads. I didn’t know what the movie was.” Too bad he did not stick to his original concept. Downey’s acting gets more interesting every time he is let out of jail on drug charges, and Tyson’s cameo is unforgettable.

Ride with the Devil dramatizes gang culture of a different colour: the guerrilla banditry of the American Civil War. The story focuses on two young men, played by Tobey

Maguire and Skeet Ulrich, who are Fighting for the Bushwackers, a band of non-uniformed marauders raiding Union troops in Missouri. Taiwanese director Ang Lee—who explored Jane Austens England in Sense and Sensibility and Seventies America in The Ice Storm— shows once again that he has an uncanny ability to frame a time and place far beyond his own experience.

Ride with the Devil is both a war movie and a western, and Lee redefines both genres with striking originality. As a western, it is the most radical reinvention of the genre since Unforgiven. Lee has crafted an intimate epic, punctuated by scenes of spectacular and chaotic violence, but mostly made up of long stretches of extraordinary dialogue among the young men who are living as outcasts in their own land. James Schamuss elegant script re-creates the archaic voice of the South with an almost Shakespearean cadence. This is a drama about outlaw civility in civil war, and an adventure about horses, mud and gangrene. Of course, there is a woman in the thick of it, played by the pop star Jewel. She is no Mike Tyson. But she is surprisingly credible as the homespun farm girl who asks Maguires character if he is still a virgin. (Nonplussed, he replies: “Eve killed 15 men.”) With his performance in Ride with the Devil, Maguire shows that he may well be The Next Big Thing. He may not have the terminal cuteness of his friend Leonardo DiCaprio—the actor studio executives originally wanted for the role before Lee found a new studio—but he conveys an irresistible honesty on-screen. As the guileless Everyman, he is like a young Tom Hanks. Lee, who also cast him in The Ice Storm, says: “There’s something about him that’s innocent and sincere. A composer would want to use a clarinet as his instrument. And he believes in what he’s doing. Not many actors believe in what they’re doing.”

Maguire also makes an impact in The Cider House Rules, the long-awaited

adaptation of John Irving’s 1985 novel. Again, he plays a heroic naïf, a wideeyed lad named Homer who has grown up in a remote orphanage, and without formal medical training, learned to deliver babies under the tutelage of its kindly director (Michael Caine). Set in the 1940s, Irving’s odyssey takes Homer from the orphanage to an apple farm, where he falls in love with a woman (Charlize Theron) whose boyfriend is fighting overseas.

Plans to film The Cider House Rules were passed down through three directors—including the late Canadian filmmaker Phillip Borsos (The Grey Fox)—until Sweden’s Lasse Hallstrom finally brought Irving’s script to the screen. The result is a slow-paced but handsomely crafted piece of oldfashioned storytelling, in which applecheeked sentiment is undercut by a bold exploration of abortion.

Meanwhile, Woody Allen has tried to put some new spring in his step with Sweet and Lowdown. Like Zelig ( 1983), it is a comic biography of a fictional character, in this case a legendary jazz guitarist played by Sean Penn. The movie comes as a welcome tonic after the sordid self-parody of Allen’s recent work. Penn’s character is clearly a surrogate for Allen, the misunderstood, clarinet-tooting artiste. But unlike so many others before him, Penn does not fall into the trap of imitating the director’s mannerisms. He gives a masterful performance, proving that even in the most whimsical piece of fluff he is the most substantial actor of his generation.

from British writer-director Justin Kerrigan, takes an exhilarating ride through rave culture. Following a gang of ecstasy-popping friends through one night of partying in Cardiff, it is a carnival of witty asides, fantasy sequences, stoned rants and inventive visuals. Human Traffic is this year’s Trainspotting, but without the nasty bits.

On a darker note, British director Mike Figgis (Leaving Las Vegas) returns to the theme of obsessive self-destruction in a Fine-tuned adaptation of August Strindberg’s Miss Julie. Peter Mullan and Saffron Burrows create exquisite friction as the footman and the lady who break class lines. Meanwhile, British actor Tim Roth makes a powerful directing debut with The War Zone, a harrowing tale of father-daughter incest on the Devon coast.

Roth’s movie includes a graphic scene of the father sodomizing the daughter—which prompted one man in the audience at the première to scream, “Is this really necessary?” then walk out. Roth, who spent an hour answering questions afterward, insisted it was. He said victims of incest who have seen the film have said they would have walked out if he had not shown the crime.

Explicit portrayals of sexuality onscreen seem to be on the rise. The taboo against showing erections is broken in Italy’s La donna lupo, and in Romance, from French director Catherine Breillat—which will be one of the first commercially distributed movies in North America with extensive hard-core footage. But there is nothing pornographic about A Pornographic Affair, from Belgium’s Frédéric Fonteyene. It is the best kind of romance, an enthralling story of two strangers who meet every week for an unnamed sexual fantasy and are slowly overtaken by the reality of love. It is a Last Tango in Paris for grown-ups in the ’90s, a movie where nothing exists outside the café and the hotel room where they meet—a movie that leaves the world behind. EJ 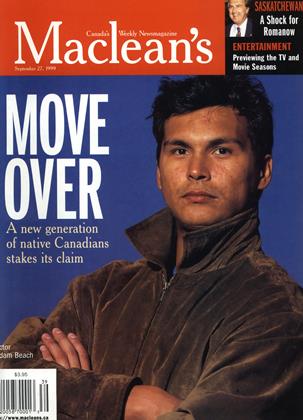