Inside a temporary building on the University of Guelph campus, 60 km west of Toronto, about 20 closely watched white pigs live in strict isolation. “These pigs,” says Danny Butler, a professor of veterinarian medicine,

“cannot be allowed to enter the food chain, or have any contact with other pigs.” The reason: they carry a human gene, one that could enable doctors to transplant pigs’ hearts and other organs into humans without triggering massive rejection. Developed by British-based Imutran Ltd., a subsidiary of biotechnology giant Novartis, the animals are part of a wave of research that promises to make animal parts, as well as laboratory-produced skin, blood vessels and organs, routinely available for human use within a few decades.

With half a dozen U.S. and British firms in the field, the first attempt to transplant a pig’s organ—probably a kidney—into a human could occur within a year or so. But first, scientists—including experts working for Imutran in London, Ont., and Toronto—will have to show that animal transplants are not going to expose humans to new diseases. “Regulators will have to be satisfied,” says Buder, “that there is no risk of infection by animal viruses or bacteria. ” Researchers working in the new field of bioengineering are pursuing a different approach to developing spare parts for humans. Their goal is to create a supply of human tissues for burn, injury and disease victims, as well as organs for transplantation to deal with the chronic shortage. Last month, researchers at the University of Ottawa Eye Institute unveiled a bioengineered replacement for the human cornea—the eyes transparent external covering—that could be ready for use within a decade. Led by cell biologist May Griffith, the Ottawa team fashioned the cornea by growing human cells in a culture, then layering them over a biodegradable scaffolding. Before the device can be tested in humans, says Griffith, “we have to make it stronger—its too fragile right now” Using similar techniques, University of Toronto researchers are trying to develop skin and bone substitutes—and plan-

ning how to construct entire organs. Bone substitutes made from titanium alloys, coral and other materials are already used in dentistry and to repair damaged hips and knees. But they all have drawbacks, says U of T bioengineer John Davies. He has developed an approach in which a biodegradable foam provides a medium for natural bone regeneration—supplemented by bone marrow cells that have the capacity to form new bone. Human trials could begin within a year.

Michael Sefton, another Uof T researcher, is behind a more audacious plan— for a bioengineered human heart. According to Sefton, about 60 scientists support the proposed $5-billion, 10-year project dubbed the Life Initiative. They are currently trying to win U.S. and Canadian government backing. The researchers would first try to develop a bioengineered heart valve by seeding muscle cells onto a valveshaped scaffold, then move on to develop other parts before assembling a complete heart. “Even if we don’t succeed in producing a heart within 10 years, we’d have a lot of valuable research and new information about bioengineering,” says Sefton. “That’s our fallback position.” A mechanical device, meanwhile, is already in an advanced stage of development. Officials at Ottawa-based WorldHeart Corp. say human tests of an implantable machine to pump blood for patients with seriously weakened heart muscles could begin by mid-year.

But the heart is just one avenue of bioengineering research. Scientists at Laval University’s biotechnology research centre in Quebec City have used human cells to develop a commercial skin substitute that could be on the market within a few years. And a bioengineered blood vessel that has been successfully tested in dogs could be ready for use in humans in five years, says the centres director, François Auger. Also under study at Laval: bones and ligaments for use in artificial joints, and artificial corneas. “I’m convinced that bioengineering will be one of the principal technologies of the new millennium,” says Auger. “In the foture, when some part of a person’s body fails, well replace it.” 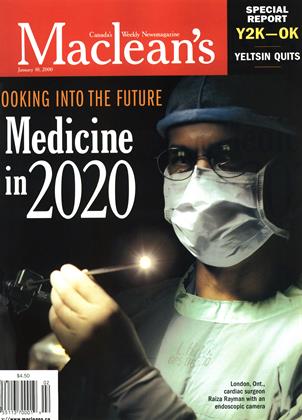