Andrew Phillips in Washington and Barry Came in London

Among the rogues’ gallery of gangsters, racketeers and killers that makes up the Federal Bureau of Investigation’s “Ten Most Wanted” list, one face stands out. Osama bin Laden—alias the Prince, the Emir, and the Director—is described as a tall, thin man who walks with a cane. He is, U.S. authorities insist, the most notorious terrorist in the world—the prime suspect in the 1998 bombings of two U.S. embassies in Africa, in which a dozen Americans and another 289 people died. And not surprisingly, the FBI says that like some Middle Eastern John Dillinger, bin Laden is “considered armed and extremely dangerous.”

Just how dangerous, though, is much less clear. Even before the security clampdown that followed the arrest of suspected Algerian terrorists caught trying to sneak into the United States from Canada just before Christmas, U.S. officials portrayed bin Laden as the spider at the centre of a worldwide web plotting to attack American interests. He has, they said, his own sources of funds, his own sophisticated communications infrastructure of satellite phones and Web sites, and his own radical ideology that unites disaffected Muslim activists in two dozen countries. Bin Laden, U.S. counterterrorism co-ordinator Michael Sheehan told Congress in November, “has created a truly transnational terrorist enterprise.”

Part of that, at least, is surely true. The United States, as the prime target of international terror, is on guard against new dangers. The old threat was from terrorists acting on behalf of countries like Iran, Syria and Libya, or for specific

causes in Palestine and elsewhere. The new model terrorists are harder to pin down: they involve disaffected groups and individuals whose causes cross national borders and established organizations. Many fought alongside Afghanistan’s mujahedeen guerrillas against the Soviet Union in the 1980s, and have since turned up fighting for their concept of Islam in places as disparate as Algeria, Bosnia and now Chechnya. Bin Laden certainly shares their ideology, issuing appeals to Muslims to “kill Americans and their allies” to force U.S. troops out of his native Saudi Arabia.

But most experts familiar with bin Laden’s activities say Washington, which has posted a $5-million (U.S.) reward for his capture, exaggerates his ability to direct operations around the

rest in the city of Kandahar, watched around the clock by Taliban guards. “Osama bin Laden,” says Bari Atwan, “is in no position right now to cause much trouble for anybody.”

That is the story that the Taliban regime, at least, wants the world to believe. Its ambassador to Pakistan, Sayed

world. Instead of being the terrorist mastermind the FBI posters would suggest, they say, bin Laden is more of an ideologue and financier of radical groups. The Taliban, the fundamentalist regime that controls most of Afghanistan, wants good relations with the United States and has kept him under wraps since the embassy bombings. Abdul Bari Atwan, editor of a London-based Arabic newspaper, Al Quds al-Arabi, spent a week with bin Laden in Afghanistan three years ago and says he is now under house ar-

Mohammed Haqqani, says bin Laden’s much-vaunted communications network that he supposedly used to coordinate disparate Islamic groups around the world, no longer exists. “Bin Laden doesn’t even have access to a telephone or a fax,” says Haqqani. Nonetheless, Washington and the United Nations have imposed economic sanctions on Afghanistan to force the Taliban to turn him over to U.S. authorities. In New York City, they have charged him and 16 others with the embassy bombings. The

indictment accuses bin Laden with being the emir of an international terror network known as al-Qaeda—“the Base.”

U.S. authorities, though, have not offered any proof of a direct line from bin Laden, a 42-year-old Saudi with a personal fortune estimated at nearly $400 million, and whoever planted the embassy bombs. The main evidence against him seems to come from his public appeals to kill Americans to drive U.S. troops out of Saudi Arabia and stop the defilement of Islam’s holy places by infidel soldiers. That, plus the fact that many Islamic activists have trained in camps he runs in Afghanistan.

To some experts, that proves little. Milt Bearden, who ran the CIA’s covert operations supporting the mujahedeen in the late 1980s, says the myth surrounding bin Laden is much bigger than the reality. He has, says Bearden, become a cult figure among young Islamic radicals who mimic his appearance and rhetoric. “Things happen in

Despite recent hysteria, the terrorist threat is smaller today than in many previous years

the name of bin Laden that were never organized by bin Laden,” he says. “I think we need an enemy, and we’ve made this guy into the enemy.”

Even outside Afghanistan, say others, bin Laden’s network has been largely dismantled by the Saudi government, working closely with authorities in Algeria and Egypt. Saad Saqih, a prominent Saudi political dissident based in London, says that was done by detaining thousands of Arab activists who fought in Afghanistan to identify bin Ladens allies. “The Saudis now know who is who and what is what,” he says.

Other governments have also clamped down on terrorists they once sponsored or tolerated. And political settlements in places like the West Bank and Northern Ireland have eliminated many of the causes that led to terror. As

a result, the number of international terrorist attacks is way down—from a high of666 in 1987 to 273 in 1998 (last year’s figure will be about the same when the final count is in, say officials). The number of incidents with some kind of government backing is down even more sharply—from 189 to fewer than 13.

As a result, the terrorist threat is smaller today than in many years—de-

spite the near-hysterical alerts that are sounded across the United States when an apparent threat like the Algerian infiltrators from Canada is uncovered. “More Americans,” Bearden notes sardonically, “are killed in roller-coaster accidents than at the hands of terrorists.” In the worst recent year for terror fatalities, 12 Americans died—all in the 1998 embassy bombings. More U.S. children—13—die every day on average from gunfire.

Nonetheless, political pressure and public angst has driven funding for counterterrorism ever higher. In the current fiscal year, the amount of publicly known U.S. spending to fight terrorism will exceed $ 15 billion—up 44 per cent in a single year as government agencies trip over each other for a piece of the rapidly expanding pie. Billions

more are spent by clandestine organizations like the CIA and the National Security Agency.

No amount of money, though, can effectively counter the kind of shadowy threat that now faces the United States and other Western countries. The Islamic groups loosely in sympathy with bin Laden can be tiny—a dozen or so people grouped around a local sheik offering religious guidance. Others, like the Algerians, may be affiliated with one organization but lend their services to another. “These are angry lost souls,” says Mona Yacoubian, a former state department North African analyst. “They’re a mishmash of disgruntled people, so they’re very hard to track.”

One way to fight them is to cut off their cash. Even after the U.S. Embassy bombings, bin Laden continued to receive millions from Saudi businessmen, donated to charities with names like Islamic Relief and Blessed Relief that U.S. authorities say are fronts for him. In December, the United Nations took steps against that. The UN General Assembly adopted an agreement that will require countries that sign it—including Canada—to freeze accounts of organizations suspected of funnelling money to terrorists. That may work against some groups, such as Tamil activists who raise money in Canada and elsewhere for struggles back home. It’s a longer shot against someone like bin Laden, still sitting atop his own personal fortune. EH] 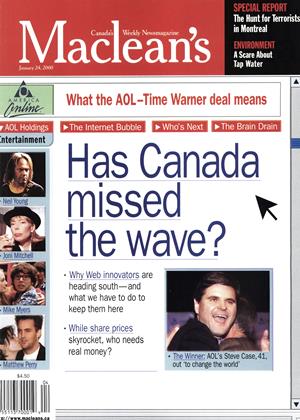