Are the Olympics a huge sporting event or just an endless marathon of advertisements and product placements (“Eyes on the prize,” Cover, Sept. 18)? It seems that this ancient tradition of pitting the world’s best athletes against one another has changed into a two-week-long commercial for CocaCola and Visa. And it’s not just commercials either, it’s billboards that distract viewers from the actual event. I am not saying that there shouldn’t be sponsorship, but that the sponsors need to step back and let the real stars, the athletes, have the spotlight for longer than a minute and 30 seconds between commercials.

The cover of your Sept. 18 issue was very dramatic, even stunning, but the question remains—is the flag an item of apparel, or does it stand for one of the world’s greatest countries?

We have high expectations of our Canadian Olympic athletes without giving them the tools to work with (“Canadas coaching crisis,” Olympics, Sept. 25). It is time to stop the illu-

sion. Either we pull out of the costly, high-level Olympic Games or we change the way we go at them in a radical way. Many people would be willing to donate funding if the government would give us the tax break we see when we donate to political parties. We need to pay and play or cut and run. We can’t do both.

Dr. John David Hilton should be applauded for his use of the international symbol of discontent on a recent Air Canada flight (“Giving Air Canada the finger,” Peter C. Newman, Sept. 18). He said what so many of us have wanted to say ever since the recent formation of the monopolistic carrier. One has to question the legitimacy of a company that needs to spend millions on prime-time TV ads and full-page newspaper ads telling us how good it is. Hilton, I could not have said it better myself.

As a pilot with one of Air Canadas competitors, I am certainly not itching to jump to their defence over most issues, but Dr. John David Hilton is not without blame during his unfortunate experience. Anytime an aircraft has departed the gate, and the seat-belt sign is on, all passengers are required by law to remain in their seats with their seatbelts fastened. That’s what the seat-belt sign means. It doesn’t matter if the aircraft isn’t moving at any particular moment, and it doesn’t matter what risky activity Hilton safely undertakes for recreation. It’s the law and it was put there for good reason. He may not be worried about falling down thanks to his physical prowess, but that won’t im-

I noted with surprise that only 94.6 per cent of Beijing citizens support their city’s bid to host the 2008 Summer Olympics (“But we deserve it,” Overture, Sept. 18). I presume the other 5.4 per cent are being whisked away to appropriate camps, where, by performing useful, physical labour under the party’s watchful supervision, they can receive an opportunity to correct their mistaken, revisionist thinking.

press the passenger he lands on if he does. Peter C. Newman mistakenly wrote that it is against air regulations to fly with unaccompanied baggage. Not quite. It is against air regulations to fly internationally with unaccompanied baggage, but Hilton’s flight was within Canada, in which case there is not always a requirement to remove a departing passengers bags. By giving the flight attendant the finger, Hilton not only demonstrated his lack of self-control, but also his intent to not follow the crew’s instructions. Under the same circumstances, I would have booted his butt off my airplane as well.

It was good to read about Peter May’s experience in Fiji in “Trouble in paradise” (World, Sept. 11). The perception that the May 19 coup was about indigenous rights is very misleading and even mischievous. It was mainly a power grab among Fijian elites at the highest levels, which opened a Pandora’s box of incredible lawlessness. Indigenous rights was the smoke screen to mask the real motive. The struggle between Fijian elites is nothing new— it was there even before Fiji was ceded to Britain in 1874. A campaign of disinformation by racist elements, such as “Bill” and others, was launched to sow fear among indigenous Fijians that the Indo-Fijians were taking over. Nothing was further from the truth. The 1997 constitution was carefully crafted and racially balanced, clearly protecting in-

Congratulations on your “Canadians who inspired the world” (Cover, Sept. 4), but let us not forget those who contributed to our great flying heritage. As a youth, I was inspired by Douglas McCurdy’s first powered flight in 1909, and by First World War airman Don MacLaren, who had more than twice the victories in the same time frame as leading U.S. ace Eddie Rickenbacker. We remember Charles Lindbergh, but have we forgotten Erroll Boyd, first to conquer the North Atlantic outside the easier summer season, which proved that year-round air service was possible? Ross Smyth, Montreal

Another very practical Canadian invention is the egg carton (“Making their marks,” Sept. 4). It was invented

and patented by a resident of Smithers, B.C., Joseph L. Coyle, in 1911. Besides being an inventor, Coyle was one of the first newspapermen in the early pioneering days of northern British Columbia. Although Coyle and his family were able to live comfortably on the proceeds of his invention, they were never wealthy. It seems that some sharp businessmen and their even sharper lawyers made much more out of the Coyle Safety Egg Carton than did its inventor.

Not one of these outstanding Canadians has affected my 83 years one iota compared with Nellie McClung and company. I can remember when women did not have a vote, could not have a credit rating, were discouraged in seeking education, and—the ultimate degradation—were not considered to be persons. Now, I marvel at my daughters and granddaughters, who all have several university degrees, brilliant careers and enjoy many freedoms I

could not. Your selection gave me pleasure and knowledge. McClung gave me and mine a life. Sophia Pat Barber, Victoria Historical perspective As a former history teacher at both the high-school and college levels in Alberta, I agree there is a need to reintroduce history courses in schools (“Reopening the history books,” Cover/Education, Sept. 4), so long as it is not sanitized. We push the Frederick Bantings and the Paul Hendersons because they support an image of Canada we are trying to create. Not only is that dishonest history, it is dull and devoid of motivation for further study. As any good journalist knows, a salable story always has two sides. Do we tell our students about the Orangemen’s support of the Ku Klux Klan in Alberta in the 1930s? That a major tenet of the Klan in Alberta was “racial purity” before Adolf Hitler espoused it in Germany? That Klan organizer R. C. Snelgrove said, in 1929: “You don’t need the Klan here. You have the Orange Lodges”? Or that in June, 1939, Canada emphatically denied entry to the St. Louis, carrying more than 900 Jewish refugees from Germany? The five questions in “Testing Canadians” about Cartier, CPR, insulin, Henderson and the Red River all imply the purpose of studying history is to memorize our great moments. Perhaps the purpose should be to analyze our complete record as human beings and to instil a desire to correct our errors. Bill Baergen, Stettler, Alta. As an immigrant and recent citizen, it often strikes me how many Canadians do not realize just how good it is in this country. Without a knowledge of geography and current affairs, it is difficult to appreciate that Canada is the best country in the world. But without a knowledge of history, it is impossible to understand how Canada became the best country. Therein lies the danger. Without an understanding of how Canada became what it is, how can we, and our children after us, hope to keep Canada at the top of the world? Keith Ashley, Fort McMurray, Alta.

digenous Fijians’ rights. Fiji will recover, but rebel leader George Speight, “Bill” and company will go down in Fijian history as rogues and scoundrels who sacrificed the whole country for their greedy ends.

I don’t have any comment to make about Survivor, it has already used up far too much valuable newsprint and airtime. I do, however, puzzle over letter writer Peter Varsek’s peculiar leap of logic in trashing the CBC (“Natural selection,” The Mail, Sept. 18). Varsek asks “why the CBC does not produce any shows that 6.4 million Canadians watch.” It is, at least in part, because the Canadian media don’t give the attention to Canadian programs that they do to programs from the United States. As for my tax dollars, I’m glad that some of them at least are going to support a good cause.

Claire Hoy spent his entire essay setting up a straw man—the “secular elite”—and then knocking it down (“Pushing the pendulum,” Cover/ Opinion, Sept. 11). Does he really think that some elite consider it wicked to love family above self, to believe in God and to value life? Does he really think he and other social conservatives are painted as satanic? Is it that social conservatives are automatically labelled intolerant, or is it that so many have demonstrated that the shoe fits? In his proposal for referendums on social issues, neither he nor the Canadian Alliance seem to understand the reason for enshrining fundamental rights in a constitution. To do so is a classically liberal (now generally called conservative) response that places these rights out of the reach of public opinion, of Parlia-

ment and, yes, even of so-called activist judges. I wish Floy all the freedom he could desire, but I have no desire for him to impose his views on me.

The history of democratic government is the history of citizens struggling to remove faith-based intolerance and install social tolerance. Should we let intolerant churches force us to believe that evolution had no part in the development of life-forms, or that all human sexuality must fit the “Barbie and Ken” model? No thanks, Claire Hoy. Been there. Tried that. Didn’t like it.

I must say, I see absolutely no contradiction in wanting a balanced budget to accompany an open-minded government that is willing to face modern social issues and changing times (“New might on the right,” Cover, Sept. 11). However, I do see a paradox in supposed lovers of Jesus promoting the death penalty and gun ownership. Unfortunately for evolution, Stockwell Day’s crusading soldiers have at least two things going for them: Jean Chrétien is holding on for another election, and referendums sell. Being from Quebec I know this. People want more participation than voting only once every four or five years. And although referendums threaten to divide a nation, they also unite it by imposing countrywide discussion.

I am almost a senior and the shift in socially accepted values over my lifetime has been quite startling. Even though tolerance is one of the current commandments of the religion of political correctness, this does not seem to extend to the right to have strongly stated views counter to such issues as same-sex marriage, abortion on demand or all religions being of equal value. I applaud Macleans for giving Claire Hoy and other so-cons like me a chance to have our say. 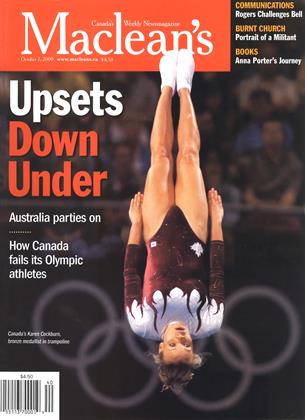