I would like to endorse your selection of Olympic triathlon gold-medallist Simon Whitfield for your cover of the Oct. 23 issue, “Fit for life.” While it fit with the fundamental theme of health, the symbolism went beyond that. What it did was bring focus to an Olympic athlete who epitomizes the mythology of Olympic sport. His story was not one of funding or the shortage thereof. He went out and competed and humbly outperformed his peers to win the gold. Bob Jones, Toronto

Your cover story brings a critically important message to Canadians: develop a healthy lifestyle or suffer the conse-

quences later. Other than smoking cessation, regular exercise has the greatest potential to benefit Canadians and our battered health-care system. Exercise has clearly been demonstrated to improve conditions such as coronary heart disease (our number 1 killer), adultonset diabetes, stroke, chronic obstructive lung disease, osteoporosis, osteoarthritis, depression, chronic fatigue, fibromyalgia, insomnia, back pain and recovery from both cancer and surgery. What other form of therapy or medication can boast such efficacy at minimal expense? A sick baby boom generation will cripple our health-care system. A healthy generation will save it, and be the role model for future generations. Dr. Sean Gartner, Waterloo, Ont.

It seems to me that while your comparisons of the different areas in your health report may be valid, the reasoning behind them is, to some degree, faulty, particularly with regard to life expectancy. First, I assume the calculation of life expectancy is based on death rates at various ages, but how many people who live to 80-plus years have resided in the Vancouver area for most of their lives? In my experience, many of my friends and acquaintances came here from other parts of Canada either midway through their lives or upon retirement. While their death at 80-plus will raise the average life ex-

After seeing the photo showing the Hells Angels insignia on the backs of Quebec bikers in your article “The enemy within” (Canada, Oct. 23), I have to assume that Quebec’s language police haven’t yet gotten around to informing Maurice (Mom) Boucher of his group’s flagrant disregard of the province’s French-only laws.

pectancy here, it has very little to do with the so-called advantages of living in the Lower Mainland. Second, how many of those people have taken part in healthy lifestyle activities on a regular basis? I have one good friend in his 70s who goes up the Grouse Grind and hikes in the mountains, but he was doing similar things before he left Ontario some 15 years ago. Third, average income. It would seem to make more sense to use average disposable income, that is, that amount available after paying for the necessities—food, clothing and housing. On that basis, parts of the Lower Mainland would probably show lower averages than some other parts of the country where living costs are not as high.

If only our health and longevity were completely under our control, as you seem to suggest. Where is the role of genetics (for example, in Quebec’s relatively more homogeneous population), or exposure to particular industries or occupations (such as the connection of mining with asbestosis and emphysema), or factors in our air, water or the earth (living next door to the Sydney tar

ponds, or perhaps in Walkerton, Ont.)? And is it possible to become healthily fit only via recreational activities, rather than, say, construction work or gardening? Just for starters, the cities that appear at the low end of your health ranking include quite a few smokestack industry candidates, while those at the top are not only larger and more affluent, but also decidedly more high-tech. There’s lots more to uncover here.

The quote from B.C. outdoorsman Paul Vaughan saying that an hour of riding up the side of a mountain is equal to a day of riding in the prairie falls flat (“Lifestyle dividends”). I have enjoyed both the North Shore climbs and the wide-open prairie, and if you have ever fought a strong prairie headwind for an hour, the mountains seem like a ride in the park.

As a registered nurse and a longtime subscriber, I was delighted to see the recognition given the nursing profession in your editorial “In defence of the health system” (Oct. 23). The contribution of frontline nurses to the wellbeing of patients is not always given the press it deserves. I was particularly taken with the comment about “true Canadian heroes.”

Ah, the joy of enlightened political debate—the demonizing, name-calling and complete lack of personal responsibility (“Getting ready for a fall election,” Canada Notes, Oct. 23). The sad fact is that only days into the campaign, I’m describing the voters and not the candidates. For all that the critics seem to be arguing that an early election is typical of a government that is out of touch with the average Canadian, arrogant and opportunistic—isn’t this then the best time for an election? Rejoice that there is an election and be thankful that

this oppressive regime didn’t force us to endure another year and a half. My greatest disappointment is that we live in a representative democracy and that the electorate is only consulted every few years.

I read Anthony Wilson-Smith’s column “Watching the landscape shift” (Oct. 23) with complete fascination. The issue of visible minorities and outof-the-closet gays (for lack of a better term) seeking and getting political office is both intriguing and wonderful. In other parts of the world, minority groups are seeking political influence and are either being ousted undemocratically, as in Fiji, or being killed like the First Nations people in Mexico. I have a problem, however, with a strange turn the article takes near the end. Wilson-Smith writes: “Pearce has the right idea: if, as some calculate, his riding is one-third gay, he figures gay issues should take about one-third of his time and he can serve everyone the rest of the time.” I am a heterosexual male, who knows only what I have read in the newspapers about the political issues facing the homosexual community, but I’m sure that gay issues probably take up the same time and effort for a gay person that environmental issues do for the average mother, or union issues do for the average factory worker. If Pearce believes what he is said to believe, then he should redo his math or his political career will be a candle in the wind. 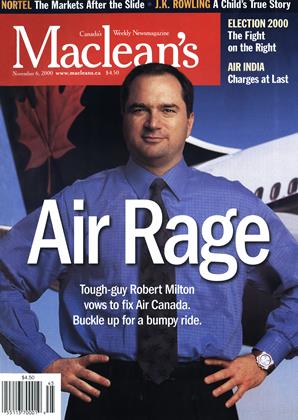