Vanity Fair's Hollywood (Viking, $85) is a fat Toblerone slab of celebrity past and present. The images range from Sophia Loren eyeing Jayne Mansfield's alpine cleavage at dinner to a windblown Jack Nicholson in a dressing gown and shades driving golf balls off his cliff-side backyard. This is a luscious collection, graced with vintage articles from the likes of Dorothy Parker and D. H. Lawrence, plus pearl-like captions from Christopher Hitchens. What’s striking is how frames from Vanity Fair's early years (1914-1936) seem so candid compared with the conceptually engineered portraits from Annie Leibovitz and Herb Ritts. Holding a mirror up to Hollywood, these images show how celebrity culture has turned vanity into a science.

One of the most coveted gift books this season is The Beatles Anthology (Raincoast, $92). And with its candid testimonials (John Lennon’s contribution comes from old interviews), never-before-published photographs and snappy design, this one is a winner. Among the fascinating bits: the Plastic Ono Band, Lennon’s group with wife Yoko Ono, first performed in Toronto in 1969—a debut so successful that it struck the final blow to the Beatles. Another Fab Four-related offering is Paul McCartney: Paintings (Little Brown, $72), the first book showcasing the former Beatles 17-year sideline as an artist. And it turns out that Sir Paul, who has also dabbled in classical music composition, is an accomplished painter. Influenced by surrealism and abstract expressionism, his work is suffused with humour and an exultation in colour.

Visionary power pulses between the covers of William Blake: The Complete Illuminated Books (Penguin, $90). The 393 plates show just how much the artwork of the English creator (1757-1827) is integrated with his Songs of Innocence and of Experience, Jerusalem, The Marriage of Heaven and Hell and other works. The gorgeous volume fulfils Blake’s dream that large numbers of people have a chance to experience his verse and radiant illustrations at the same time.

Images created by the pre-Raphaelites continue to be some of the most popular of all time, cropping up regularly on book covers and on posters destined for college dorms. In The Art of the Pre-Raphaelites (Princeton, $80), British art historian Elizabeth Prettejohn zeros in on all the constituents of a preRaphaelite picture—not just colour and form, but the group’s distinctive takes on, for example, landscape and sexuality. The stunning 170 colour reproductions make this volume beautiful as well as substantial.

Perhaps the most ingenious concept for an art book this season is found in Five Hundred Self Portraits (Phaidon, $45). This small book, whose scant text consists of an essay by artist Julian Bell, grandson of Bloomsbury Group painter Vanessa Bell, features self-portraits of creators ranging from a medieval monk who illustrated manuscripts to contemporary artists such as David Hockney. A nifty little charmer.

A century ago, Seattle photographer Edward S. Curtis set out on a 30-year quest to document the lives of North America’s native peoples, creating a collection of massive historical and artistic significance. Sacred Legacy: Edward S. Curtis and the North American Indian (Distican, $88.50) offers a stunning selection of almost 200 of Curtis’s pictures. Faces, masks, villages, crafts, fishing and hunting expeditions—the images, along with essays by experts on the photography, give a powerful sense of Curtis’s achievement.

Jazz: A History of America's Music (Random House, $95), companion to the PBS series, is a smart, sprawling chronicle of the genre, written by Geoffrey C. Ward and Ken Burns, authors of The Civil War and Baseball. Contemporary artists get only seven pages, but overall this is an indispensable, richly illustrated study.

The Canadian Opera Company may be Toronto-based, but its impact is truly national through regular radio and less frequent television broadcasts. And the company has nurtured many of Canada’s international stars—Ben Heppner, the world’s ranking heldentenor, for one, got his start at the COC singing minor roles. Its rise from a two-bit operation 50 years ago to a world-class outfit today is traced  authoritatively in Opera Viva (Dundurn, $49.99) by former University of Toronto music professors Carl Morey and Ezra Schabas. The only photo missing in this richly illustrated volume is of the oft-promised, yet-to-be-built opera house.

Larry Towell, the first and only Canadian member of the prestigious Magnum photo agency, won the first Roloff Beny Photography Book Award last year. His impressive eye, technical wizardry and superb sense of composition are evident in The Mennonites: A Biographical Sketch (Phaidon, $89.95). Towell's fascination with Old Colony Mennonites took him to rural Ontario and Mexico, where he shot people, farms and deserted supper tables. Breathtaking.

Canadian food lovers-photographers-travellers Jeffrey Aford and Naomi Duguid have won awards with their past books on breads and rice. Now they’re back with the splendid Hot Sour Salty Sweet: A Culinary Journey Through Southeast Asia (Random House Canada, $55). This is a piquant treat for lovers of Asian food, spiced with the authors’ vibrant pictures of people and places and an array of recipes.

Bison carpaccio, anyone? Newfoundland berry pudding? Anita Stewart’s The Flavours of Canada: A Celebration of the Finest Regional Foods (Raincoast, $34.95) is a compendium of recipes from across the country—some from superstar chefs, the others handed down through generations of ordinary folks. They’re all packaged with Robert Wigington’s tasty pictures of raw ingredients and finished dishes.

Combining elegant design with cutting-edge sensibility, Donna Hay’s cookbooks have been some of the most popular in recent years. Now, with Flavours (Whitecap, $29.95), Hay has come up with another winning concept. There are nine sections, featuring such ingredients as vanilla, ginger and garlic—all in a design that feels like a breath of fresh air.

Among the celebrity chefs with gorgeous new books, Alfred Portales 12 Seasons Cookbook (Random House, $69.95) stands out. Chef and co-owner of New York City’s Gotham Bar and Grill, Portale has come up with a new idea when all cookbook concepts seemed to have been exhausted: monthly cuisine. A stunning book with knockout dishes.

Other chefs with winners this season include Mexican food expert Rick Bayless, whose Mexico One Plate at a Time (Distican, $52) focuses on the classics of Mexican cuisine and then shows how to embellish them. With The Naked Chef (H. B. Fenn, $47), new cooking hotshot and TV personality Jamie Oliver proves he’s more than just a pretty face. And in Seasons (Whitecap, $29.95), Toronto cooking hero Jamie Kennedy proves he’s one of the most inventive artists working with food.

Volumes on wine have become staples of gift-book publishing, and this year’s standout is The Global Encyclopedia of Wine (Raincoast, $110), a massive tome duplicated in the CD-ROM tucked inside the cover. The wide-ranging book comes with hundreds of maps, photographs and charts, a wine-reference table, and essays by wine experts from around the world.

However difficult humans find time as a concept, argues John Langone’s The Mystery of Time (National Geographic, $52), they’ve sure come a long way in measuring it. From Stonehenge through medieval clocks to particle accelerators trying to replicate the first seconds following the Big Bang, Langone offers an absorbing story complemented by marvellous illustrations. As for the question of whether the whole notion of time is a sublime human illusion, Langone leaves the last word to physicist Stephen Hawking: “Only time (whatever that may be) will tell.”

From the best-selling Griffin & Sabine trilogy to other tomes in which exquisite graphics give the text a dream-like quality, Nick Bantock has never created a book for the literal-minded. That includes his autobiography, The Artful Dodger (Raincoast, $55), the very tide of which warns readers to be wary.

But they should be enthusiastic, too. The compelling art, taken from Bantock’s entire body of work, comes alive next to the authors detailed discussion of his techniques and aims.

The title of Atlas of Natural America (National Geographic, $59) might strike Canadians as odd, considering “America” takes in Canada even as it stops abruptly at the Rio Grande. But the content more than makes up for the concept. Brief written sketches establish the history, natural and otherwise, of more than 100 protected natural areas in the United States and Canada. The real stars, however, are the stunning photographs and National Geographies trademark topographical maps.

The first volume of journalists Don Gillmor and Pierre Turgeon’s Canada: A People s History (McClelland & Stewart, $60) is a worthy companion to the superb CBC history series of the same name. As with the TV version, the verbal content focuses on the words of real witnesses to events. Coupled with plentiful contemporary illustrations, the result is an informative and exciting book that carries the story of Canada through Confederation.

The Imperial War Museum in London, repository for the works of official British photographers of the world wars, has for the first time collaborated on a book featuring the jewels in its crown. The evocative result is The Second World War in Photographs (Whitecap, $49.95), containing 500 mostly black-and-white shots. Among I them are images both famous—St. Paul’s Cathedral standing safely amid the Blitz’s devastation—and rarely seen, like a nurse demonstrating how to use a gas mask designed for infants.

The Sept. 28 death of Pierre Elliott Trudeau has spawned a number of photograph-rich retrospectives, including a Maclean's commemorative issue, Trudeau ($9.95), and Key Porter’s book of the same title ($29.95). The latter also features commentary and tributes by, among others, Conrad Black and Wayne Gretzky. Another primarily pictorial tribute is the elegantly packaged Trudeau Albums (Penguin, $50), in which text by historian Jack Granatstein, novelist Mordecai Richler and four others does an excellent job of placing the former prime minister in the context of his times.

It’s a simple but daunting idea: an environmentally sensitive trail stretching from St. John’s, Nfld., to Victoria and snaking up to both Hudson Bay and the Arctic Ocean. Trans Canada Trail: The 16,000 Kilometre Dream (Boston Mills, $49.95) certainly makes the effort look worthwhile. Often adventurous photography by veteran John de Visser is the main draw; the text sometimes seems off-base, with prominent quotes on the nature of Canada by the likes of actress Jane Fonda. But Trans Canada Trail brings the idea of this ambitious project to life.

From abalone to The X-Files to the history of the Nanaimo bar, you don’t have to be from the West Coast to enjoy a browse through the Encyclopedia of British Columbia (Harbour, $99.99 with companion CD-ROM). The hefty 806-page book has more than 4,000 entries that turn British Columbia inside out—its history, geography, politics and people. More than 2,000 photos, maps and illustrations add to the telling. E3 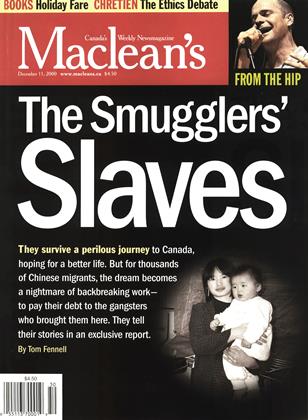