It’s a common experience at the dentist: you bite down on a slim plastic sheath, the hygienist leaves the room and, zap, a machine takes an X-ray of your problem tooth. Increasingly, however, dentists are moving away from conventional film in the mouth and opting to go digital. David Gane, a dentist and chief executive of Dicom Imaging Systems Inc. in White Rock, B.C., says a digital X-ray reduces the time a patient is exposed to potentially harmful radiation by as much as 75 per cent. And the software that Diacom produces to adjust image contrast, brightness, or add colour, says Gane, improves

a dentists ability to make a diagnosis. While conventional X-rays take about five minutes to shoot and develop, their digital counterparts take just seconds. “Saving 4 V2 minutes in a dentist’s life,” says Gane, “is big news.”

There are two types of digital X-ray hardware available: one wired, the other wireless. In the former, the patient bites down on a sensor connected by wire to a computer monitor. In the latter, a technician inserts a wireless sensor sealed in a protective plastic bag into the patient’s mouth. Once exposed, the sensor is removed and placed in a scanner to display the image. In both sys-

terns, the X-ray machine itself does not have to be replaced. Since the average North American dentist’s office takes 800 X-rays a month, at a cost of about $1.50 each, the savings, says Gane, are substantial. According to a recent survey, 13 per cent of North American dentists intend to buy digital X-ray equipment within the next year.

Intel Corp., the world’s largest manufacturer of computer chips, has developed what it says is the smallest and fastest transistor ever made. The transistor, which acts like a gate for electrons, is about 1/2,000th the thickness of a human hair. Intel predicts that in five to 10 years it will be able to squeeze more than 400 million such transistors onto a single computer chip, which would run at 10 gigahertz, or roughly 10 times faster than today’s fastest chip. It would be powerful enough for a device to instantly translate speech from another language as the person talks.

Canadians will be among those to receive a present from the solar system on Christmas Day. Weather permitting, most North Americans (except those in Alaska and the Yukon) will be able to observe the moon partially eclipse the sun in the morning or early afternoon. Times for various cities are located at ivww.skypub.com/sights/eclipses/ solar!001225tab le. html. 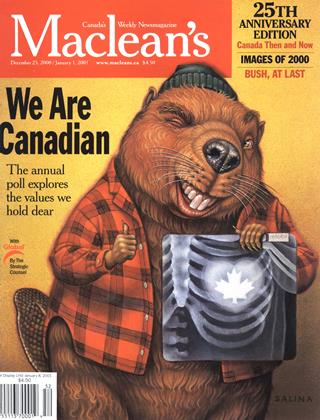