Christopher Young, 73, retired in 1996 from a life in journalism that included 14 years as editor of the Ottawa Citizen. Just 2 V2 years later, he discovered that he, like his mother before him, had Alzheimer’s disease. Aided by his wife, Ann, he wrote this account of coming to grips with the tragedy that now afflicts more than 200,000 Canadians over the age of 65:

This morning, I spent about 15 minutes trying to make the damn computer work. Stupid, eh? But the old noggin just doesn’t work the way it did during the 42 years I spent working for the Southam newspapers. Today, I swore a little, then yelled from my office on the third floor to Ann on the first floor. She didn’t hear me, so I trotted down and asked her to come and make the computer work.; Both of us may be getting rid of unnecessary tummy, running up and down the stairs, so we could look at my situation as a boon. Sorry, Pollyanna, I can’t buy that.

I should be a happy man. After all, Ann and I have just come back from a holiday in San Francisco and Los Angeles, enjoying a winter escape from our home in Ottawa. Nobody seemed to think I behaved much differently from the people around us as we climbed the steep streets and leaped on and off the cable cars of Frisco. Like everyone else, we were squeezed tight, but reveling in the wonder of the machines that carried us up and down the hills. Yes, we enjoyed it, despite the copious rain.

But I am in an early stage of Alzheimer’s disease.

People like me don’t look funny, babble, cry out or make unseemly noises in public. Perhaps because I look normal, I found it hard to get help when I was separated from Ann during a tour of the island prison of Alcatraz in San Francisco Bay. Misjudging the situation, I took a boat returning to Fisherman’s Wharf and then walked for hilly blocks until I realized I was lost, and that the best bet was to retrace my steps. Back at the wharf, I chose the wrong ferry dock and the wrong people to ask for help. Most of them brushed me off, till one sensitive woman heard me say “Alcatraz” and took me to the right dock. Ann was in the ferry company’s office and about to call the police when I appeared. The efforts of all the National Park Service rangers who now man the prison had not turned me up, so I became the first man to escape from Alcatraz and survive.

I was diagnosed by a neurologist in December, 1998, aged 72, after a year of waiting lists, tests, more waiting and more tests. I initiated the process myself because I was having trouble finding the right words in conversations. My mother had suffered from Alzheimer’s and the symptoms were suspiciously familiar. When I mentioned that to our family doctor, John Shearman, he immediately put me in line for the series of investigations that eventually added up to Alzheimer’s, my own reluctant diagnosis. The neurologist prescribed Aricept, a drug recently arrived on the market and fortunately covered by the Ontario health plan. It has slowed the progress of the disease for many people in the earlier stages.

So far, people don’t notice much, except for my speech difficulties. Later on in the process that is going forward in our brains, we Alzheimer’s people—and our families—are likely to notice more unusual behaviour, which will require more help at home. Unless another illness or some accident intervenes, we will eventually go to some institution where we will probably die of the disease that has destroyed our minds. The only hope is some kind of success by scientists busily trying to discover what causes Alzheimer’s, and how it can be defeated (page 32). For now, most of the support for people like me comes from Aricept and the Alzheimer Society of Canada.

I discovered that people with Alzheimer’s in a few cities in Canada get together in small groups to exchange their thoughts and experiences. In Ottawa, the Alzheimer Society took the lead by convening people who had approached them to explore the services the organization offers. My reaction when I learned about these monthly sessions was that I wouldn’t want to hear other people talk about this dismal subject. But assuming there was no harm in trying once, when hope seemed so unlikely, I decided to look. On that first day, I changed my mind and joined the club.

The numbers are small, seven to 12 men and women, most in their 60s and 70s, from various walks of life. Most of us are on Aricept. The chatter is lively, as everyone has stories to tell of past lives, questions to ask about our grim future. Sometimes a few will continue the talk over lunch at a nearby restaurant, with the spouses who are our drivers.

Alzheimer’s disease strikes the brain, and only later attacks other parts of the anatomy. That is why I can still visit a friend, talk to my children and grandchildren, walk the dog or take out the garbage. Not to mention taking a six-week tour of Labrador, Newfoundland and Nova Scotia last summer, as well as the more recent venture to California. People of my age know that life is not a permanent contract. Men and women alike may get this fatal disease, but then we know that we may get cancer, have strokes or suffer from the multifarious ailments associated with aging.

It is a much greater tragedy when younger people are stricken with Alzheimer’s, as they sometimes are, and an even more dev-

‘So now, I live day by day and enjoy what I can. I don’t think the game is over yet.’

astating blow to the individual and family afflicted by “early onset,” as it is known. We older ones expect problems and we have the advantages we share with many other retired people: less responsibility at home, and the still-possible pleasures of travel, for example.

I live a fairly normal life, yet it is not the same. The plus side is that the disease is not contagious—which allows males to kiss our

versa. Regrettably, I tend to

bark at my wife and bumble the computer. Reading, unhappily, does not appeal so much; it seems to take an unreasonable length of time to finish a book. Arithmetic has become virtually impossible without help.

Perhaps the most devastating loss so far is my driver’s licence. Physicians are obliged by provincial law to report Alzheimer’s people to the ministry of transport. However, both Shearman and the neurologist who made the diagnosis recommended that I be tested before the licence was withdrawn. After months

of interruptions and delays, the final result of testing was negative. There’s no arguing about it, but you may imagine my frustration as I watch licensed drivers running red lights, tailgating and generally endangering me, as well as themselves.

But if I forget what happened yesterday, memories of earlier times are joyful and vivid. For several years, I

have been trying to write a memoir of my life: about my birth in Ghana, where my newlywed parents were teaching school and learning the language; of growing up in Winnipeg as a headmaster’s son; the death of my father, Norman Young, in the attack on Dieppe in the Second World War; about university life in Winnipeg and Oxford; and all those years in journalism, starting at the Winnipeg Tribune (now deceased), continuing in Hamilton, ending in Ottawa, but not before the job had taken me to great cities, to meet world leaders in distant lands and see important nations virtually all over the world.

So now, I live day by day and enjoy what I can. I have wonderful friends who have stuck with me and put up with my muddling of lunch dates. I still hope to finish my memoir, with Ann’s help and my family’s support. My mother died of Alzheimer’s when she was 92, while I held her hand. I don’t think the game is over yet. 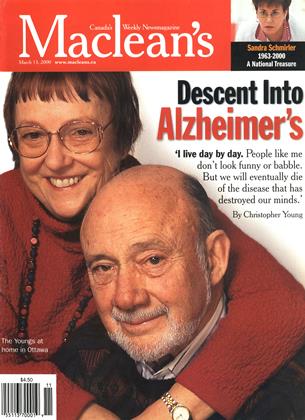