When it comes to money’s place in politics, Canadians are strangely sanguine by international standards. Europe has just been rocked by a major party fund-raising scandal in Germany, where politics was previously thought to be, by and large, clean. So has Israel. In the United States, John McCain’s bid for the Republican presidential nomination went down in flames, but his quest to purify campaign financing pushed that issue to the forefront. Yet in Canada, the way politicians raise money attracts so little notice that a new Canada Elections Act has quietly reached the Senate—after passing in the House of Commons earlier this month—with barely a peep over its failure to enact political-finance reforms urged by both a royal commission and the country’s chief electoral officer. Why so little fuss? “It’s ingrained in Canada,” says Aaron Freeman, author of a new book on money in Canadian politics, “that if you’re talking about dirty politics, you must be talking about the U.S.”

But that sense of superiority may be eroding. The continued uproar over the mismanagement of job grants doled out by the human resources development department has focused attention as rarely before on the possibility of government largesse being linked to campaign spending. Consider Prime Minister Jean Chretien’s Saint-Maurice riding: the Reform party calculates that one-third of the donations to his re-election fund in 1997 came from companies and individuals who benefited from federal grants and contracts. Of course, the mere fact that many Chrétien supporters also do business with Ottawa is not evidence of malfeasance. But

the overlap at least bolsters the proposition that the new act should open the books of riding associations. It doesn’t. “The so-called black hole of constituency financing is one area that definitely stands in need of reform,” declares former Conservative MP Patrick Boyer, a lawyer who has written extensively on the subject of election laws.

Boyer’s “black hole” reference goes back to the 1992 Royal Commission on Electoral Reform and Party Financing, which bemoaned the way riding associations are allowed to raise tax-receipted funds, mostly in secret. Since 1974, when the foundations of the current rules were laid, federal parties have had to reveal once a year who gave them money and how much they gave. But the constituency associations of local MPs have always operated largely beyond the laws reach. Only for the five brief weeks of an election campaign must they disclose donations, which is how details of Chrétiens campaign backers came to light. During the long years between elections, riding associations raise, spend and bank money almost entirely free of outside scrutiny.

In the smoke-filled world of political financing, local riding associations can be a law unto themselves

Most party organizers like it that way. But some are uneasy. Even Liberal Senator Dan Hays, the veteran Calgary fund-raiser in charge of steering the new elections bill

through the upper chamber, would prefer to see constituency finances opened up to pub-

lie scrutiny. “In my view, it is a very good bill the way it is,” he cautiously told Macleans. “But my own preference—speaking here as a

political activist, not as a parliamentarian— would be for greater disclosure at the riding level.” His view is hardly novel: the 1992 royal commission, chaired by Montreal businessman

much more than a fringe issue. The 1,672 candidates who scrapped for parliamentary seats in the 1997 election spent $39.2 million—more than the $34.9 million the parties

spent. And while the parties had to account for every donation over $ 100 (a threshold that will rise to $200 under the new act), separate disclosure by candidates was often less complete. The main gap: riding associations commonly make big contributions to their candidates, but

the original sources of that money usually remain a mystery. Take the case of Industry Minister John Manley. He disclosed the identities of individuals and of companies who contributed $10,150 and $15,800, respectively, towards his 1997 re-election run. But Manleys biggest backer was his Ottawa South Liberal Riding Association, which contributed a whopping $74,664—and the source of that is unknown.

Freeman labels constituency finances “loophole number 1.” But it is far from his only target in Cashing in: Money and Influence in Canadian Politics, scheduled to be published by McClelland & Stewart next month. He says the second major gap in the law is its failure to regulate leadership races. Parties

are free to set whatever spending rules they like for choosing leaders. And enforcement of even these self-imposed guidelines has been uneven. The Conservative party set a spending limit of $900,000 for candidates in its 1993 leadership race, but the main contenders, Kim Campbell and Jean Charest, reportedly spent far more—with impunity. “The problem with voluntary rules,” Freeman says, “is that the parties police them and the parties have an interest in not discovering any irregularities.” What’s more, leadership candidates often funnel donations through their parties or local riding associations in order to issue tax receipts. That means taxpayers are underwriting internal party processes—which Boyer argues should not be allowed until leadership contests are brought under public-disclosure rules.

While the government ignored some big issues in political financing, the Canada Elections Act, tabled in the House last October and now nearing final passage in the Senate, is touted as a major reform package. Among its main measures:

• Interest groups will be limited to spending $150,000 during elections, and no more than $3,000 supporting or opposing a particular candidate.

• Parties will have to produce more detailed financial reports, including, for the first time, a statement on revenue and spending of trust funds.

• Parties and candidates will have to disclose not just the names of donors who gave more than $200, but also addresses—key to identifying individual contributors.

It is more than just leadership spending, however, that raises eyebrows. Everything from Ontario Premier Mike Harris’s golf club membership (paid for along with other thousands of dollars of personal expenses by his riding association over a 15-year period) to Reform Leader Preston Manning’s Hugo Boss suits (subsidized by a special Reform party fund), has been slammed by pundits and political opponents alike as a dubious use of tax-receipted donations. And Freeman says his book will show that Canada’s tax treatment of political contributions, combined with partial reimbursement of party election expenses, makes public support for politics in Canada much more generous than in the United States. “Public subsidies make up about a third of the revenues of the parties,” he estimates. “These are not private entities like any other—they are massively subsidized.” Chief electoral officer Jean-Pierre Kingsley, the bureaucrat who oversees federal elections, has argued for years that financing rules should be extended to both leadership races and constituency associations. Still, Kingsley praises the new acts thrusts in other areas—such as imposing a $150,000 limit on election advertising by interest groups other than the registered parties. But when he appeared before a House committee studying the bill last fall, he also pressed the MPs—to no avail—to consider extending the scrutiny rules to fund-raising by local ridings. He is expected to repeat that message when a Senate committee examines the bill later this month, before its final passage into law. “Eventually, we need a regime where not one penny moves into the political arena without it being made known to the Canadian public,” Kingsley told Macleans. “Were not there yet.”

Not even close, Freeman contends. And the lack of any sense of urgency on the issue, he says, can be traced to the prevailing belief that Canada has avoided U.S.-style excesses. But does moneys influence in politics change so dramatically at the 49th parallel? Party fund-raising in the two countries— considering that the U.S. population is about 10 times Canadas—is closer than many might assume. President Bill Clinton’s Democrats raised $345.5 million (U.S.) in the two-year cycle culminating in the 1996 presidential election, while Chrétiens Liberals raised $31.6 million in 1996 and 1997, the year of Canada’s last general election. Assuming the same political bang for the buck in each country, regardless of the values of the currencies, the two fund-raising machines seem in remarkable lockstep.

With so much cash sloshing around Canadian politics, the stakes surrounding the new elections act should be much higher, Freeman argues: “Any bill that doesn’t show us the money should be scrapped.” But as the act cruises towards clearing its final hurdles in the Senate, it seems that for Canadian voters much of that money is still going to remain out of sight— and out of mind. El 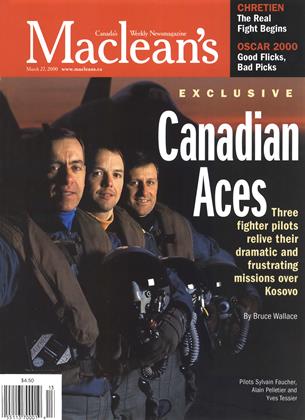