As ‘Titanic Tuesday’ nears, maverick John McCain is poised for an epic upset

Politicians tend to fall in love with their own self-image, and Senator John McCain is no exception. First, he compared himself—over and over—to Luke Skywalker locked in combat with the Dark Side: “I’m fighting to get out of the Death Star ! They re cornin’ at me from all sides!” Then, his campaign began playing Star Wars theme music at the end of his raucous rallies. Finally, to make sure absolutely everyone got the

point, McCain and his wife, Cindy, joyfully brandished toy light sabers as they celebrated his victories last week over Texas Gov. George W Bush in Michigan and his home state of Arizona.

For once, at least, the prolonged metaphor seemed apt. McCain’s quest for the Republican presidential nomination may not have the epic quality of Luke’s struggle with Darth Vader. In fact, it might just be another mud fight between two politicians who, despite their heated rhetoric, are very similar on most issues. But try telling that to the starry-eyed supporters who flock to McCain’s banner. Near Seattle last week, hundreds mobbed one of his rallies and pounded on his campaign bus to get his attention, prompting Cindy McCain to compare the experience to

travelling with a rock star. Even in the candidate’s darkest moment, right after the beating he took from Bush on Feb. 19 in the Republicans’ South Carolina primary, they kept coming. In Saginaw, an industrial town 160 km north of Detroit, investment analyst Rich Dommer turned up at a McCain rally with a copy of the senator’s autobiography, Faith of My Fathers, in which he details his ordeal as a prisoner of war in Vietnam. “I read it and just fell in love with the guy,” said Dommer.

No other politician inspires that kind of gushing from jaded American voters these days—especially in the waning months of a presidency memorable chiefly for a dispiriting series of scandals. A survey of historians released last week ranked Bill Clinton in

the middle of the pack overall among U.S. presidents (21st out of 41)—but dead last in “moral authority.” McCain, 63, has successfully presented himself as what many call the “antiClinton,” a man of integrity and courage. “It’s character,” said Dommer. “It’s just who he is.”

That has been enough to propel McCain from one of half a dozen Republican hopefuls nipping at the heels of an overwhelming favourite (Bush) to a powerful challenger. And it was enough to give him an upset win over Bush, 54, in Michigan, as well an easy triumph in Arizona. In South Carolina, Bush had just whipped McCain by a margin of 54 to 41 per cent in a down-and-dirty contest in which the Texas governor moved sharply right to appeal to religious conservatives and paint his rival as a closet liberal. He zeroed in on McCains character as well, accusing him of being a Washington insider in thrall to the very lobbyists and special interests he professes to be fighting. It wasn’t pretty, but it worked—and allowed Bush to reclaim his position, at least for a few days, as front-runner for the Republican nomination.

If South Carolina got Bush back in the game, Michigan should have sealed it for him. The states Republican governor, John Engler, is a longtime ally of the Bush family who sent his organiza-

tion into battle for George W The day before the vote, McCain’s top aides were clearly steeling themselves for a loss that could have dealt a fatal blow to his candidacy. In Saginaw, despite the enthusiasm of Dommer and 500 others who cheered on the senator in a highschool gymnasium, they were already rehearsing reasons for a defeat. “We don’t have to win here,” campaign manager Rick Davis said in an interview as the Star Wars music blared

in the background. “We can go on.”

As it turned out, they didn’t need the excuses. McCain beat Bush by a healthy margin of 50 to 44 per cent in the first primary state that will be a real battleground in the general election.

New Hampshire, where McCain won his first victory on Feb. 1, is too small, too quirky and too Republican. South Carolina, where Bush struck back, is too conservative and too southern. But Michigan, the eighth-most-populous state, is a bit-of-everything place that swings between the two parties. By winning there, McCain threw into serious doubt Bush’s claim

that he can forge a successful coalition against the Democrats in November.

The problem for Bush is that he tacked so far to the right to save his candidacy in South Carolina. The move he may regret most was his visit to the suddenly infamous Bob Jones University in Greenville, S.C., a fundamentalist college that bans interracial dating and promotes antiCatholic views on its Web site (the Pope, it says, is “satanic”). Within days the visit had come to symbolize Bush’s departure from his earlier stance as an inclusive

“compassionate conservative”—fuelled by several influential TV commentators who happen to be Roman Catholic (notably Tim Russert of NBC’s Meet the Press) who pushed the incident to the fore.

As he campaigned in Michigan and then went on to California for the next big showdown on March 7, Bush argued in vain that his Bob Jones visit said nothing about his religious attitudes— pointing out that the Republicans’ modern-day hero, Ronald Reagan,

once spoke there. But the issue would not die, helped by a barrage of election-eve phone calls orchestrated by McCain’s campaign, telling voters that Bush “has stayed silent” about the university’s antiCatholic positions. By midweek, the gov-

ernor was on the defensive, forced to proclaim: “I reject bigotry. I repudiate anti-Catholicism and racism.”

If Bush’s new dilemma was that he may alienate centrist voters, McCain’s is the mirror image. The early Republican primaries, including Michigan’s, were open to all voters—independents and Democrats as well as registered Republicans. While McCain won

overall in Michigan, he had the support of only 29 per cent of Republicans. He portrays that as a successful effort to broaden his party, bringing in new supporters to construct something he calls “a new McCain majority.” Bush won handily among Republicans in Michigan, gaining support from 66 per cent of them.

In fact, some Democratic party leaders actually urged their supporters to vote for McCain in order to damage Bush and embarrass Engler, his chief backer in the state. “There was a clear effort,” Bush charged, “to hijack the primary.” (Ironically, though, Engler arranged for Michigan’s primary to be open to all voters, thinking that would benefit Bush. Months ago, it looked like the governor’s main challenge would come from the right-wing candidate Steve Forbes. No one anticipated he would be fighting for survival against a man who appeals more to moderates.)

This is the ground that the two men will fight over until mid-March, when the Republican nomination will almost certainly be decided. McCain will try to persuade more loyal Republicans to join the independent voters powering what he calls “our crusade.” “Don’t fear this campaign, my fellow Republicans,” he said last week. “Join it!” Bush, in

turn, will argue that McCain has failed to win over the core of his own party, and will try to recapture the moderate image that he abandoned in his stayingalive effort down South.

The odds are still stacked against McCain, in large part because of the campaign schedule. This week, the Republicans hold primaries in Washington state and Virginia and a caucus in North Dakota. McCain is concentrating on relatively moderate Washington to keep his momentum going. Then, on March 7, comes the big showdown—primaries and caucuses to choose convention delegates in 15 states. Traditionally known as Super Tuesday, this year it is being dubbed Titanic Tuesday because so much is at stake for both Republicans and Democrats in the overshadowed contest between Vice-President AÍ Gore and former senator Bill Bradley.

McCains problem is that only a few of the March 7 states allow the kind of cross-party voting that gave him his margin of victory in New Hampshire and Michigan. Most of them—including the biggest prizes, New York and California—restrict voting for conven-

tion delegates to Republicans only. McCain’s organizers say he has a good chance to win several New England states and New York, where Republicans tend to be relatively moderate (“We like the cold weather,” says his top strategist, Mike Murphy). The key will be whether he can pull off a minor miracle and convince a majority of California Republicans to back him. That state alone will send 162 delegates to the Republican convention next July, where 1,034 will be needed to win. If he falls short there, he runs into an even higher wall the next week, on March 14, where a group of southern states including Bush’s own Texas and Florida (where his brother, Jeb, is governor) hold primaries.

The rules and the numbers are all on Bush’s side—though his once overwhelming money advantage has dwindled. After spending a record $90 million so far, he has only about $ 15 million in the bank, according to authoritative reports last week (compared with about $ 12 million for his rival). McCain’s hope is that Bush will keep stumbling and the chemistry of the race will change. Bush became the instant front-runner among Republicans as soon as he declared his candidacy last summer for one simple reason: the party’s leaders long for a winner in November after eight years of Clinton. If they conclude that McCain has a better chance, they may swallow their distaste for an unpredictable maverick and toss the Texan overboard. “It’s clear Republicans like electability,” says McCain aide Davis. “That’s what the surge for Bush was based on. Hopefully, it’ll come to us.”

Almost lost in the Republican fight is the contest between Gore, 52, and Bradley, 57, which also comes to a head on March 7. Until late January, McCain and Bradley shared the spotlight as feisty insurgents batding establishment favourites, but McCains sudden rise eclipsed Bradley. He trails Gore in every primary state, and joked last week that he is getting so little media attention that maybe “I should hold up a bank.” McCain, the Luke Skywalker wannabe, may still be a long shot to carry his own party’s standard in November. But the extraordinary attention he has received has already gone a long way towards ensuring that the Democrats’ nominee will be Gore. Ell 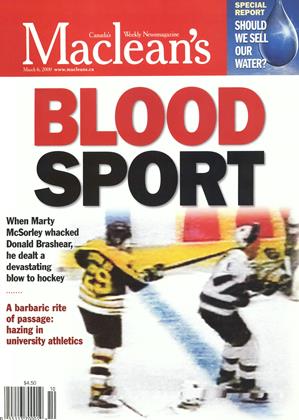