Rebel leader Foday Sankoh likes people to call him the “Lion”—an indication that he sees himself as the most dangerous predator in Sierra Leone. When Macleans visited Sankoh just before he disappeared on May 8, images of the beast adorned the walls of his villa overlooking the capital, Freetown. He even wore blue robes embroidered with the big cats, and others baring their teeth were etched into the wooden walking stick he carried. If lions did not intimidate, there were always guns—and the bodyguards surrounding

him were armed to the teeth. But last week, Sankoh looked anything but fearsome when he was suddenly captured, stripped naked and paraded through the streets of Freetown. “This man is a demon,” said one jubilant onlooker. “We should kill that man today.”

Sankoh’s reign of terror traumatized the country during a 10-year civil war. When word spread that he had been caught, thousands immediately gathered outside the jail and demanded he be put to death. Even so, Sankoh— whose followers in the Revolutionary United Front believe is a “juju man” blessed with magical powers—may yet escape the hangman’s noose. On May 4, his soldiers took hostage 500 UN peacekeepers who were in Sierra Leone to enforce a peace deal Sankoh had signed with the government in 1999. Nearly 200 of the hostages have been released, but his RUF fighters may try to exchange the remaining ones for their leader. And with the government unsure of what to do with the rebel leader, the crisis appears

far from over. “We know the ploy is to have us disarmed and tried for war crimes,” said Sankoh. “But let no one try it.”

If Sankoh fails to negotiate his own freedom, a war-crimes trial could be the very fate awaiting him. The warlord has much to answer for. To terrorize the population into submission, and to cement his control over the rich diamond fields in the eastern part of the country, Sankohs rebel troops kidnapped thousands of boys and girls—the males for fighting, the females for sex. They were fed alcohol and drugs, including crack cocaine, and as part of a mystic initiation ritual, forced to drink the blood of victims and, in some cases, cannibalize them. Facing death themselves if they refused to wield the machete, they hacked off the arms, legs and feet of nearly 10,000 people during the country’s civil war.

Sankoh disappeared on May 8, four days after his troops took the peacekeepers hostage (they were seized without a fight after they tried to take control of the region where Sankohs diamond mines are located). He was finally caught when he wandered out of the hills into a shantytown behind his Freetown villa at 5:30 a.m. on May 17. He asked Kabbah Sesay, a Muslim man on his Sankoh under arrest way to morning prayers, to help

find a taxi to take him to the Nigerian Embassy. Sesay told Sankoh to wait in front of the deserted villa, but instead of getting a taxi, he alerted Mustafa Ka-

mara, a former militia soldier known as the “Black Scorpion.” Kamara quickly rounded up four other men and confronted Sankoh and his bodyguards—sparking a brief gun battle that left the rebel leader slightly wounded in the leg. A photo showed Sankoh naked and crammed into a military vehicle. One captor held him by the neck and another gestured towards the rebel leader as if showing off a prize catch from a big-game hunt. Kamara originally took Sankoh to the headquarters of Johnny Paul Koroma, a powerful local militia leader. He was then turned over to British soldiers, who were in Freetown as part of an 800-man contingent sent to support the UN peacekeepers.

With Sankoh in jail, the people of Freetown danced in the streets. “I am a hero,” yelled Kamara, as his neighbours in the shantytown applauded wildly. Most wanted Sankoh put to death, but one woman suggested he be caged and put on display before being killed. Government troops battling RUF rebels near the front line not far from Freetown were also relieved Sankoh was in custody. “I would have been happier if he were shot dead when they captured him,” said Lance-Cpl. Abu Bakar Jaward, 21. “If it were not for him, I would be a student, not a soldier. So long as he is alive, he will be scheming. This man is evil. He does not deserve to live.”

While many people in Freetown knew what they wanted Sankohs fate to be, it was not immediately clear how the rebels hoped to free their leader. But when government soldiers captured him once before in 1998 when the civil war was raging, the RUF went on the offensive. In January, 1999, they invaded Freetown and, in a three-week reign of terror, hacked off the limbs of hundreds of pro-government supporters and kidnapped 3,000 children. The rebels were finally driven out of the city by West African troops sent in by the United Nations.

Incredibly, under the terms of a peace deal brokered by U.S. special envoy Rev. Jesse Jackson, Sankoh was released from prison. He received amnesty and was not only named vicepresident of Sierra Leone, but appointed chairman of the committee for the management of strategic resources, including diamonds and gold. When Macleans met with Sankoh in his compound, he seemed entrenched in power. There were rumours of a cache of diamonds in the building. And he was surrounded by nearly 300 armed supporters— and nearly a dozen reputed mistresses.

Jackson may once again hold the key to Sankohs future. He has scheduled a peace mission this week to Nigeria, the regional power, which has contributed more than 3,000 soldiers to the 8,900-member UN peacekeeping force in Sierra Leone. He may also visit Liberian President Charles Taylor, one of Sankohs backers, as well as Guinea and Mali, to meet Alpha Oumar Konare, the current chairman of the Economic Community of West African States. But Jackson may not visit Freetown because of the anger some of his comments triggered there last week. Sankoh, Jackson suggested, should be brought back into the political process under the terms of the earlier peace treaty.

But Taylor may have some surprises up his sleeve. He could help release the UN hostages—while leaving his old ally to face a trial. The two first met in the early 1980s at a terrorist training camp in Libya. Taylor took control of Liberia in 1990, and Sankoh launched his rebel campaign against Sierra Leone from a base in Liberia in March, 1991. Sankoh has long been seen as a proxy for Taylor, who wants to control Sierra Leone’s rich diamond mines (the diamonds are sold illegally on the black market in Liberia). To ensure that he retains the mines for himself, Taylor could abandon Sankoh and turn command of the RUF over to Sam Bockarie—a former rebel leader who had a falling-out with Sankoh but remains loyal to Taylor.

Sankohs troops, however, are deeply loyal and may refuse to abandon their leader. They gave an indication of their

determination the day after Sankoh’s arrest, when four RUF fighters were gunned down in an altercation near the city’s airport. A Nigerian peacekeeper and six soldiers from the Sierra Leone army also died in clashes that killed an unknown number of rebels near the eastern town of Port Loko. There is certainly anger within the rebel ranks: a man describing himself as Colonel Bao of the RUF denounced the West over what he called the humiliation of Sankoh—in reference to the fact that he was stripped naked during his capture. “It is the United Nations and Britain,” Bao told BBC radio, “who have derailed the whole peace process.” Human rights experts, however, believe nothing should stand in the way of trying Sankoh for crimes against humanity. David Malone, a Canadian diplomat with Canadas UN mission, who also heads the International Peace Academy in New York City, said the United Nations should send a clear message that it will not tolerate such violence by helping to bring Sankoh before an international criminal court. Such a trial might also help demystify Sankoh. Ian Smillie, an Ottawa consultant who co-authored “The Heart of the Matter,” a report on the Sierra Leone diamond trade, says many of Sankoh’s followers believe he has supernatural powers. But Smillie said once they see he can’t “change bullets into water, a lot of them will want to give up their guns.”

Another group of Canadians is also anxiously watching events in Sierra Leone. Executives with a number of Canadian diamond-mining firms hope Sankoh’s departure will finally allow them to return; most left in May, 1997, when Sankoh’s forces overran the diamond fields. “We’d love to go back in,” said an executive with AmGen Minerals Ltd. of Toronto. “I’d take my pail and shovel and go mining diamonds.” Whether Sankoh the “juju man” can cheat the hangman for a second time could determine whether the miners return to the diamond fields. 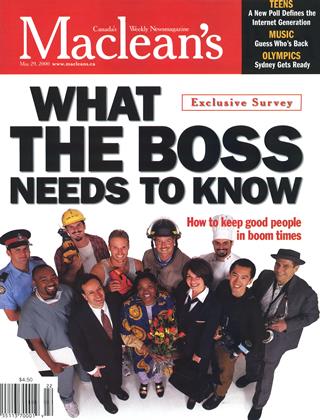