Dick Tomlinson has devoted more than 50 years to McMaster University. But two weeks ago, the 76-year-old retired chemistry professor handed $64 million in cash and stock to McGill, the university where he earned his PhD in 1948. Having set the record for the largest philanthropic gift in Canadian history, he headed home by train to Hamilton and his lab—“the place where I’m happiest.” Really? Then why McGill? “I’ve made many donations to McMaster, and education,” the notoriously frugal professor reminds, “some in a roundabout way.” No doubt. These include a significant contribution to the McMaster Museum of Art, and another to the Canadian Institute for Advanced Research, which funded a physics professor at the university. And last spring, he thrilled Bishop’s, bestowing $4 million on the university where he received his undergraduate degree in 1943.

But Tomlinson saved the lion’s share of his fortune for McGill. A founding director of Gennum, the world’s leading maker of hearing-aid microchips and a major supplier of chips for digital signal processing TV equipment, Tomlinson pledged his private company to his alma mater a decade ago. Over the years, both former principal David Johnston and his successor, Bernard Shapiro, have worked with Tomlinson to determine the focus of his extraordinary gift. One thing was clear: Tomlinson was not interested in bricks and mortar. “I have a vision of a great university,” says Tomlinson, “centred on great faculty and great students. But politicians are interested in getting votes, and all moms and pops are interested in getting kids into universities. Universities in Canada have prostituted themselves by taking extra bodies. But you can’t mix the nerds with the intelligentsia and treat them the same way.” He pauses. “Maybe I could have chosen better words.”

No question. But we get the point: Tomlinson wants to invest in gifted individuals who can bear significant fruit for the country. Here is what his donation begins to makes possible: the endowment of six chairs at $2 million apiece; the creation of 42 endowed fellowships; a fund to encourage young surgeons in their research; a $4-million boost to scholarships; a major fund for library services; plus an innovative teaching fund to develop new techniques in the sciences.

The Tomlinson gift sends a powerful signal: if governments can’t fund the quality agenda on their own, private partners will. Partners like mining magnate Stewart Blusson, who gave $50 million to UBC, or Col. Sam McLaughlin.

Before his death in 1972, the pioneering automaker launched a major charitable foundation to promote, among other things, medical research and education. But he had one stipulation: the money had to be distributed no later than next year. “Let’s wind it up,” he said. “Who will remember Sam McLaughlin in 2001 ?”

As it turns out, more people than he could have possibly imagined. This week, the University of Toronto announced the establishment of the R. Samuel McLaughlin Centre, a $ 150-million initiative aimed at advancing new strategies for the diagnosis, treatment and prevention of disease. The centre, which will integrate cutting-edge research and inno-

vative training, should help vault Canada to the forefront of

biomedical and genetic research. What’s remarkable is the scope and vision of the project. Jump-started by a $50-million donation from the McLaughlin Foundation, the centre has the commitment of a further $50 million from the university and four of its teaching hospitals. That investment, in turn, has leveraged a further $50 million from a government partner, the province’s Ontario Innovation Trust. Together, this represents the largest combined commitment to medical research and education in Canadian history.

years to shape. Knowing that the foundation was looking for

a home for its investment, U ofT president Rob Prichard retained Donald Kennedy, former president of Stanford University, as a consultant. His job: to identify the best international models for biomedical research and training. Kennedy concluded that a centre of true distinction demanded a minimum commitment of $100 million.

That homework has more than paid off. The $50-million McLaughlin gift, having attracted a further $100 million, will have a transformative impact on the university and, ultimately, on public health. Most critically, the university can be confident that it will attract and retain world-class researchers. Like the Tomlinson gift, the McLaughlin donation represents a major reinvestment in brainpower.

Tomlinson, who is childless, has promised he will continue to give, saying simply: “I don’t have a yen for a 747.” In the past week, his phone has rung off the hook. One caller asked if he was interested in becoming a Christian. His reply? “I told them I already was a Christian.” A Christian who has just raised the bar for philanthropic giving. 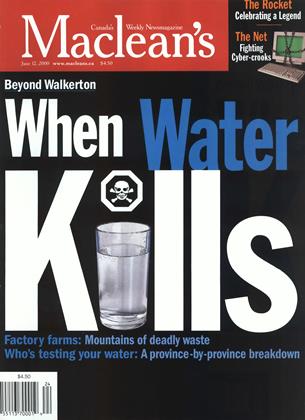