Russian President Vladimir Putin is facing mounting international criticism over what many analysts say is a clear attempt to crush free speech in his country. The latest accusations flew after prosecutors in Moscow arrested Vladimir Gusinsky, Russia’s most powerful media mogul. Gusinsky, who owns the country’s only independent media network, was charged with fraud and released on bail after spending almost three days in prison. His arrest came barely two weeks after Putin unveiled his plan to concentrate more power in the Kremlin by building what he called a “dictatorship of the law.” Gusinsky had been openly critical of Putin and his handling of the savage war in Chechnya.

While in Germany on a diplomatic tour, Putin acknowledged that the arrest may have been an overreaction, but denied it was politically motivated. But in Washington, U.S. deputy secretary of state Strobe Talbot said the arrest fits an emerging pattern in Russia that “resonates muscle, power and intimidation.”

To mark his 18th birthday this week, Prince William poses for an official photograph wearing a Union Jack waistcoat. He said he enjoyed attending Eton without constant media attention, adding: “I hope I can enjoy the same freedom at university.”

At the urging of Pope John Paul II, Italy pardoned the Turkish gunman who tried to kill the pontiff in 1981 in St. Peter’s Square. Mehmet Ali Agca, 43, was returned to Istanbul, where he was jailed for eight years (aTurkish court had sentenced Agca to death for the murder of a newspaper editor, but he escaped in 1979). Some investigators believe, but it was never confirmed, that Agca tried to murder the pontiff on behalf of the KGB, which feared eastern European repercussions from the Pope’s defiant anti-communist stance.

An attack in Montenegro

Serbian opposition leader Vuk Draskovic was shot twice by gunmen outside his home in Montenegro. Incredibly, Draskovic, who heads the leading opposition party, the Serbian Renewal Movement, suffered only two slight head wounds in the attack and was quickly released from hospi-

tal. Last fall, Draskovic accused Serbian President Slobodan Milosevic of rigging a car accident that Draskovic survived, but in which his brother-inlaw died. Draskovic has been agitating for early elections; last month, the government closed his Studio B television station in Belgrade. Fearing for his safety, Draskovic then fled to neighbouring Montenegro, Serbia’s sister republic in the Yugoslavian Federation.

British soccer hooligans have a wellearned reputation for violence. But last week, at this year’s Euro 2000 soccer tournament, Dutch police said they did not make a single arrest. Their explanation: British supporters were smoking marijuana, which is legal in Holland, and it seemed to calm them down. In Belgium, however, police arrested several hundred British supporters after a rampage in Brussels and battles with German fans in Charleroi.

A private army of the upper castes claimed responsibility after gunmen dragged low-caste residents of the village of Miapur in eastern India from their beds and killed 34 of them. The attack appeared to be retaliation for the killing of 11 upper-caste villagers a week earlier. Miapur is in Bihar, one of India’s poorest states where groups representing the upper and lower castes are waging a war of attrition.

Two days after a bull shark attacked and badly injured two swimmers off the Alabama coast, another shark attack was reported in Florida’s Pensacola Bay. Boaters on a six-metre pleasure craft saw a large shadow in the water minutes before the shark ripped off the boat’s swim platform.

Ten men are expected to be charged following attacks on at least 44 women in New York City’s Central Park after the Puerto Rican Day parade. The victims were assaulted by roving packs of men who sprayed them with water and ripped off their clothes. Police have been heavily criticized for not responding quickly enough to the emergency.

Following the advance of Ethiopian troops deep into Eritrea, the two countries are expected to sign a peace deal on June 18—ending the two-year border war that has displaced more than 500,000 people. The peace plan calls for Ethiopian troops to withdraw and a United Nations peacekeeping force to patrol a border zone inside Eritrea. 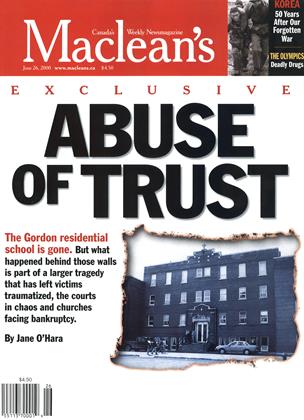