Contaminated water brings death and outrage to an Ontario town

Judi Doerr was on the brink of tears. “I’m just so tired, so frustrated,” she said, her voice quavering.

Doerr and her two children, Matt, 10, and Bayley,

Ont., who had to cope last week with the shocking news that their town’s water supply was contaminated by a deadly strain of E. coli bacteria. By week’s end, the outbreak in the picturesque farming community 150 km northwest of Toronto had killed five, put dozens in the hospital and stricken more than 1,000 with nausea, severe cramps and bloody diarrhea. But Doerr said that if she and her family have remained healthy so far, it’s thanks mainly to good luck. She learned from a friend who works at a local nursing home, where several elderly residents became ill, of rumours circulating about the town’s water supply. As a result, Doerr began boiling her family’s tap water on May 20—a full day before Dr. Murray McQuigge, the medical officer of health for the Bruce-Grey-Owen Sound Health Unit, issued his boil-water warning. “With two kids and two big dogs,” she recounted, “as soon as I finished boiling one big pot, I had to start the next.”

Four days later, the municipality and local businesses began handing out free cases of bottled water. That eased Doerr’s workload somewhat. “We’re poor,” she says, “and I don’t have a car, so I had to pull the water home in the kids’ wagon.” But what really angered and upset her was the claim that some local officials were aware of the problem five days before it became public and did not speak up. In a strongly worded statement he prepared in connection with the chief medical officer of Ontario, McQuigge told a news conference that the Walkerton Public Utilities Commission had sampled the water on May 15. On May 18, he said, the PUC received a fax from the private lab that had tested the water—indicating it was contaminated. The PUC finally acknowledged on May 23 there was a problem, McQuigge said—when he presented the results of his own independent water tests. (A PUC spokesman said the fax did arrive, but the recipient did not understand its seriousness.) McQuigge’s statement left Doerr, whose children have classmates among the sick, angry with her town’s officials. “I want to grab them by the throat,” she said, her hands gesturing in a circle, “and ask them, are their families ill? It’s maddening.” Later, Garry Palmateer, president of GAP Enviromicrobial Services Inc., a London Ont.-based company that tested Walkerton’s water between 1996 and the beginning of May, said tests detected coliform bacteria, an indication that potentially contaminated surface waters were seeping into the towns wells, as early as January. He said he notified municipal authorities and an Ontario environment ministry office in Owen Sound, assuming the ministry would follow up with the town to ensure it was fixed.

A well-groomed Victorian-era town nestled among the rolling green hills of southwestern Ontario, Walkerton does not look like the sort of place where a deadly pollutant would strike. There are no congested highways, no giant industrial smokestacks spewing grey haze. Instead, the sparkling Saugeen River meanders through the town and surrounding countryside, a popular region for such recreational activities as fishing and canoeing. Elsewhere, on the areas prosperouslooking farms, dairy and beef cattle contentedly graze. Ironically, that bucolic beauty may be at the root of Walkertons problems; investigators suspect run-off from cattle manure as a possible source of the E. coli in the water.

However the contamination occurred, the disaster has brought out the best—and the worst—of small-town Canada. Friends and neighbours have gone out of their way to be kind, whether offering a steadying hand at a funeral or simply asking “How are you?”—and meaning it. Those in nearby communities such as Hanover, where the water is safe, are letting Walkerton residents live with them until they hear the all clear. Companies and local businesses have donated needed supplies, while doctors and nurses from across Ontario began arriving at weeks end to relieve medical personnel becoming fatigued by the ordeal. But at the same time, the rumour mill—which has plenty of grist in a town where

so many people know each other by first name—went into high gear. Most damaging was speculation about who was to blame, an issue the courts may ultimately decide.

Not surprisingly, the repercussions are spreading far beyond Walkerton, where schools have been closed and some restaurants have shut their doors until the crisis is over. Canadians everywhere are asking whether a similar tragedy could unfold in their community—and in many cases the answer is yes (page 37). The town of Freelton, Ont., near Hamilton, issued a boil-water warning on Saturday after trace amounts of E. coli were detected in its water supply, but there were no indications anyone was affected. The events in Walkerton, meanwhile, have already sparked a $1-billion class-action lawsuit, with two more in the works—and three major investigations. Ontario Environment Minister Dan Newman has asked officials from his own ministry to try to determine how the disaster occurred. The Ontario Provincial Police has launched an investigation as has the coroners office. At the same time, opposition MPs have blamed Mike Harris’s Conservatives, saying the incident is the inevitable result of his government’s policies, including budget cutting, downloading and amalgamating.

The first hint of the calamity came when Dr. Kristen Hallet, a pediatrician in Owen Sound, saw two young patients on the same day with the same uncommon symptom: bloody diarrhea. Both were from Walkerton, 30 km to the south. Hallet ordered blood tests, but rather than waiting the 48 hours for the results—and fearing the two had become ill from tainted food they may have eaten at the same place—she notified McQuigge’s office. He launched his investigation, but not in time to stop an epidemic. At week’s end, Hallet’s first two patients were recovering at home, but others did not fare so well. Two people died while in hospital in Walkerton last week and three others died after being airlifted 150 km south to the London Health Sciences Centre in London, Ont. They were among the 11 patients who were transferred to other facilities, while the 49-bed Walkerton hospital admitted eight, treated almost 400 in its emergency department and fielded countless telephone calls.

Health officials fear there could be more to come. The main culprit has been identified as Escherichia coli 0157:H7, a lethal strain of the common, usually harmless E. coli bug found in the intestinal tract of humans and animals. But 0157:H7, which often originates in the intestines of healthy catde, can result in permanent kidney damage or be fatal to humans if they ingest it in undercooked hamburg, unpasteurized milk or tainted water. After an incubation period of two to eight days, an infected person will develop symptoms,

including diarrhea, that last up to 10 days. Given the staggered times at which people started boiling water, new cases could still show up all this week. There is little doctors can do for most patients, other than making sure they get plenty of fluids, either orally or intravenously, and letting the illness run its course. But in some people—children and the elderly are most at risk—further complications may arise when the bacteria creates a toxin that results in hemolytic-uremic syndrome, a potentially fatal kidney disease.

On a cool and windy spring evening last week, the mood at the Walkerton Community Centre, usually the scene of a great deal of fun, was sombre. The ice in the arena was long gone; instead, palettes of bottled water covered part of the rink’s floor. Outside, teens from a local soccer team loaded cases of the water into cars as a small but steady stream of drivers pulled up. Randy Willick, a grain wholesaler and one of the team’s coaches, seemed proud of the young people who gave up their practice to help out. “The earlier kids do volunteer stuff, the better,” he said. Barbara MacArthur, a homemaker overseeing the volunteers because, as she put it, “I just couldn’t sit at home,” nodded in agreement. Her attention was diverted as a tractor-trailer from Zellers pulled up and the

driver asked where to unload 5,000 3.6-litre jugs of bleach. The retailer, which also donated teddy bears for sick children and some of the palettes of water, was providing the bleach to residents to help purify their washing water.

Earlier in the day, Environment Minister Newman visited another windy locale, Deep Well 7. With only a modest brown-brick building covering the 60-m deep artesian well dug in 1988, the site seemed unremarkable—except for two things. One was the overwhelming smell of chlorine as work crews continued to flush the system. Second, as one of the town’s seven wells supplying water, it was a possible source of the contamination. But Newman brisded at reporters’ suggestion that the crisis could have been a result of the Conservative government’s downloading of services on to municipalities. He noted that Walkerton always had operated its own water system.

Newman, however, may be harder pressed in the weeks to come to explain his own ministry’s role in the tragedy. According to NDP Environment critic Marilyn Churley, since coming to power in 1995 the Conservatives have slashed the environment ministry’s budget by 40 per cent. That resulted, she says, in the ministry cutting a third of its staff and closing regional offices, including four water-testing laboratories.

Premier Harris, who visited Walkerton on Friday, denied that government cuts had played any part in the disaster. But critics say cutbacks and downloading have resulted in a weakened system of checks and balances. Since privatizing water testing in 1996, the government has required private laboratories to report the results only to the municipality that requested the tests. (Under the old system, the government laboratories that did most of the water testing also had to report health concerns to a district manager in the ministry, as well as alert medical officials.) After persistent questioning, Newman acknowledged to reporters that if the government had still been in charge of testing, the boil-water warning would have been issued sooner. “Of course, we would have, that’s what any responsible person would do,” he added. But what would have or should have happened are cold comfort to the people of Walkerton, grieving over what did happen—and praying that such a tragedy will never occur again.

With Cheryl Hawkes in Toronto 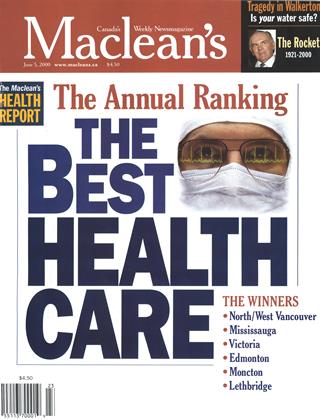