$360 million in damages to be paid by the Walt Disney Co. The jury unanimously accepted the pair's assertion that Disney stole their idea for a sports complex, which they first pitched in the

late 1980s. Disney went on to build a $ 150-million complex that opened at Walt Disney World in 1997. The ruling “says to America that small companies can get justice,” said the pair’s lawyer, Johnnie Cochran. Disney plans to appeal the ruling.

Born: Wayne Gretzky, 39, and his wife Janet Jones Gretzky, 38, welcomed a fourth child and third son on Aug. 2. Tristan Wayne Gretzky was born in Los Angeles weighing seven pounds, eight ounces. The Gretzkys waited until mother and son were released from hospital before announcing the news last week. The couple’s other children are Paulina, 12; Ty, 10; and Trevor, 7.

appeared in 88 movies (including 1947 s The Farmer’s Daughter, for which she won a best-actress Oscar). After retiring in 1963, when TV’s The Loretta Young Show ended its 10-year run, she devoted herself to Roman Catholic charities. She died in Los Angeles of ovarian cancer, at 87.

Reappointed: A Swimming Canada panel has reinstated Shauna Nolden, 27, as part of the Canadian coaching staff for the Olympic Games in Sydney, Australia, next month. Nolden’s original appointment was voided in July after members of the team argued her appointment was biased and that better coaches had been overlooked. Nolden

coaches at her family’s private swim club in Toronto and has World Cup circuit experience. She will be responsible for five male and female members of the 36-member team.

Died: In 1957, when Carleton University introduced Robert McDougall’s brainchild—a graduate program in Canadian studies—it was met with skepticism. Forty-three years later, similar programs exist in 25 Canadian universities and elsewhere around the world. McDougall, who fought in the Second World War with the Seaforth Highlanders before being gunned down in Sicily, also promoted Canadian literature in a time when literary studies centred mainly on British authors. McDougall died in Ottawa at 82.

Charged: Malaysia’s former deputy prime minister Anwar Ibrahim, 53, was found guilty of sodomy and sentenced to nine years in prison. The onetime rising star in Asian politics—and bitter opponent of Prime Minister Mahathir Mohamad—maintained the charges were trumped up to remove him from power. Ibrahim’s lawyers plan to appeal.

Retiring: Thought by many victims’ rights groups to be too forgiving to criminals, Ole Ingstrup, 59, the commissioner of Corrections Canada, is stepping down after eight years. Ingstrup denied that a recent controversy over an alleged 50-per-cent quota for the release of prisoners back into the community played a role in his decision.

was the last surviving soldier of the 42nd Battalion (Royal Highlanders of Canada), also known as the Black Watch, who was at Vimy Ridge in 1917. The Black Watch is allied with the famous Scottish regiment. After the war, the British-born de Gruchy worked in the insurance office of Canadian Pacific Railway for 48 years—and often remarked that he just missed the 50-year service mark that would have given him a free rail pass. He never owned a car. He died in his sleep in Montreal, at 104. 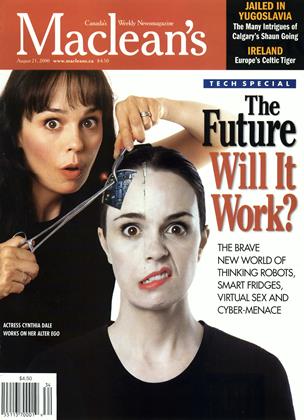