No issue has dominated Canadian polls and politics in the past decade like the state of the nation’s health-care system. Or inspired such an array of competing, often contradictory, prescriptions for a solution. Even as provincial premiers gather next week to finalize a joint health-care proposal to the federal government, those who would cure medicare continue to offer radically divergent diagnoses of the disease. Two current books on the problems with health care illustrate that dilemma. For David Gratzer, a newly minted 25year-old physician from Winnipeg and author of Code Blue, the entire system is mortally ill, sucking up insupportable cash infusions only to lurch from crisis to crisis. But healthcare insider Michael Decter—a former Ontario deputy minister of health who is now chairman of the Canadian Insti-

tute for Health Information—dismisses such talk as ideologically driven alarmism. “The health-care system does need modernization and investment,” allows Decter, author of Four Strong Winds. “But it’s a pretty good system, as good as anything on the planet. Medicare is one of the things we have done well as a country.”

Not that the two writers are far apart in their analyses of the forces battering medicare. For more than a decade, high-tech, high-cost medicine has been colliding with the escalating health-care demands of an aging population.

“The baby boomers discover arthritis,” is Gratzer’s sardonic summary of the situation. The results, as governments struggled to balance their budgets in the 1990s, have been a shock to Canadians: hospital closures, delisted services, lengthy waiting lists, overcrowded emergency rooms, doctors and nurses head-

ing south—and a system still costing $86 billion a year to run. The “four winds” that Decter sees pressuring the system—changing public expectations as to speed and quality of care, the financial crunch, developments in medical technology and the new emphasis on health promotion— amount to much the same diagnosis.

Gratzer and Decter even share some views on what not to do. User fees, they agree, won’t help. The relatively low charges suggested by their promoters will not raise enough money to make any real difference, Gratzer says, considering that recent increases in government funding—cut back in the early 1990s but now at record levels—has had little impact on waiting lists. What’s more, argues Decter, the only people such fees are likely to discourage from medical visits are the poor. For middle-class Canadians, he says, “after you’ve paid $29 for parking at the hospital, what’s $5 more?”

That is the two authors’ last point of agreement. Decter sees the current hard times as a result of outside forces, not a systemic failure. In his view, when Canadians emerge from the revolution that is remaking health-care systems around the world, much of what worries them will be gone. The genetic revolution will dramatically improve people’s health. A viable home-care system will replace the hospitals that cashstrapped provincial governments closed as soon as medical advances—notably better drug treatment and less invasive surgical techniques—let them. Doctor groups providing services around the clock will drastically reduce the need for visits to emergency wards. Nurse hotlines, and above all, the health information available over the Internet, will cut down on trips to the doctor.

Medicare can work well again, Decter argues, as well as it did when Canadians were younger and healthier and standard medical care was less expensive. In fact, Canadians must make it work because it is the only means of preserving what he calls “the solidarity principle.” By that he means the concept, shared to some extent by every advanced nation except the United States, that health-care costs should be borne by society, not individuals. For

Decter, a public system is necessarily a government-run system. That means control by a cadre of bureaucrats, whose most important function has shifted from providing access to medical care to managing the demand for it. Decter promotes a positive approach to that task, focusing on providing information to patients so they can avoid unnecessary requests for tests or other procedures.

But Decter, a career bureaucrat, also gives a nod of approval to more aggressive management measures, such as identifying people at risk of heart disease, diabetes or other disorders and seeking to prevent those problems from developing. In Four Strong Winds, he does reject “negative demand management,” a common health-care euphemism for allowing waiting lists as an alternative to making new expenditures. Still, queues may become permanent fixtures for minor procedures, Decter admits, to help cap health-care expenses. He carefully distinguishes between boomers’ age-related needs and their wants—in terms of speed and quality—which he sees as byproducts of the consumer revolution that has transformed the rest of the economy. “You can’t pay for everything the system can generate,” he concludes, “but you can pay for what the system needs.”

To Gratzer, the solution is not in more government involvement but in empowering the patients themselves to make critical health-care decisions. In a government-run system where no one has to worry about his or her own direct payment, the demand for care is infinite, asserts Gratzer in Code Blue, recipient of the right-wing Donner Foundation’s $25,000 prize for the year’s best book on Canadian public policy. To the author, that unfettered demand means there will never be enough public money available to pay for it all. So professional managers, usurping decisions that should belong to patients and doctors, will control healthcare availability—and by crude means. If the system doesn’t

change, Gratzer says, government will be ever more agressive in capping doctors’ salaries, increasing waiting lists and even stopping payment for some procedures. The alternative, he suggests, is to restore financial control—and responsibility— to patients.

As a means to that end, Gratzer proposes a concept pioneered by some American insurance companies, known as Medical Savings Accounts. MSAs would provide Canadians with a publicly funded cash pay| ment (perhaps $1,000, but I the exact amount would be œ tailored to individual circumstances) for minor medical expenses. Crucially, a portion, tailored to individual circumstances, would be dedicated to catastrophic-illness insurance that would cover annual bills in excess of $2,000. Patients could spend the rest of the money on the doctors, tests, drugs and therapies of their choice. They would be liable from their own pockets for any difference between the MSA amount and the point at which insurance kicked in.

That’s one incentive to be frugal with the money in the account. Another is that patients could roll any money they hadn’t spent by year’s end into the next year’s MSA—and continue saving it to cope with the increased health-care costs of old age. With the freedom to shop around, Gratzer argues, Canadians would foster price-lowering competition and make delisted services and waiting lists things of the past.

Gratzer acknowledges the difficulties associated with MSAs, not least being the upheaval and expense of changing over to such a system. But he believes the results would be worth the effort. Decter counters that MSAs would be hugely expensive to administer, hurting medicare in one of its current advantages—the lower administrative costs of a single-payer system.

Given all the evidence of Canadians’ profound attachment to medicare as a right of citizenship, in particular to its universal availability without charge, the future of health care seems more likely to accord with Decter’s vision than Gratzer’s. But as he begins a residency in psychiatry at Toronto’s Mount Sinai Hospital, the young doctor disagrees. “I think change in the health-care system will be like fixing the federal deficit,” he says, referring to decades of continuous overspending before Ottawa finally got serious about balancing its books in the 1990s. “We can’t deal with the present crisis in medicare, so there will be dramatic change—the question is not if but when.” EH 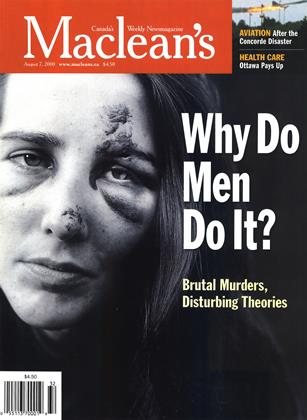