The two infants are known only as Jodie and Mary, names the British courts invented to protect their privacy. They are tiny twins, born on Aug. 8 at St. Mary's Hospital in Manchester. But despite their brief lives, the little sisters have managed to generate enormous controversy, enough to prompt two of the three Appeal Court justices hearing their case to confess to sleepless nights pondering how to resolve a tragic puzzle without precedent in English law. “Save Jodie but murder Mary,” said one of those judges, Lord Justice Ward, in an address last week to a battery of barristers involved in the affair. “I put it starkly, but that may be what you are inviting the court to do.”

Jodie and Marys problem is that they are joined at the lower abdomen. Mary has no effective heart, no functioning lungs and a brain her doctors describe as “very, very primitive.” The infant is alive only because she is attached to her sister. Jodie, whom the doctors term “bright and alert,” supplies Mary with oxygenated blood from her own heart and lungs. Surgically separated from her sister, Jodie stands, according to the Manchester medical team, a 95-per-cent chance of living a normal life. The separation would, however, kill Mary. Without it, doctors say, both girls are likely to die within six months as a result of the strain on Jodies heart.

Ever since the two girls were born, the doctors at St. Marys have been urging the girls’ parents to agree to the separation. But the parents, identified in court only as devout Roman Catholics from a remote community in southern Europe, have resisted, largely on religious grounds. On Aug. 25, the medical team won a decision in England’s High Court allowing the separation.

The parents, in an effort to overturn that ruling, took their case to the Court of Appeal. Neither were in court last week when those proceedings opened. But the parents, through their lawyer, submitted a written statement. “We cannot,” it read, “begin to accept or contemplate that one of our children should die to enable the other one to

survive. That is not God’s will. We believe nature should take its course. Everyone has a right to life, so why should we kill one of our daughters to enable the other one to survive?”

For the three Appeal Court justices, the case raises a host of complex legal, religious and ethical issues. Lord Justice Brooke, sitting with Lord Justice Ward and Lord Justice Walker, told a hushed courtroom last week that he had been searching for legal precedents, without much success, until the early hours of each morning. “What is this creature in the eyes of the law?” he asked in reference to Mary, whom he noted “had no ca-

pacity to produce oxygenated blood.” Lord Justice Ward, admitting that he, too, had been kept awake grappling with the issues, noted that there were “astonishingly difficult” questions of criminal law involved. “The moment the knife goes into that united body, it touches the body of unhappy little Mary. It is in that second an assault. You fiddle about, rearrange the plumbing. An hour later you put a clamp on the aorta. You cannot pretend that is not actively engaged in assaulting her integrity. For what justification? None of hers.” The courts assigned lawyer Judith Parker to represent Jodie’s interests.

“We must look at it not that someH thing is being done to Mary to hasten the end of her life,” she argued ¡I in response, “but that something is being done to Jodie in order to restore to her her own integrity and jg bodily system.” Parker raised the possibility that, in law, Mary is in effect assaulting Jodie’s body by using her heart and lungs. Jodie, in H turn, has the right, through her legal guardians, to withdraw her consent to provide blood and life support for her sister.

The court even granted the doctors involved in the case anonymity I after lawyers for St. Mary’s reported receiving hate mail. One of the medical team, identified only as Dr. B, testified that if the girls stayed together and even somehow managed to survive, their prospects were bleak. “There is little chance,” he said, “of either of them being able to sit up or walk. One is very likely to have to the drag the other around, whether consenting or otherwise.”

After three days of testimony last week, the Appeal Court justices adjourned the case until this week. In the meantime, Jodie and Mary remain in stable condition at St. Mary’s. In contrast to her state immediately after birth, Mary is beginning to be more active. Her doctors report that she now opens her right eye occasionally and has begun to suck, even though she cannot feed. Jodie is active, alive and kicking, just like any normal month-old baby. CD 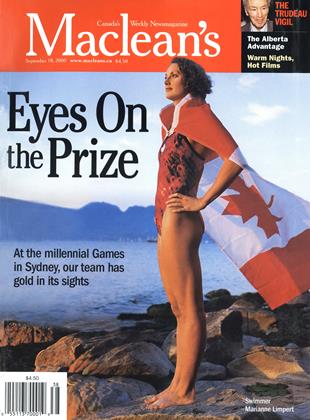