Why are these men smiling?

All politics, all the time: The PM moires ahead! Day soaks his own head! Clarke loses two heads! And George W. Bush— why the wrong head?

Jean Chrétien: Triple-threat man. He cuts a health-care deal with the provinces, swipes two MPs from the Tories, and Paul Martin appears set to stick around. Just don’t try to tell the PM to quit while he’s ahead.

Stockwell Day: He steals a page from PM's Look-How-Buff-I-Am playbook and shows off on Jet Ski in skintight bodysuit. Stop this trend before Joe Clark hops on.

Joe Clark: He wins byelection but loses two MPs, and his party president quits amid claims of treachery. In short, its still the same old s-Tory.

Luden Bouchard: Says federalprovincial unity on health-care deal makes him “very happy.” So will an apple a day keep sovereignty away?

^k George W. Bush: He denies suggestions that his repeated malaprops are the result of dyslexia. He’s actually just practising how to have a conversation with the PM.

Searching cyberspace for an intelligent critique of Canadian politics? Or maybe you’re looking to vent frustrations with Toronto traffic or Montreal language wars in an online forum? Don’t bother to go to www.vancouversucks.com, www. torontosucks.com, or www.montrealsucks.com. Those domain names all lead to one Web site: the U.S.based www.sucks.com. That site makes no mention of Canada on its main page-and none of its discussion groups have anything to do with Canada. The only consolation for those looking for new proof of American imperialism are a few

cross-border barbs-grammatical flaws and all. Among them: Canada is “a country that a majority of its land mass only sees the sun a couple months out of the year,” and has “the dumbest accents of all.” Another American-run site, www.canadasucks.com, at least offers some straight-up Canadabashing. The owner of this onewhich is unrelated to the other group-offers a tactical map of “The Invasion of Canada 1775 to 1776” dating back to the American Revolution. The site’s plea: “Invade Canada. All Canadian citizens should crawl across the border to Washington D.C. and beg for asylum.” C’mon, all you Canada bashers, you can do better than that.

Tiger’s tale by the numbers:

These numbers help tell the story of both Tiger Woods’ stunning Sept. 10 victory at the Bell Canadian Open in Oakville, Ont., and the manner in which he dominates golf:

Number of golfers to win the Canadian Open, British Open and U.S. Open in a single year (Lee Trevino in 1971 and now Woods)

21g^ Yards from the fairway bunker-over a the water-to the pin on Tiger's amazing 6-iron approach to the 18th hole, solidifying his one-stroke victory at the Canadian Open

Shots under par at the U.S. Open and British Open-both tournament records

Shots under par for seven tournaments this summer

Age and his career wins

Millions of dollars in tournament earnings this year

Woods’ world ranking. Also his rank in the categories of scoring, putting, eagles and birdies.

“The table was set and along came the Prime Minister and took away the roast beef.”

-Alan Lenczner, lawyer for Conrad Black, complains to the Ontario Court of Appeal over the manner in which Jean Chrétien blocked the media magnate from receiving a peerage from Britain for which he had been recommended

“Having glimpsed a little of Australia through the Olympics, we might become sufficiently enamored to begin at last to take some note of it. It is certainly an exciting prospect. Then— who knows?—we might even begin to pay attention to Canada.”

-Author Bill Bryson, writing in The Wall Street Journal, bemoans Americans’ indifference to people and events beyond their borders

The play’s the thing-and cash

Remember that old saw about how “time is money”? Its never more true than in the case of children participating in recreational sports. A Statistics Canada study released last week shows that 73 per cent of children who come from families with incomes of $80,000 or more were active in organized sports in 1998. By contrast, only 49 per cent of kids who come from households with a total in-

come of less than $40,000 took part in such sports in the same year. Overall, about 2.2 million (54 per cent) of children aged 5 to 14 regularly played some form of organized sports. Statis-

tics Canada also found that 86 per cent of children played organized sports when their parents were themselves involved as a volunteer. Soccer remains the No. 1 choice of children aged 5 to 14, with 31 per cent of all athletically active children in Canada enrolled in the world’s most

popular sport—which is also one of the cheapest to play. Proof that money can’t buy everything. 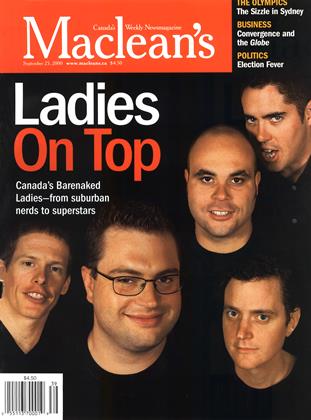