No doubt about it: George Cope, chief executive of Clearnet Communications Inc., the wireless phone company featuring lizards and leaping frogs in its ads, is a creature of the digital age. Take his hectic schedule over three days last week. First, he signed off on the largest deal ever struck in the telecommunications business in Canada—a $6.6-billion merger with Telus Corp. of Burnaby, B.C., Western Canadas mega-phone company. He nabbed the top job at the newly formed wireless entity, which puts Telus’s heft behind Toronto-based Clearnet’s sprightly national presence and creates a formidable competitor to BCE Inc.’s Bell Mobility and Rogers AT&T Wireless. Then, he closed on the sale of his home in Ajax, Ont., bought a new one in the same Toronto suburb and, with his wife and three children, moved house. He even fit in a canoe ride on a lake near his home.

“You know how fate will get you,” said Cope, 39, speaking as movers carried furniture and boxes into the van at the curb. “It all came together just at the same time. It was a strange

happening.” Cope, naturally, was talking on a cellphone— a digital super-gadget that shows why he never lost touch with the office. The palm-sized Motorola flip model includes a phone, a two-way radio with 1,500 km range, a pager, e-mail, and a micro-browser that allows Cope to surf the Internet and, if he wants, check stock prices, weather and news, find phone numbers, and buy CDs and books. Normally his home is equipped with a landline phone—you know, the oldfashioned kind with a plug-in cord, now packed in a box— but Cope is also at the leading edge of the 22 per cent of Canadians who use mobiles, a number the industry expects to more than double by the end of 2003.

Canadians, who enjoy one of the best landline systems in the world, are only beginning to warm to cellphones. Canada ranks lowest in usage among 16 industrialized countries listed by top supplier Nokia Inc. (No. 1 is Finland, Nokia’s home, where more than 60 per cent of the population uses them.) But Canada has just passed what’s known as the tipping point

of 15to 20-per-cent penetration, after which consumers suddenly begin to snap up the mobile units at a rapid rate. “Below that threshold, people tend to regard mobiles as costly gadgets for businesspeople; above it, penetration rates escalate rapidly,” says Chris Potter, a wireless expert at Convergence Consulting Group Ltd. in Toronto.

Moreover, a new generation of small wireless products—units that will send and receive e-mail, order the groceries, control the TV and log onto the Internet—is about to explode into the market in Canada. Right now, the key players are positioning themselves to be ready when that boom happens—which is precisely what the Telus-Clearnet deal is all about. “Wireless is the next big gold rush,” says Iain Grant, a consultant with the Brockville, Ont.based Yankee Group in Canada Inc.

Telus, once Alberta’s sleepy, bureaucratic telephone company, is on a mission to reinvent itself. Two years ago, it merged with BC Telecom Inc., creating a western power base. Then it opted out of the Bell Canada-dominated cross-country telephone alliance known as Stentor and set its sights on competing nationally—against Bell, among others. In June, Telus acquired a strategic 70-per-cent interest in QuébecTel, a small player in the Quebec market. Even so, Telus investors remained “underwhelmed,” says Grant.

Enter 38-year-old Darren Entwistle, named Telus’s chief executive and president on July 10. Since his arrival from Britain, where he most recently held a senior post at telecom giant Cable & Wireless Communications PLC, he has laid out a 100-day battle plan and, impressively, pulled off the Clearnet deal. “The thing that Entwistle seems to have brought is a sense of urgency,” says Grant. For Entwistle, a Montreal-born Canadian who has spent much of his career overseas, the urgency was driven by a scheduled federal government auction this fall of highly coveted telecommunications bandwidth, or spectrum—the “real estate” of wireless communications, like frequencies for radio stations. Telus, Entwistle decided, would be better off buying a company that already had a substantial amount of spectrum rather than bidding against other telecom firms in a battle that could both escalate prices and leave Telus with less capacity than it needed for a national presence. “I can tell you there is no guaranteed outcome of the auction process,” Entwistle told Macleans.

“It’s better to get it done in advance.”

Clearnet, with close to the maximum bandwidth allowed by Ottawa in some regions, was an obvious target. Together, Telus and Clearnet have more spectrum than any other wireless company and will be required to divest some in Western Canada to meet federal limits. Clearnet was also attractive for its national subscriber base, which is concentrated in Central Canada, where Telus is weak. In Entwistle’s view, the merger “vaults us overnight into a market leadership position. Boom, we’re there, in one fell swoop.”

For Cope, the cash-and-stock deal offers investors a whack of dough: at a 53-per-cent premium over Clearnet’s pre-announcement price of $45.80, “it’s a very good deal for shareholders,” he says. The money-losing company needed a partner with deep pockets—Telus agreed to take on about $2 billion in debt. And Telus also brings to Clearnet, a purely wireless company, options for bundling a host of other phone services, an increasingly important marketing strategy, Cope says.

Most analysts applauded the merger, and Clearnet’s price rose to $64.55 by week’s end. (Telus shares fell by 11 per cent, due to concerns about earnings dilution and the new debt load.) Even rivals profess to like the deal. “From our point of view, it’s great because it takes away a competitor,” says Charles Hoffman, chief executive of Rogers AT&T Wireless. The merger is also likely to create chaos among consumers, Hoffman says, and “were planning to exploit the confusion that will reign over there.”

Entwistle vows the pace at Telus won’t slow. There will be more Internet-oriented acquisitions in the next 12 to 18 months. “I’m talking about successive deals rather than one big bang, which is what we affected through the acquisition of Clearnet,” he says.

This week, Cope will join Entwisde on an exhaustive road show to explain the deal to major investors in a dozen North American cities. Like Cope, Entwisde recendy moved his family. “You know the list they have in magazines in terms of the most stressful things you can do in your life?” asked Entwisde last week from Boston. “I tried to do them all concurrendy—change jobs, move house. It has been quite a pace, to be truthful.” For both men, it will be handy market research as they try to sell Canadians on wireless gadgets to help them deal with an ever-faster 21st century. CD 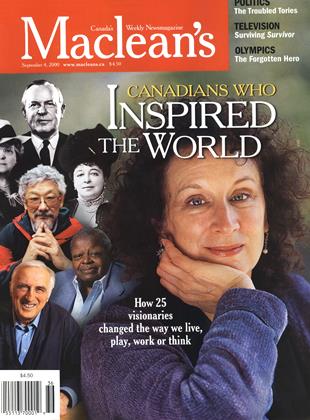