It wasn’t easy getting the owner of the traditional Chinese medicine shop in Montreal to admit she sold bear gallbladders and items made with bear bile. “It’s illegal to have these things,” the proprietor told Hsieh Yi, an undercover agent hired by the London-based World Society for the Protection of Animals. Posing as a customer, Hsieh—who uses a pseudonym—persisted, talking at length about the medicinal benefits of products such as fel ursi, for the treatment of hemorrhoids. Eventually, when the shopkeeper was convinced she had found a sincere buyer, she reached behind the counter and brought out ointments, botdes of oil and pills all made with bear bile. She even revealed she used to carry bear gallbladders. “But not anymore,” Hsieh later told Macleans. “She did not know any Canadian hunters to buy them from.”

The shopkeeper’s initial discretion is understandable. Retailers convicted of selling a single product made with contraband animal parts face up to five years in jail and fines up to $ 150,000 in Canada. Yet Hsieh, who undertook similar undercover investigations in 33 shops in Quebec, Ontario and British Columbia last fall, says she found that more than twothirds of them sold medicines made with bear bile.

She also claims that three shops sold bear gallbladders, which are used for a number of disorders including fever, skin lesions and pain relief. Two store owners even admitted the organs came from bears that had been poached in Canada; gallbladders sold for as much as $800. “Sometimes the items were openly displayed on the shelves,” says Hsieh.

The illicit trade in body parts isn’t restricted to providing components for traditional medicines. There are coundess dealers across Canada selling meat and bones and fur from poached or endangered species, and they are willing to risk the legal consequences because the demand is so strong. Wealthy clients around the world have paid as much as $23,000 for a single shahtoosh shawl made with the fine hair off the skin of endangered Tibetan antelopes. And buyers will pay top dollar for imported bushmeat, such as monkeys from Africa or exotic fish. Then there’s jewelry made from the tusks

of poached elephants, or chichi handbags made from the skins of rare reptiles. It all adds up to a retail trade that legal experts estimate to be worth millions every year in Canada, and billions worldwide. “It never ceases to surprise me how much of this I see or what people will do to trade illicit products,” said a veteran federal Wildlife Service enforcement officer, who asked to remain anonymous.

The trade is so vast, in fact, that authorities sometimes make busts quite by accident. Just last December, officers of the Canada Customs and Revenue Agency in Halifax seized about 4,400 products made from elephant ivory during a routine training exercise. As part of a drill, a recruit opened a suitcase that, to officials’ great surprise, contained bracelets, necklaces, earrings and carvings of elephants and Disney characters that were destined for sale in gift shops. An On-

taño man has been charged with importing the goods estimated to be worth as much as $75,000. It is unknown whether the ivory was from African or Indian elephants, or how many animals died to provide the tusks.

The campaign against harvesting animals for these purposes is designed to protect endangered species. But generally, it is a losing battle. The use of rhinoceros horn in Eastern medicine to treat fever and nosebleed and in the Middle East for making decorative dagger handles has decimated rhinoceros populations. Similarly, every species of tiger and all bears in Asia, including the panda and Asiatic black bear, are declining rapidly because of the popularity of their skins as collectors’ items, and their bones and organs for medicinal uses. Those animals are supposed to be protected by the Convention on International Trade in Endangered Species of Wild Fauna and Flora. The agreement, endorsed by 152 nations, prohibits the international sale of endangered species and their parts, and regulates the trade of other animals whose survival in the wild is at risk. Yet for many, the slide towards extinction continues.

Critics claim that Canada’s posidon is contradictory. It is one of the early signatories of CITES, yet it does not commit the resources to enforce the CITES mandate. As well, Ottawa recendy began to allow tourists and new Canadians to import products made from CITESprotected animals. Except in a few instances, the exemption does not apply to live animals, but it does enable the importation of conch shells, rare coral and some products made from exotic skins including shahtoosh shawls and ivory, as long as the items are not for commercial sale. “Canada has opened yet another loophole for smuggling wildlife parts and prod“ ucts,” says Nathalie Chalifour of the World Wildlife Fund. Wildlife Service officers, however, say the exemption was necessary. “When we spend most of our time confiscating tourist material, we can’t focus on the people doing the illegal trading,” says Gary Colgan, Ontario chief of Environment Canada’s wildlife enforcement division. “We were forced to make a choice: the litde guys or the larger importers and smugglers.”

Domestically, dealers and poachers trade in native products, for local consumption as well as for export. It is illegal in every province to sell meat from wild hunted game such as moose and deer but it is widely available for sale. There is also a market for parts, such as bear paws for soup. No one is certain how many animals are being slaughtered for food and other illegal purposes. “We know bears are being killed, but we just don’t know the magnitude because we aren’t finding all the carcasses,” says David Ward, co-ordinator of special investigations for Manitoba’s ministry of natural resources. The penal-

ties are not a serious disincentive. Last spring in Surrey, B.C., two men who pleaded guilty to selling 18 bear gallbladders for medicinal use were fined only $7,000 each and served only 17 days in jail. “This speaks to how we as society view animals,” says Charlotte Montgomery, author of Blood Relations: Animals, Humans and Politics. “They are a very low priority.”

That said, the majority of bear products sold in traditional Chinese medicine shops are smuggled in from Asia. In China, the sale of bear products is legal, and according to the Chinese ministry of forestry, there are 247 farms where thousands of bears are “milked” for their bile. Chinese authorities insist the bears are treated humanely, but recendy they acknowledged that some smaller farms are run poorly. Undercover videos shot last year at poorly operated farms in six Chinese provinces showed cages that were so small the animals could barely turn around. The bears exhibited aberrant social behaviour—owners even admitted that mothers had been known to eat their cubs.

Members of wildlife conservation groups who have visited these farms claim the majority of the animals die prematurely. Conservation groups also report that about 50 per cent of the bears die during the bile extraction process, which involves surgically inserting a tube into the animal’s abdomen, often without the aid of a veterinarian or anesthesia.

But at least those animals were used to make medicines. The majority of animals are slaughtered simply because the poachers and dealers can make a profit catering 2

to the fashions and tastes of well heeled consumers. Over the past few years, more than a hundred New York City socialites and celebrities, including fashion model Christie Brinkley, were subpoenaed to testify in a U.S. district court for buying shawls made of shahtoosh. Two dealers were convicted in January of trading the items, which many of the socialites purchased at a 1994 fund-raising event benefiting cancer.

To satisfy the demand for shahtoosh shawls, poachers annually kill an estimated 20,000 Tibetan antelope, known as chiru. They have to be skinned to gather the ultrafine wool that produces the soft, light and warm garments. As a result, populations of chiru have been decimated, falling to about 75,000 today from more than one million in 1900. Wildlife experts predict the animal could soon be extinct, and it’s not difficult to understand why. It takes the skins of at least three chiru to produce a single shawl, and on any given day, there are hundreds of shawls available for sale. They sell for thousands of dollars—but the real cost is much higher. E33 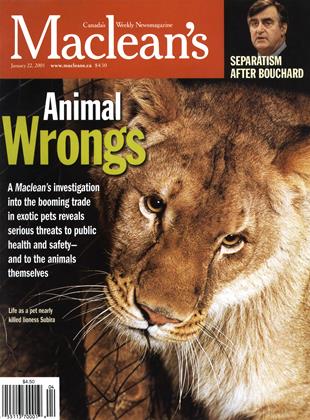