OVER AND UNDER ACHIEVERS

News you can’t use: the G G sends love that dares to speak its name! Hockeys most famed franchise—les Américains de Montréal! And life in the slow lane with ex-MPs!

Aline Chrétien: The PM’s wife gets honorary diploma from Royal Conservatory of Music. Her next feat: teaching her husband how to go out on a high note.

^The Montreal Canadiens: Now true in name only.

Adrienne Clarkson: So we know that Canada’s head of state will send best wishes in return for a wedding invite. She’s just not allowed to wish couples a gay old time.

Former MPs: New report says public life is tough on marriage and future career prospects—but most would do it all again. You can run and you can hide.

^ Our redesigned sawbuck: The new $10 bill is supposed to promote national unity. A better idea would be a loon worth more than 70t (U.S.).

Michael Greyeyes, a Plains Creefrom Qu Appelle Valley Sask., was the first aboriginal boy—then age 10—accepted into the prestigious National Ballet School in Toronto, in 1977. After graduating in 1987, he spent three years with the company before leaving for New York City to join the Eliot Feld Ballet. In 1993, he started acting. Greyeyes, now 33, talked to Maclean’s Reporter Catherine Roberts about his journey to Hollywood.

I really wasn’t interested in dance. My older sister, Phyllis, was taking lessons and I had to wait with my mother for her to finish. I decided I might as well take lessons, too. It was Phyllis who decided to apply to National Ballet School. I never knew that Phyllis had put an application in for both of us. It was her dream, so it was really hard when I got in and she didn’t.

My mother remembered the loneliness of being at a residential school in Saskatchewan, away from her family, and vowed never to let that happen to her children. So [my parents] both took a leave of absence from their jobs to join me. After I was accepted to the school hill time, they moved permanently to Toronto. No one has ever gone back.

I left Toronto to work with Eliot Feld as a soloist. When I was with the National Ballet of Canada there were about 70 dancers, but Feld’s company had 20 dancers. It was very innovative. I also met my wife, Nancy. It was a great time. I was 22 years old [and] living large.

I never had acting experience when I got my first role in the movie Gerónimo. But it wasn’t till I landed the role of Crazy Horse [in the 1997 movie of the same name] that things started to change. [In] my latest feature, Skipped Parts, the character I play is a cowboy who falls in love with Lydia, played by Jennifer Jason Leigh. Ironically, I was cast for the movie while I was on holiday in Europe. If there was ever a role that I was destined to get, it was that one.

Not the Oscars, but not bad at all

In the struggle to make the Canadian film industry as glamorous as its Hollywood counterpart, this year the Genie Awards will give presenters high-end gift baskets.

The Academy Awards began passing out baskets stuffed with the latest in luxury and electronic swag back in 1989. Last year’s vermina shawl from Pamela Dennis. While sion included a $1,275 David Yurman the Genies can’t match the estimated charm bracelet, $398 Bally men’s Ha$15,000 price tag of the Oscar basket, vana loafers and a $ 1,650 beaded pashthese items will still be welcome:

Out of the Web, a mystery is solved

A digital camera, the Internet and a helpful stranger on the other side of the Atlantic Ocean recently helped solve an 82-year-old mystery for a Canadian family. Don Dulmage, 50, of Prince Edward County, Ont., was immediately intrigued when, at age 9, he saw a picture in his grandfather’s home of an unknown relative dressed in a military uniform.

He didn’t ask for details then, but decades later he learned that the man, who bore what the family calls “the Dulmage Squint,” was his great uncle Hubert, who was killed in France shortly before the end of the First World War. But, says Dulmage, the family “never knew where he was buried, or where he was killed.”

Last November, Dulmage’s wife, Linda, returned from a meeting of a local women’s group to which one of the members had brought a 1919 edition of The Picton Gazette. It had a photo of great uncle Hu-

bert, and listed Sept. 3,1918, as the date on which he had been killed. That led Dulmage to begin a new search of the Canadian Archives Web site (www.archives.ca), where he discovered a page on the War Grave commission that listed where Hubert’s body lay. Then, Dulmage, a mechanic and automobile writer, took a shot in the dark and passed on the information he had collected to a work-related contact in France that he had recendy made via the Internet.

speaks a bit of French: they managed to exchange details with the help of a button on the federal-government archives site that translates between English and French. It turned out that Goolaerts lived 50 km from the burial site, the Dury Mill Memorial Cemetery near Pasde-Calais. Two hours later, Dulmage checked his e-mail to find a digital photograph of the grave. “Joyeux Noël, mon ami,” read the message. Said Dulmage: “The guy had driven up there and found the grave and took a picture. Eighty-two years we never knew where he was. One e-mail, one shot. I just couldn’t believe it.”

“Canadians should be able to expect the Governor General to respect and uphold their basic values and laws.”

president of the Canadian Conference of Catholic Bishops, complains in a letter to Gov.

Gen. Adrienne Clarkson about an e-mail she sent extending best wishes to a male couple about to marry. The couple had invited her to the wedding.

-Stewart Wheeler, press secretary to Clarkson, responds. Clarkson’s office said her letter was a pro forma response and not a political statement.

“Bags can fall off carts in the airport. We try to ensure it doesn’t happen. However, it can.”

-Laura Cooke, an Air Canada spokeswoman, discusses an incident videotaped by a passenger in which staff repeatedly detoured around luggage fallen from a baggage cart without picking it up. 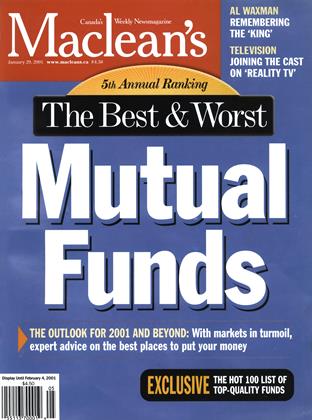