It is 7 a.m. on a frigid December day, and the emergency department at Cornwall General Hospital is under pressure. Half a dozen patients lie on stretchers in rooms and hallways because there are no beds available. Christianne Godard, a critical-care nurse who has worked two 12-hour shifts in the preceding three days, arrives at the hospital after being called in for an extra fourhour shift because of the backlog. Backlogs these days are not unusual. One reason is a shortage of family physicians in this industrial city of 47,000 about 400 km east of Toronto. Another is the budget pressures that have reduced the number of beds at Cornwall General from about 200 a decade ago to 88.

Today, Godard is looking after patients with a variety of illnesses—several suffer from congestive heart failure, there is a cancer patient with pneumonia and several elderly patients with chronic lung problems. Godard begins work with the familiar feeling of not being able to do enough with the limited time and resources available. “I wanted to be a nurse so I could help people,” she says. “But the way things are now, we can’t give patients the care they should be getting, and that bothers me.”

Most of Godard’s colleagues share her frustration. A decade ago, veterans among them say, it was unheard of for admitted patients to be kept even briefly in the emergency department. Now, long waits are the norm. And along with

the shortage of beds, nurses say their own numbers are inadequate. There are currently 56 full-time nurses, down from 87 a decade ago, as well as 99 part-time nurses and 38 registered practical nurses—in effect, nurse’s aides—20 fewer than a decade ago. Meanwhile, nurses complain that workloads are increasing. With the number of support workers reduced by budget cuts, nurses have to help move patients from one place to another, leaving them with less time for patient care. “There used to be lulls in the work

where you could calm down and recuperate,” says nurse Judy Kyte, who has nursed at Cornwall General for 23 years. “Now, there aren’t any lulls.”

“our nurses only have time for the essentials—they can’t give patients the emotional support and personal attention they are trained to give, and they feel frustrated.” The hospital needs more money to hire f I nurses and reopen beds, adds Peb| terson. “But we’ve been running | deficits just to stay at our present staffing levels. We keep hearing that governments are waking up to health-care needs— but we’ll believe it when we see it.”

With conditions as they are, nurses at Cornwall General are dropping out of the profession—or reducing their commitment. Nurse Maureen McDermid gave up her full-time job in November and switched to an arrangement that allows her and a colleague to share 75 hours of work spread over two-week periods. “I still want to be a nurse,” says McDermid. “But not full time. I’m not willing to exhaust myself that way anymore.” Victoria Fortier, a registered nurse for 23 years, says that “we’re asked to be caring professionals, with limited staff and limited resources. I was upset when I went home last night, because we had a cancer patient, in pain, lying on a stretcher in the hallway all day—and I didn’t have time to give her the care and attention she needed.” During the morning, Godard is involved with several patients whose problems typify the difficulties facing hospital staff. One is a woman in her 50s with severe throat inflammation. In the hope of pinpointing the cause, doctors have ordered a CAT scan. But Cornwall General doesn’t

have one of those high-tech imaging machines, so the patient will have to go to the city’s other major hospital, Hôtel Dieu, about five blocks away. “It’s hard on the patient,” says Godard,

“and a nurse will have to go with her.” Another patient is a woman in her 80s who has fractured her spine. She also has arrived with an untreated bladder condition. “There’s only one urologist in Cornwall,” says Godard. “It’s hard to get him.”

That patient has another problem. To ward off possible strokes, she has been taking drugs to thin her blood. But she had taken excessive amounts of the medication, with the result that her blood is too thin, posing the risk that an accidental injury could cause a potentially fatal blood loss. “The real question,” says Godard, “is why was she taking so much of the drug? Is there some kind of problem at home that needs to be looked at? If I had more time, I would try to look into this—and not being able to leaves me feeling dissatisfied and sort of guilty.”

There are other nagging sources of discontent. Although many of the nurses have university degrees—Godard has two bachelor degrees, in science and nursing—they say they re-

ceive no added pay or status as a result. And many of the nurses resent the authoritarian attitudes of doctors. “I’m a highly trained health-care professional,” says Godard. “I want to have a little more influence in my job.” For the most part, pay is not an issue. Working an average of about 20 hours a week, Godard estimates that she earns $30,000 a year. And a full-time nurse at Cornwall General can earn as much as $57,000 a year. “Money is not the problem,” says Fortier. “It’s job satisfaction.”

Still, like their colleagues across Canada, nurses at Cornwall General are full of stories about salaries 10 per cent higher than in Canada, $2,000 signing bonuses and superior fringe benefits that come with nursing jobs in the United States. “I’m a Canadian nurse,” says Fortier. “I want to work here, but it’s getting a lot harder to tough it out.” Godard, who is married and has a 15-month-old daughter, says she sometimes thinks of abandoning her profession. As a teenager, she was drawn to nursing because she thought of it as an honourable career. “But we’re so rushed now that patient care just falls by the wayside,” she says. “This isn’t the way I wanted it to be.” CD

Kyte (left), Godard and Fortier with patient Connie Leblanc: ‘we can’t give patients the care they should be getting, and that bothers me’ 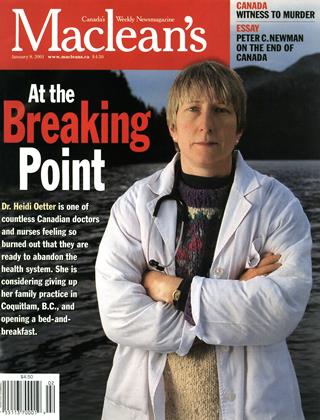